Rise of the Virginia 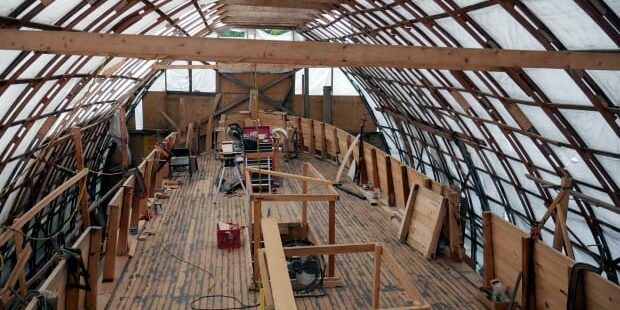 This June, after over 25 years of research, planning and work, the completed replica of the Virginia will be launched from the Bath Freight Shed in Bath, Maine. This former railway station has been converted into a maritime hidden gem, featuring a small visitor center and educational programs in addition to being the site where countless volunteers have spent two decades hand-building the 51ft Virginia.

The original Virginia was a 17th-century pinnace built by a group of colonists who’d settled the Popham Colony, a contemporary of the famous Jamestown colony in Virginia, at the mouth of the Kennebec River. Though short-lived, the Popham Colony did produce the first ocean-going vessel built in the Americas. Although little is known about the original vessel, in light of the historical significance of both the ship and the colony, a group of dedicated volunteers set out to discover what the original ship would have looked like and build a ship to a similar design that could be used to teach visitors to the community about the local history. A location was found, money was raised and timbers were cut.

“People come from all over the country [to see the work on the ship], and they’re amazed by our project. It makes us think we’re doing a lot of good things. It’s been a labor of love for us,” says Orman Himes, CEO of Maine’s First Ship, the organization behind the reconstruction effort. Himes’ own involvement in the project stemmed from time spent at the excavation site of the Popham Colony, which has been used as a sort of time capsule to help archaeologists learn more about early American colonists. For more on the Virginia and the decades-long effort to bring her back to life, see the Jan/Feb 2022 issue of SAIL or visit sailmagazine.com.

To celebrate the ship’s launch, much of Bath’s Commercial Street and Waterfront Park will host a street fair with music, special guests, local food vendors, regional artists and even a marine-themed yard sale. For details, visit mfship.org.