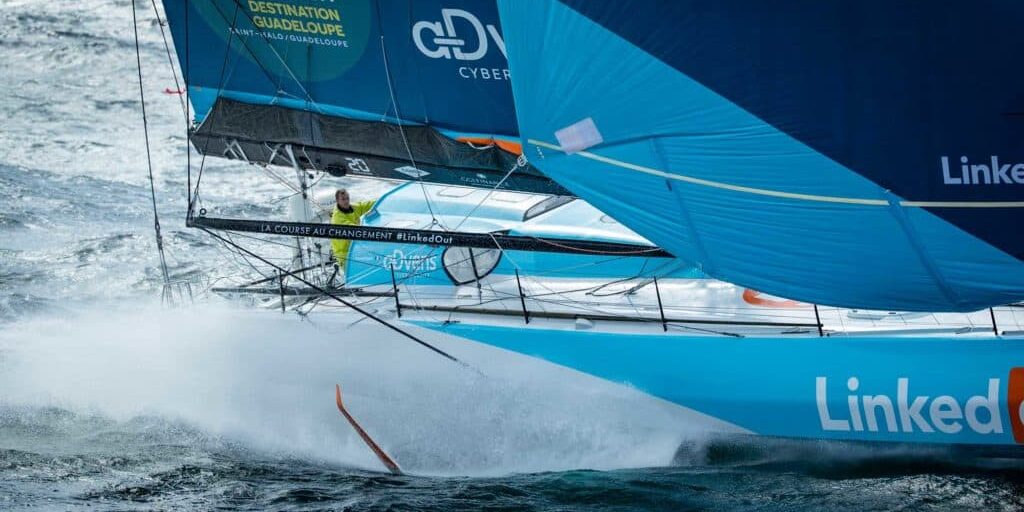 Thomas Ruyant has put thousands of miles on his IMOCA 60 LinkedOut to get it to its maximum potential, which netted the French solo sailor a hard-fought win in the 2022 edition of the Route du Rhum Destination Guadaloupe. Pierre Bouras – TR Racing

Thomas Ruyant won the IMOCA class in the 12th Route du Rhum-Destination Guadeloupe when he crossed the finish line off Pointe-à-Pitre at 06:51:25hrs UTC Monday November 21. His elapsed time of 11 days 17hours 36minutes 25seconds beats the course record for the class, which was 12d 04h 38min 55s, set in 2012 by Francois Gabart by 11hrs 02min 30secs.

The 41-year-old from Dunkirk adds the highly coveted solo Route du Rhum victory to the two-handed Transat Jacques Vabre race triumph he achieved a year ago with Morgan Lagravière on a similar course racing from Le Havre to Martinique.

Ruyant was tipped as solid podium contender when this legendary 3,542 miles course left Saint-Malo on Wednesday 9th November and many had him as the solo sailor most likely to break the recent winning run of the dominant Charlie Dalin (Apivia).

Although Dalin led the race from the start, and was 90 miles ahead during the passage of a ridge of light winds after the Azores, Ruyant broke west and outmaneuvered Dalin on Friday morning and took the lead which he held to the finish line this morning.

Winning from the biggest and most competitive IMOCA fleet ever assembled for a Route du Rhum, that included 38 boats and seven new builds starting from Saint-Malo, Ruyant extends an excellent record racing solo and two handed across the Atlantic, which started when he won the 2009 Mini Transat to Salvador de Bahia, Brazil. He also won the Transat AG2R in 2018 with Adrien Hardy in the Figaro.

“I make no secret of it, I am only here to win. That is all that interests me. I have one of the best boats in the fleet. There are newer boats on the start line but our 2019 Verdier design is fully optimized to the best level of development,” said Ruyant in Saint-Malo. Winning is a fitting farewell to Ruyant’s boat which he is replacing with a new IMOCA ahead of the 2024 Vendée Globe.

He was Dalin’s most dogged rival on the last Vendée ­Globe, tussling over the lead until Ruyant broke his port foil early in the Southern Ocean going on to finish sixth. Dalin was a little over seventeen miles behind this morning when Ruyant crossed the finish line to take the biggest victory of his career.

On her first big solo transoceanic IMOCA race Mettraux, who sails the well optimised VPLP designed former Charal, has been with the leading group of boats since Cape Finisterre. She went furthest west at the Azores, passing between the islands, and has remained seventh since then, other than momentarily passing Maxime Sorel for sixth whilst the skipper of V&B Mayenne had pilot problems.

Multi-talented Mettraux has graduated to the IMOCA through lake and inshore multihull racing, and the Figaro class, finishing seventh in 2017 and 11th in 2018 in La Solitaire du Figaro. She finished 6th in the Volvo Ocean Race with Team SCA in 2015, and won the race in 2018 with Route du Rhum Ultim class winner Charles Caudrelier onboard Dongfeng Race Team. In the last two years she has sailed thousands of training and racing miles on the IMOCAs of 11th Hour Racing with whom she will shortly race The Ocean Race. 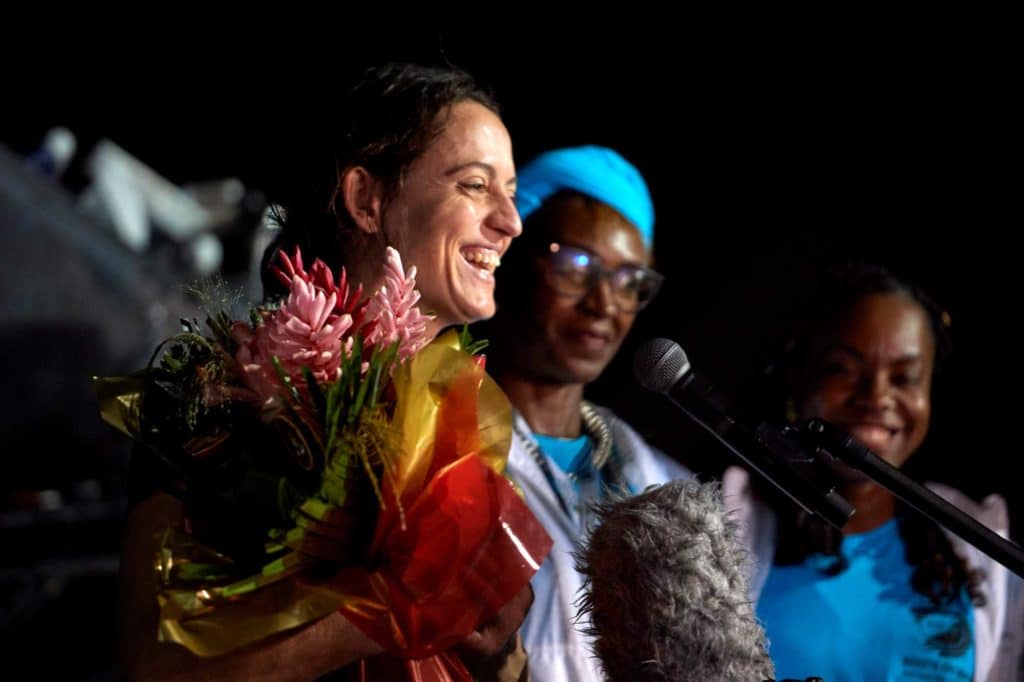 Welcomed into the dock at Pointe-à-Pitre’s Memorial ACTe at just before midnight local time by a strong Swiss contingent of family and friends, Mettraux looked tired after negotiating some big torrential rain squalls interspersed with light winds during the final miles round the island.

“I am pretty broken right now,” declared Mettraux who has four siblings who are all professional sailors, all learning to sail on their native Lake Geneve. “Now I know why everyone talks about the end of this race. This is one of the biggest races you can do with a big story attached to it and even this time you hear about all the stuff that happens, people being rescued, there is a lot of history behind it and this one adds to it. I think the first bit with the fronts was pretty much what I expected but the second half was harder, tougher in the trade winds.

“The result is very positive and I see that there are still things to work on to progress and play more with the guys up front, which is very encouraging.”

As first female, Mettraux leads an exceptional performance of the top women racing in the IMOCA class, with Isabel Joschke (MACSF) lying in ninth and due to finish early Tuesday morning, local time, and Britain’s tenth placed Pip Hare (Medallia) expected in the early afternoon.

Mettraux commented, “That is cool. Pip is not far behind and it is nice to see us all sailing well and doing well.”

Her seventh place is all the more impressive given that she has only had three months of solo preparation with Jérémie Beyou’s former Charal, training under the umbrella of his Beyou Racing.

“For me this race is the next step, having been part of La Solitaire and The Ocean Race this is another race but for me with very short preparation it was a bit special. I was thinking, ‘OK if you can make it and finish that is a big milestone’. For the short season I have had and also the program I had with 11th Hour Racing to manage to be the start of the race, to do it, and to finish well is great. It has been a pretty busy year and it is only getting busier.”

Her success today will compensate for disappointment on last year’s Transat Jacques Vabre when she and co-skipper Simon Fisher lost their mast off the NW of Spain.

“I was thinking about that a lot, when you are sailing on your own and the conditions are the same, then you can’t help yourself.”