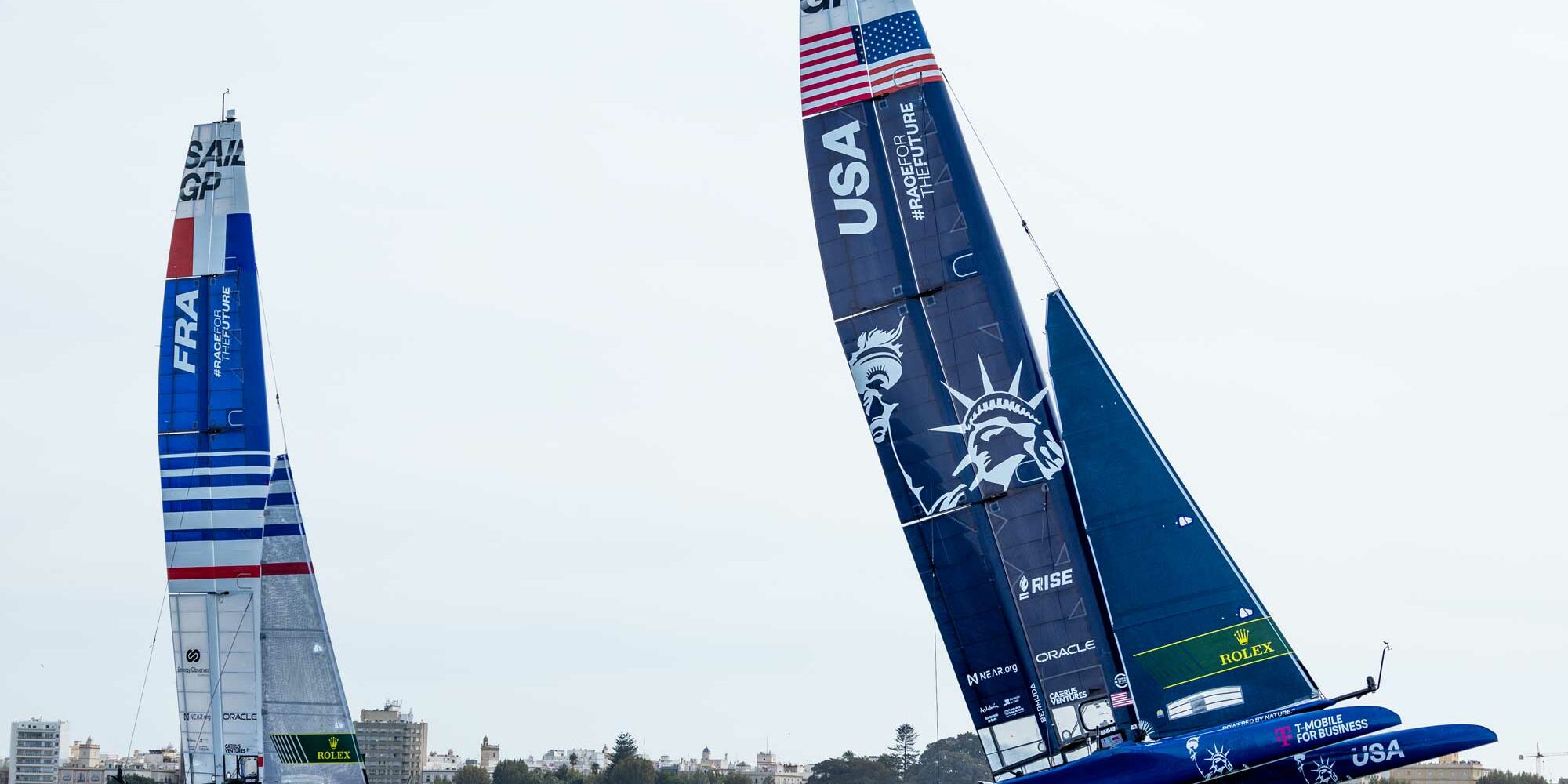 SailGP Team USA coughed up its lead in the Cadiz final after loosing grip through the second leeward gate, opening the door for the French to step ahead and control the race for the final two legs. Ian Walton for SailGP

In the closest-ever finish to a SailGP event, skipper Quentin Delapierre led the France SailGP Team to a stunning victory by just three seconds over Jimmy Spithill’s U.S. team to claim the team’s first event win in SailGP. The event win in Andalucía – Cádiz sees the French team rocket into the all-important top three of the championship standings after six events of Season 3.

The resurgence of Spithill’s team continued as it made a second straight final. Tom Slingsby’s Australian team struggled in the three-boat final to finish a distant third, but it was an improved weekend from the Australians who had missed the last two event finals. The team has also stretched its lead over New Zealand in the season standings to 4 points.

On an eye-catching but heartbreaking day for the Canadian team, Phil Robertson won both of the day’s races, but it wasn’t enough to overcome a poor Day 1 effort and the newcomers missed the final by 1 point.

But it was Delapierre who thrilled the crowds with a masterful final performance, as light winds saw just four athletes on board the F50, with the driver joined by Kevin Peponnet, Matthieu Vandame and Manon Audinet.

Delapierre said: “This feels really, really good. It’s a very special day for the French team, we have come back from so far in the field to the top, I mean last season we were last in Cádiz and I think the team pushed really hard since the beginning of this season to keep the learning curve increasing so we are really happy.”

Strategist – and grinder for the final race – Audinet said: “It’s just so awesome, what a crazy feeling to win this event all together, I’m just so happy. I think Quentin likes a challenge and the last race was definitely a challenge and he was able to pull it all together and get us ready and he was just pushing us to be at our best.”

Team SailGP France sailors celebrate their first event win, which vaulted them up the season leaderboard and makes them a going concern for the top three teams. Ricardo Pinto for SailGP

Back to back strong performances from Spithill sees his team back in contention for a second straight Season Grand Final appearance.

Spithill said: “The team was under real pressure going into the last two events, but we have stuck together and it’s given us a lot of belief and a lot of confidence. Our coach Philippe [Presti] has been spending a lot of long hours with the team collectively and individually and we’ve got to keep this going. It’s a great result for the team to get a big points spread like that and we’re going to try and carry that through to Dubai. I’m really impressed with how the team is coming together.”

The home team from Spain, driven by Jordi Xammar, failed to recreate its solid day one effort and finished the event in seventh place. Xammar said: “Somehow the way we sail doesn’t seem to be reflected in the results. I thought this was the best we’d sailed and we still finished seventh. It just doesn’t seem to be our time yet no matter what we do. But you know what, it’s a long season, our time will come, we just need to keep going.”

With the European leg of Season 3 now concluded, SailGP’s global championship continues at the Dubai Sail Grand Prix presented by P&O Marinas on November 12 and 13.