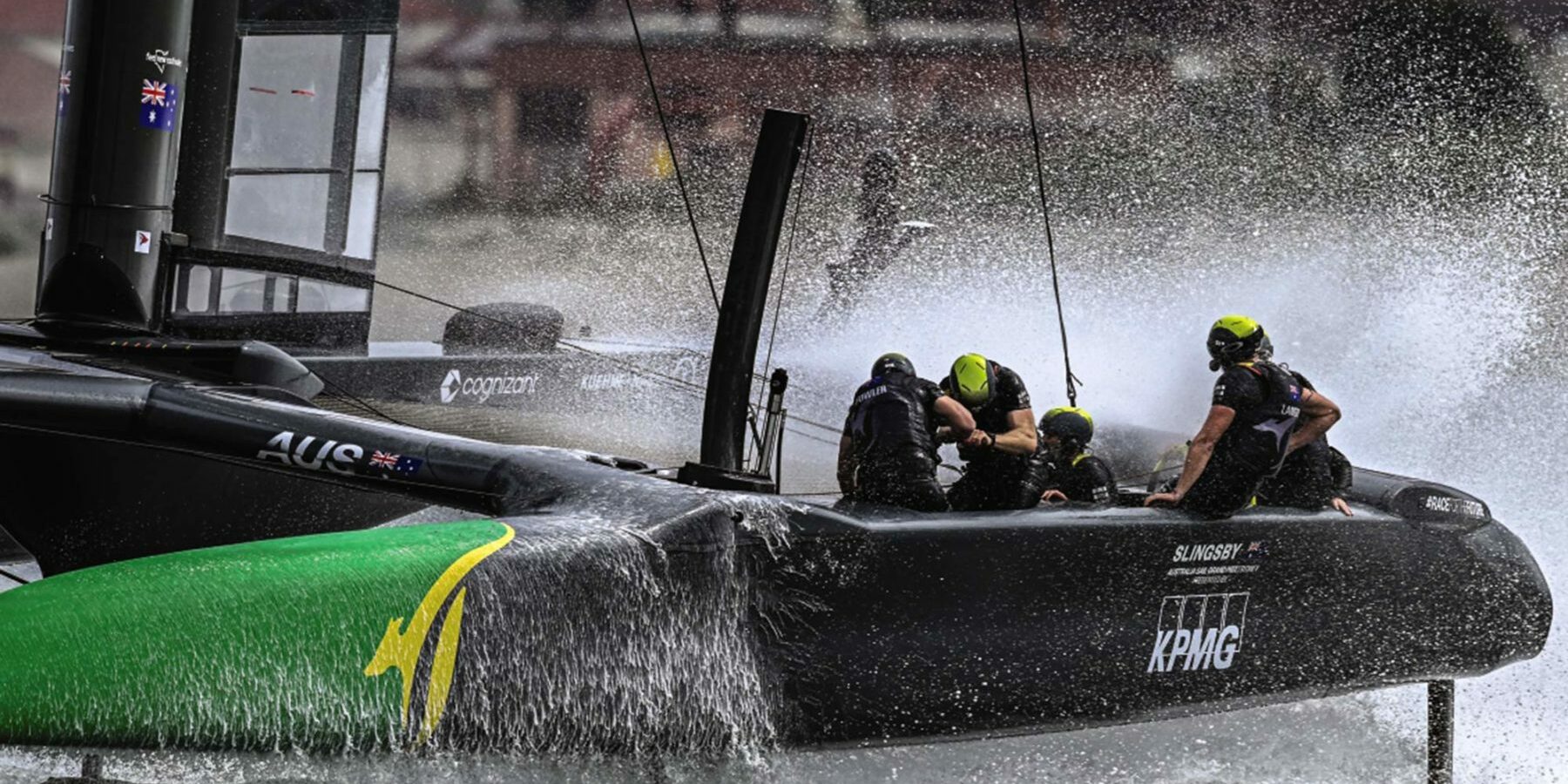 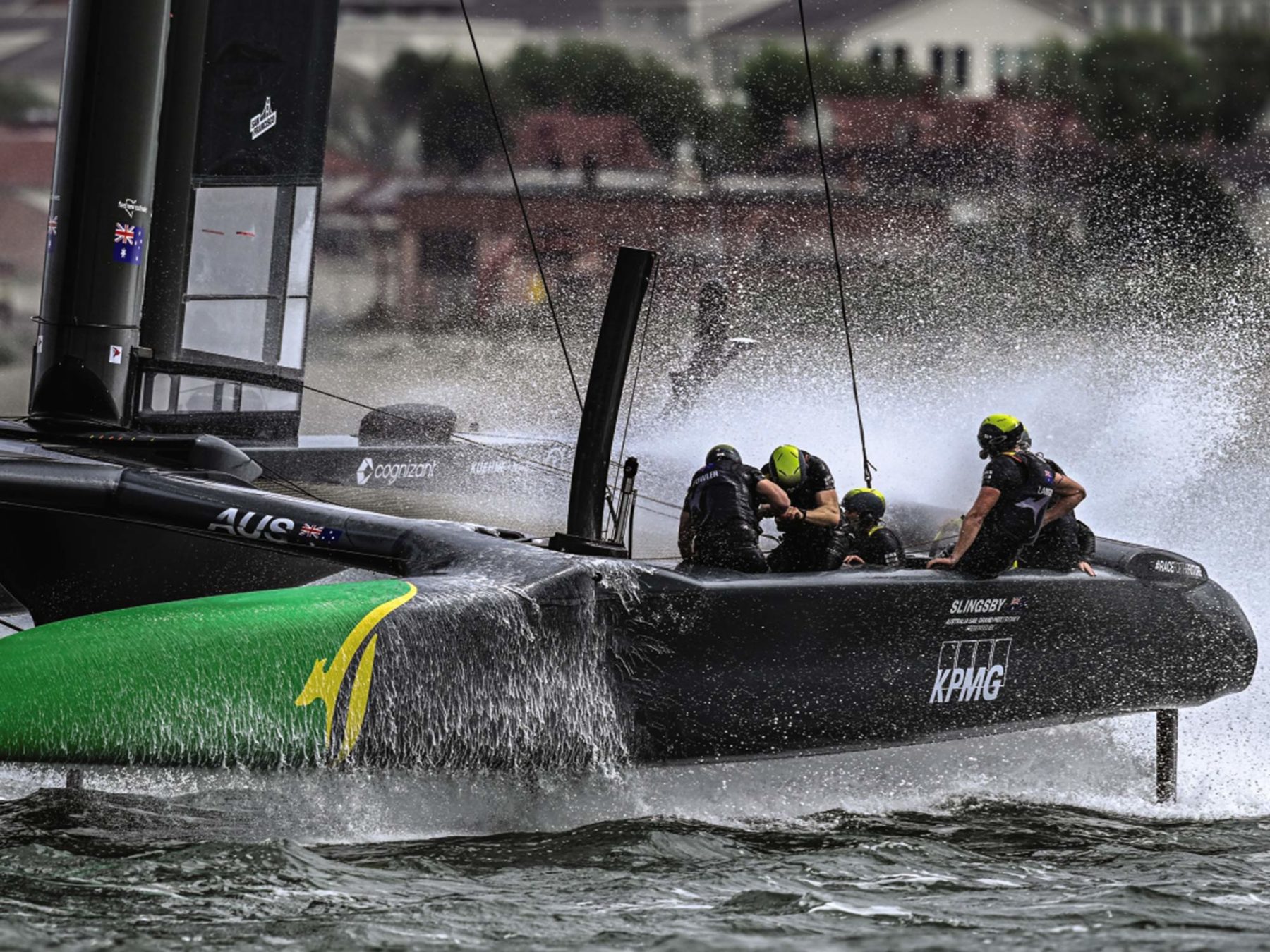 The Australia SailGP Team locks in the SailGP season title in ­San Francisco in March after winning the three-boat finale. Ricardo Pinto/SailGP

Just ask Australian Tom Slingsby, CEO and driver of the Australia SailGP Team. He’s now hit this seven-figure payday twice, most recently on San Francisco Bay, where he led his team to a decisive win in SailGP’s Season 2 Grand Final. Checks, trophies and Champagne fountains aside, this 2-for-2 win is also a classic sports story involving friendly, respectful rivalries between three top SailGP skippers and teams that stretch back to the America’s Cup in 2013, when wingsail-powered multihulls first raced across San Francisco Bay. One marked difference, of course, is the ocean of data that’s available for anyone seeking to decipher the critical ones and zeros.

While history suggested that the Australia SailGP Team would win SailGP’s season-ender in March, the outcome was far from certain going into the preceding Mubadala United States Sail Grand Prix. Slingsby and his mates had won four of eight regular-season regattas, but the United States SailGP Team, led by Jimmy Spithill, demonstrated impressive leaderboard consistency themselves, with five podium finishes. Nathan Outteridge and his Japan SailGP outfit also consistently proved their on-the-water prowess. But while the season’s title may have been Slingsby’s to lose, winning it required the Aussies to strike the right balance of boatspeed, boathandling, and that oldest and most ephemeral quality of competition: confidence.

In SailGP’s first season, Slingsby and company enjoyed $1 million worth of spoils and the first taste of Champagne from the SailGP trophy, while Outteridge and company ­finished second to the Australians. The US team, under different ­leadership, finished DFL.

The American team’s second run at the title and the money didn’t start off well either. It almost seemed as if they were cursed.

“Given everything that’s happened, we somehow made the finals,” Spithill says, referring to his team’s Season 2 setbacks, which included a no-fault regatta-ending collision with Japan in Bermuda, a collision with an unidentified floating object in Italy, rudder problems in Great Britain, and a badly timed maneuver ahead of the Denmark event that resulted in a leg cast and last-minute replacement for wing trimmer Paul Campbell-James. 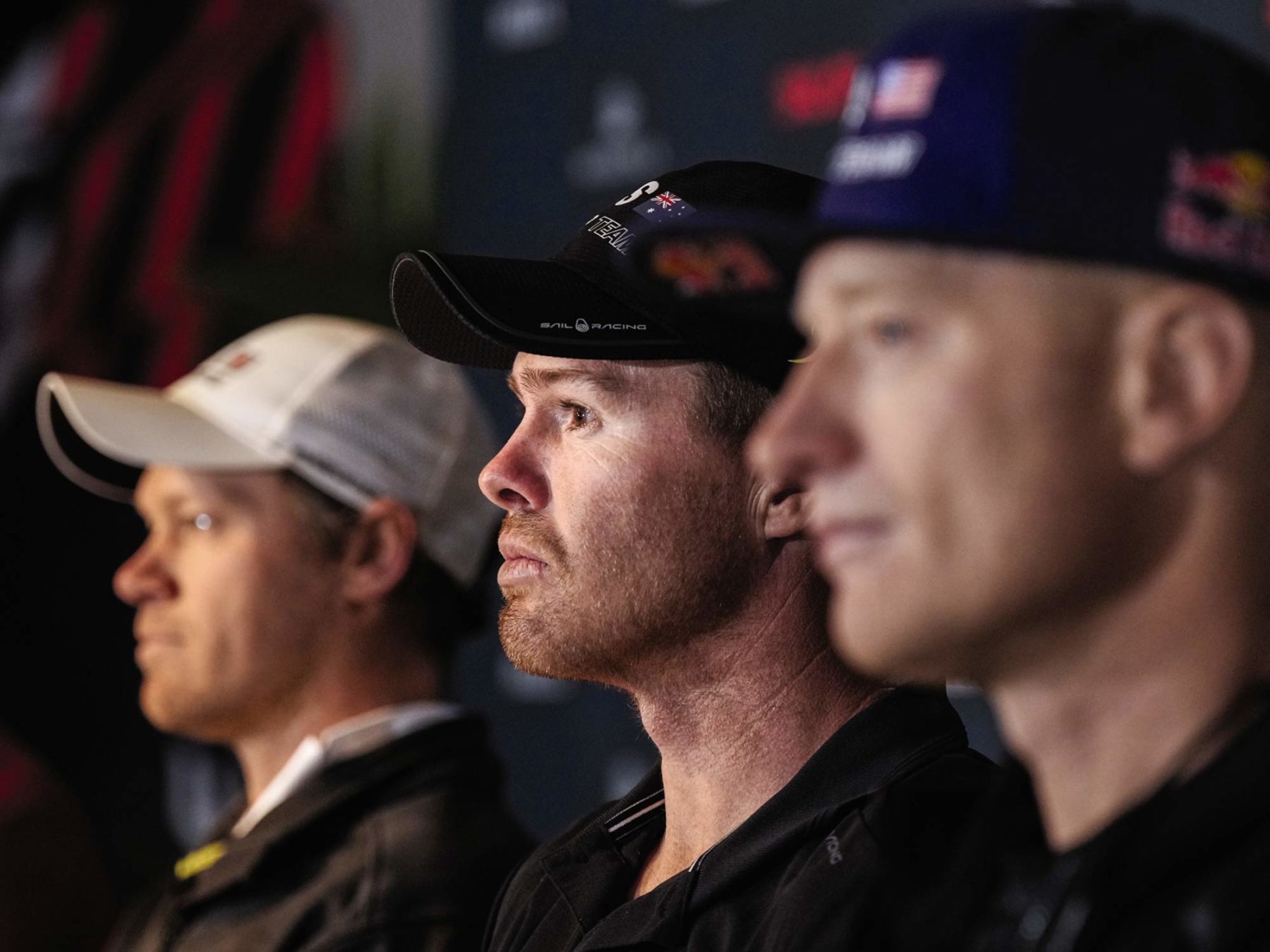 Amid this racecourse strife, however, the United States SailGP Team dug in and, ahead of the San Francisco event, earned their spot on the starting line of the three-boat Grand Final in San Francisco—alongside the Australian- and Japanese-flagged foilers. Outteridge led his team to wins in Italy and France, but a sixth-place finish in England plus a pair of fourth-place finishes in Spain and Australia meant the Japanese-flagged team wasn’t guaranteed a spot in the Grand Final race until they posted strong results in San Francisco.

“Initially, it was a story about eight teams, then it [became] a story about three teams,” Slingsby says. “Anyone who counts out Nathan Outteridge isn’t really on the ball.”

All three contending SailGP drivers, plus many of their ­crewmembers, were involved in the 34th America’s Cup, where wingsails and foils changed the game. Outteridge was a helmsman for Artemis Racing, while Slingsby served as Spithill’s strategist for Oracle Team USA’s comeback win against Emirates Team New Zealand.

“We know these guys extremely well—we’ve worked with them in the past,” Slingsby says. “It brings a level of respect. We know their skills, and maybe we know their weaknesses also.”

SailGP, however, isn’t the America’s Cup. This traveling grand-prix sailing circus is raced aboard one-design F50 ­catamarans, each of which carries 800 sensors producing more than 240,000 points of open-source data per second. As part of an information-shari ng approach, each team can study and dissect each other’s data. SailGP also records and shares on-the-water communications and video from each boat during races, which can often be equally important to performance measurements.

“The data is super helpful,” Slingsby says. But he admits his team’s usual up-fleet position means others are watching the Australian boat’s data more closely than the other way around. “But if we’re struggling a bit for speed, or we’re struggling a bit in our maneuverability, we’ll look at other teams to try and figure out what the differences are and how we can improve.” 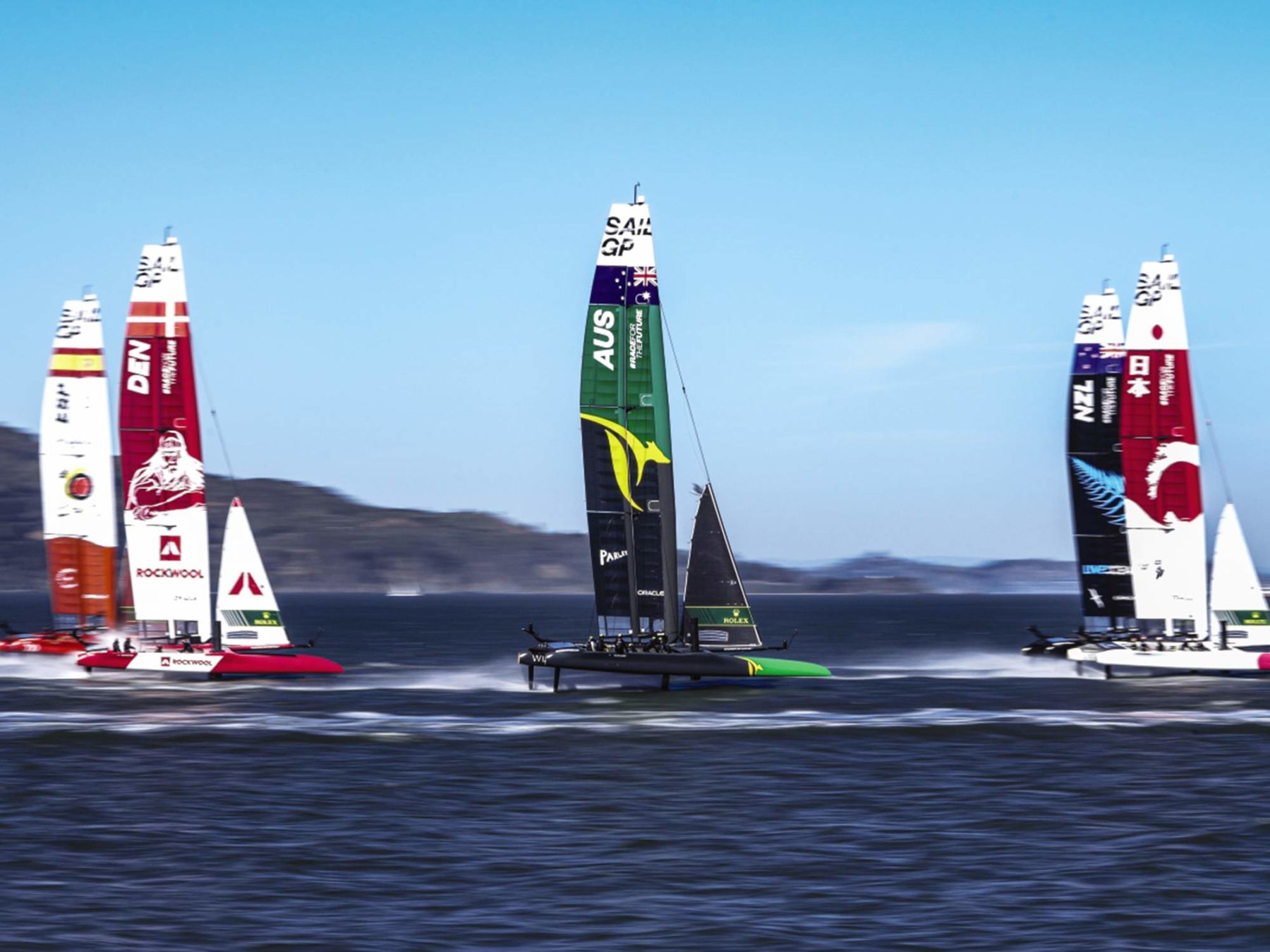 “It can be overwhelming if you don’t know what to look for,” Presti says when we meet in his office at SailGP’s Technical Base on San Francisco’s Pier 96 before the racing gets underway. He’s showcasing his proprietary software that synchronizes the team’s data with recorded audio and video feeds, which we watch on a pair of giant monitors.

“I can tag moments and study them later,” he says, explaining that he can take a photo from his coach boat or talk into his microphone, and the software synchronizes this media with the boat’s raw performance data.

“You’ve got a huge amount of data and you have a small amount of time training, and the goal is to find the golden stone,” Presti says. There are two ways to identify the most important information: “Either you go for the big data and you treat a lot of information, and you get some information back eventually,” he says. “Or you do it the other way around: You look at what you think will make a difference and then you dig around its specific information.”

While teams and coaches can operate in raw data, SailGP runs the numbers from all eight boats through Oracle’s cloud to create a second-level analysis that’s shared equally among teams. Presti presents both his and the league’s findings ­during team debriefs. 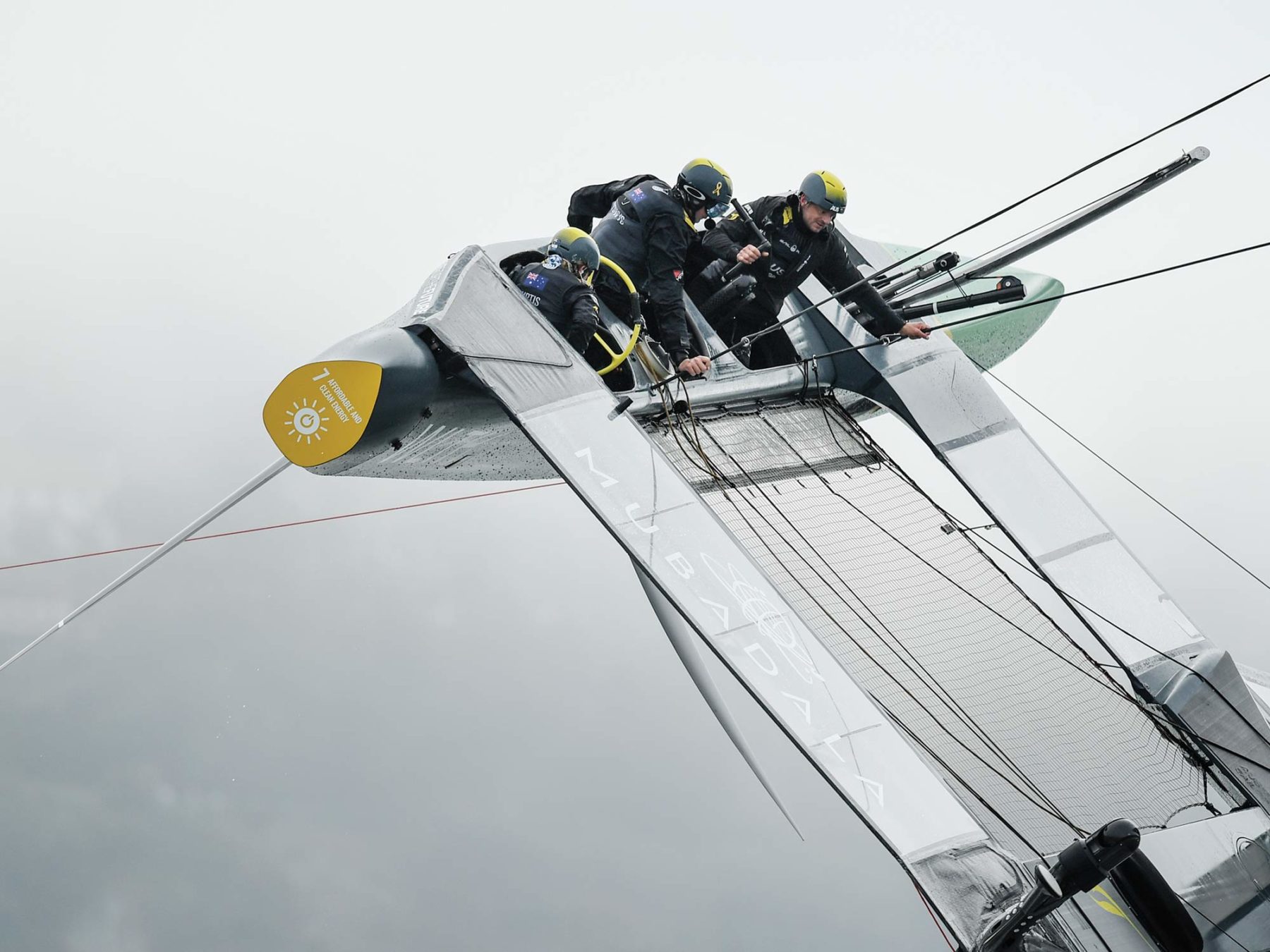 A capsize ahead of the San Francisco finale set the ­Australian team back on training days. Ricardo Pinto/SailGP

“People have this impression that because there’s data, the computer decides for you,” Presti says. “It’s totally different. The feeling is super important—it helps you look at the correct information, and this information helps you convince the [team] that this is the thing to look at. This is not a human reduction.”

Presti’s philosophy of mining performance gemstones wasn’t lost on Slingsby and the Australia SailGP Team. “For sure, we look at the performance report each day,” Slingsby says, “but we go to the data after we see something on the water.”

He explains that on his team, everyone is responsible for different areas. “I’m often looking at rudder lift and steering angles and turn rates and maneuvers,” he says, adding that the jib trimmers, for example, typically look at lead positions and sheeting angles, while the flight controller looks at ride-height and stability numbers. “We all do this in our personal time and come back with conclusions on how we can improve.”

Each team might tackle its data management differently, but parallels remain.

“Jimmy and I are pretty similar in that we’re both confidence sailors,” Slingsby says. “When Jimmy’s confident, he does amazing things, and when he’s down on confidence, I think—like myself—we can struggle a little bit.” 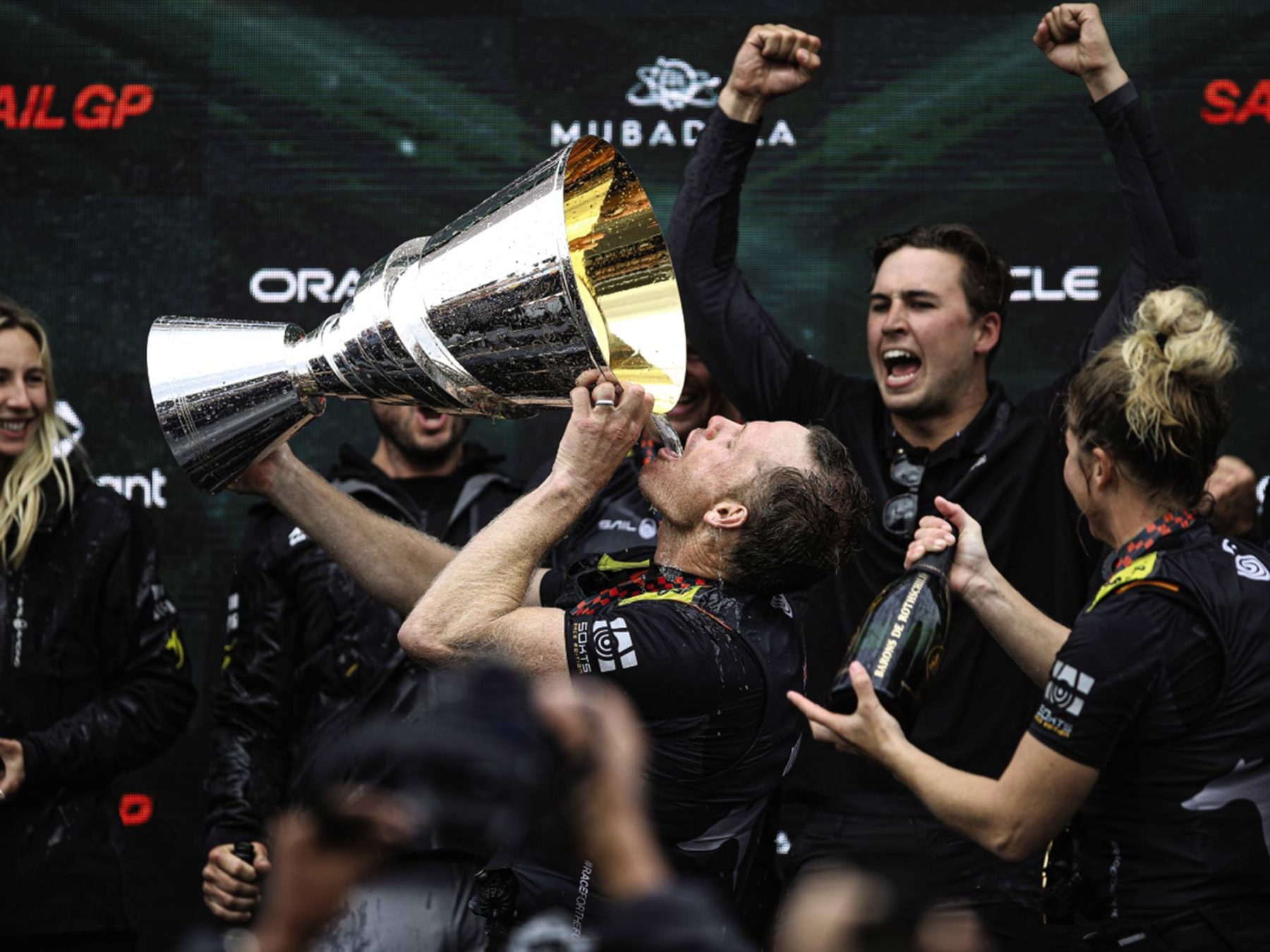 The Aussies were promptly on form and sailed their way to the Champagne lounge and the prize money. Katelyn Mulcahy/SailGP

While it’s always interesting to pit two confidence sailors against each other in a match race, Slingsby is clear that the goal in the Grand Final is to beat two teams, not just one.

“The strategy is to be the odd boat out that avoids the fight,” Slingsby says. He describes Spithill and his squad as a team that’s exceptionally good at minimizing mistakes and chipping away at small gains, while Outteridge’s team is less predictable. “Nathan is more of a high-risk sailor and flamboyant,” Slingsby says. “He can do things that no one else can do on the water, but he might make a few more errors.”

Yet confidence can be an unreliable ally. Hours after our interview in San Francisco, the Australians capsize during practice, wrecking their wingsail, damaging platform fairings, soaking their electronics, and costing valuable training time ahead of the weekend’s fleet racing. 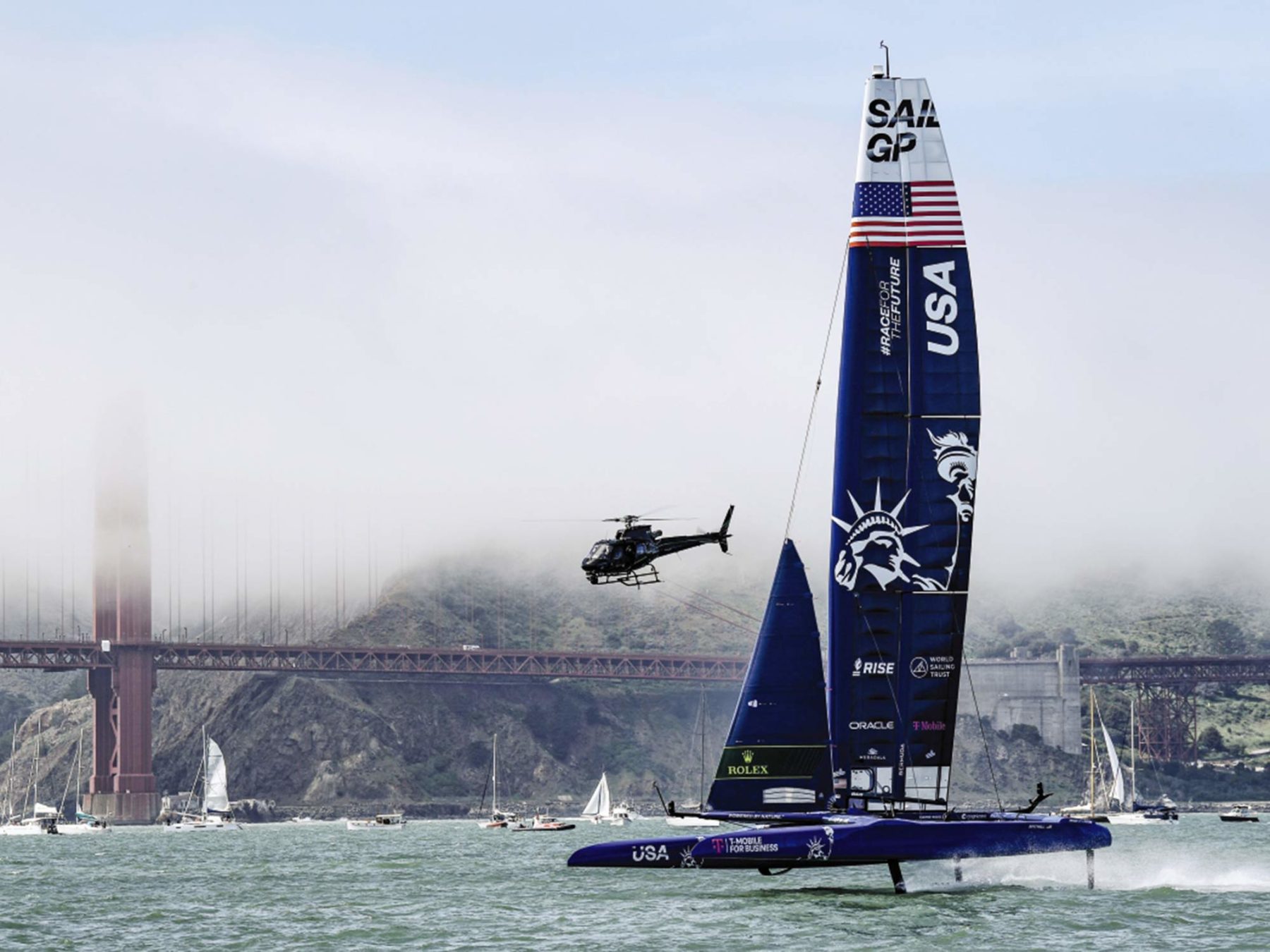 Spithill’s unpredictable shocker arrives in the fourth fleet race, when young and inexperienced helmsman Jordi Xammar—in his debut as the Spain SailGP Team’s driver—loses control during a windy leeward mark rounding, crashes into the American boat, and nearly knocks Spithill and company out of the regatta—just the thing for a confidence sailor foiling into a three-way boxing ring.

Playing cool as usual in a pre-Grand Final interview, Spithill says: “You need to be comfortable being uncomfortable. The only thing we’re trying to do is win. Second isn’t a good result.”

He’s not alone in this analysis.

“The main thing is that when you go around the first mark, [you want] to have options—you want to go straight or jibe,” Outteridge says. “If you’re overlapped with the lead boat but can’t jibe, it’s quite compromising. The third guy will probably jibe off and get the split.”

Outteridge is focusing on the first mark for good reason: Statistically speaking, the first boat around it has a strong chance of winning.

Fast-forward to the winner-takes-all final race. Spithill and the United States SailGP Team round the first mark in pole position in a breeze that’s oddly flowing from the south—a seldom-seen direction on San Francisco’s normally sea-breeze-dominated racecourse. The American team falls off its foils, handing the Australians the lead and giving fans the kind of leaderboard change that keeps them glued to the livestream.

That’s when spotters identify a whale in the racecourse. SailGP rules stipulate that racing shall halt for charismatic megafauna, so the race is abandoned.

The shiniest stone on display was that most ephemeral quality of competition.

The race committee then reconfigures the racecourse to suit the weakening conditions. The race broadcast window is closing, the whale swims off, and tension rebuilds as the game becomes a contest of first to foil.

At the start, the Australian’s green-and-black F50—dubbed the Flying Roo—is first to fly, and it’s game over as Slingsby rounds the first mark in command while Spithill and Outteridge are stuck to the water.

An 800-meter lead is hardly common play in one-design racing, but the Aussies enjoy this handsome positioning until the wind dwindles near the third mark and the boat’s hulls find the brine. The Americans and Japanese make short work of this last-gasp opportunity before finding the same soft stuff, but it’s too late: The Aussies hook into the stronger breeze first and reclaim flight. Precious little sand falls through the hourglass before the first celebratory cheers erupt aboard the Flying Roo.

“In the end, it came down to my call,” Slingsby says at the post-race press conference when asked why he and his team pushed hard in San Francisco’s final fleet races. “I said to the guys, ‘Look, I need to be at 100 percent in the lead-up races. I can’t go zero to 100; I can’t go from having fifth-, sixth-, ­seventh-place [finishes] and then expect to turn it on for the next one. I need to sail at a high level the whole way through.”

Proof positive that even amid SailGP’s clouds of data, the shiniest stone on display on San Francisco Bay was that oldest and most ephemeral quality of competition. The ­ultimate winner was supremely confident, and it’s as ­simple as that.