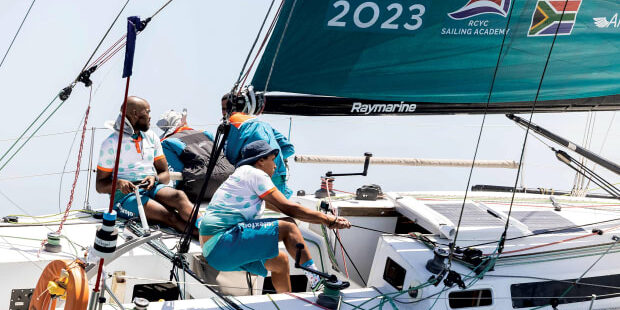 The lonely southern latitudes will be uncharacteristically busy this season, between the Ocean Race’s mammoth Cape Town-to-Itajai leg, the final stretch of the Golden Globe’s southern trek, and a fleet that will be crossing its wake: the less well known but no less spirited Cape2Rio.

This east-to-west transatlantic fleet started in Cape Town, South Africa, on January 2, bound for Rio, Brazil. The fleet will filter in over the next two to four weeks, with the MOCRA class of just two catamarans—Nohri, an American Balance 526, and the Bazilian-flagged Outremer 51 Aventureiro—getting out ahead early.

First run in 1971, the Cape2Rio is an important stepping-stone race, with many development crews participating to bring younger sailors into the world of ocean racing. One such team is aboard the Italian Swan 65 Translated 9, which was favored to podium in the IRC class at press time—early January. Co-skippered by the boat’s owner, Marco Trombetti, and ocean racer Vittorio Malingri (with Malingri’s son, Nico, as first mate), the campaign received over 1,000 amateur applicants to join the crew. The result is a diverse multinational crew of men and women ranging in age and ability.

“There is no better challenge for a crew with grand ambitions than testing ourselves in the legendary Cape2Rio Race,” says Trombetti. “Measuring our abilities in a great regatta like this one will help us see where in our preparation we are, what our limits are, and, crucially, how to push ourselves even further.”

After the Cape2Rio, the team has eyes set on the 2023 Ocean Globe Race, providing a direct pipeline for the amateur crew to long-distance racing. (The tech-limited Ocean Globe Race kicking off later this year marks the 50th anniversary of its inspiration—the first Whitbread Round the World Race.) The team is holding one spot on the circumnavigation open for the right candidate, so if you think you’re up for the task, apply at translated.com/9.

Another boat to keep an eye on is the South African-flagged Lavranos 36 Alexforbes ArchAngel, skippered by Sibusiso Sizatu. The team has the youngest average age in the race, with Sizatu the most senior at just 30 years old.

“It’s the day we have all been waiting for—the most exciting moment of my life,” says Sizatu, an instructor at the Royal Cape Yacht Club Sailing Academy who is sailing with students from the academy.

Born in a small village too far from any metropolitan area to even be issued a birth certificate, Sizatu has followed an unlikely path to becoming an ocean racing skipper. He began sailing through a program organized by South African Olympic sailor Ian Ainsle to get kids from rural areas out on the water.

“He deserves much credit in what we’re doing here. It was his dream that one day we would be doing what we are today—that we would make it in the sport of sailing,” says Sizatu of his mentor and role model. Sizatu went on to race in the Junior World and European championships before turning to coaching at the Royal Cape Yacht Club Sailing Academy. When Alex Forbes offered sponsorship for the Cape2Rio, he jumped to put together a team based on performance and dedication at the academy. Only time will tell what’s next for this crew, but it would not be a surprise to see any of these talented young sailors on the start line of future ocean races.

For a full recap of the race and results, visit cape2riorace.com.