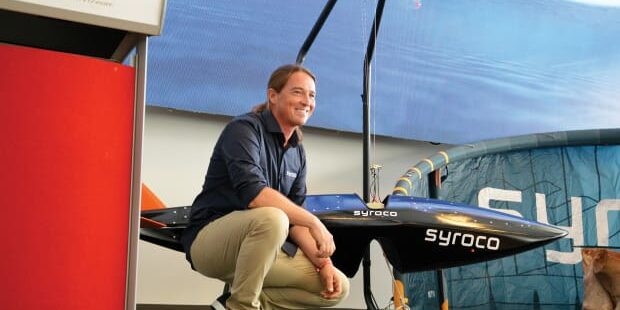 French kiteboarder Alex Caizergues loves going fast. He is a four-time Kite Speed World Champion and holds the Kitespeed World Record at 57.94 knots. Recently, however, he’s set his sights on a different form of locomotion, leading the innovation lab Syroco’s effort to break the sailing speed record with a new kind of craft: a hyper-aerodynamic vessel that borrows design ideas from both sailing and kiteboarding, with an anchoring T-foil and a kite sail balancing each other out to keep the boat hovering well above the water with as little friction as possible.

It’s still early days, but the team projects that its craft, named Moonshot #1, will reach upwards of 80 knots. If achievable, this will easily beat the current record of 65.45 knots over 500 meters set by Vestas Sailrocket 2 in 2012 on Namibia’s Walvis Bay. In early 2022, construction on Moonshot #1 will begin, using knowledge gained from a radio-controlled test prototype built and sailed in 2021.

Though at the moment they’re focusing on the speed record, there has also been talk of what this technology and design could eventually mean for lowering the environmental impacts of maritime transportation. For more information, visit syro.co/en/speed-record.