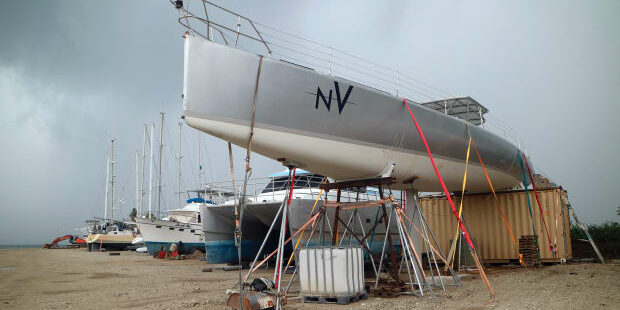 Having set ourselves the task of transforming our recently purchased Open 66 ex-Vendée Globe racer, NV, into a performance family cruiser, my partner, Timo, and I found ourselves (extremely) high and dry as cyclone season approached.

The favorite cyclone strategy in Fiji is to sit your boat in a cyclone pit in Vuda Marina. This is a hole dug in the ground in which the keel and rudder fits, with the hull sitting on tires at ground level. Unfortunately for us, digging a pit deep enough for our 14-foot keel was impossible, as the bottom of the pit would end up below sea level, which in turn would cause it to collapse. Our draft also prevents us from being able to tie up among the mangroves in one of the nearby rivers—another popular option.

After months of sleepless nights, though, I now sit writing this account of the solution to the problem that we came up with from within a 20ft shipping container, on top of which our boat now lies tied down.

The container proved to be the key to our strategy to stay safe this cyclone season, since having previously taken the rudder out of the boat to replace part of the bearing, we were able to put NV’s stern directly over it. Positioning the boat at a right angle to the container allowed us to provide the boat with that much more stability, thereby decreasing the chance of movement in any kind of heavy weather.

To sit the boat on top of the container, we built a cradle, which we placed under one of the main bulkheads at the stern. Careful consideration went into the positioning of the cradle, so as not to bend the container’s roof. You might think with a displacement of less than 22,000lb we had nothing to worry about since containers as heavy as 30 tons are often stacked on top of one another. However, containers are designed so that the bulk of the load is transmitted through their corner posts only, as these are the only parts where the stacked containers come in contact with one another. In our case, we were planning for the cradle to span the entire length of the container, which meant we also needed to be sure it wouldn’t cause the container’s relatively flimsy corrugated steel roof to collapse.

To ensure this wouldn’t happen, we ran a plank along one of the long edges of our container from one corner post to another, so that it would serve as a kind of foundation for the cradle. We also laid strips of wood in the troughs of the corrugated sheet metal to level out the peaks and valleys, so to speak. This way, if and when the plank supporting the cradle ever flexes, the force will be evenly spread out across the entire surface. Finally, we also reinforced the container from within by placing a sturdy metal pillar in the middle of the wall supporting the cradle.

Meanwhile, up at NV’s bow we built yet another cradle, which we sat on top of a strong metal framework positioned under yet another one of NV’s bulkheads.

With NV now secure on her two cradles, we set the about business of filling the container with our heaviest gear, including sails, anchors, anchor rode, etc. We also buried a set of concrete blocks to either side of NV, each of which has a chain partially welded inside to which we were able to attach a number of cyclone straps to hold both NV and the container down in the event of severe weather.

In the end, we are both very happy with this setup, which we feel to be very strong. In addition to helping us secure NV, the container also serves as a kind of workshop and storage area during this wet and windy time of year, making it a huge help with our ongoing refit. We also plan to use it to ship some of our sails, the two cradles we’ve now built and various other bits of gear so we can keep NV nice and light as a race boat should be when it comes time for us to set again.

Ed Note: For the latest on Joanna, Timo and their infant son, Nemo, visit sailingnv.com, or go to youtube.com/c/sailingnv