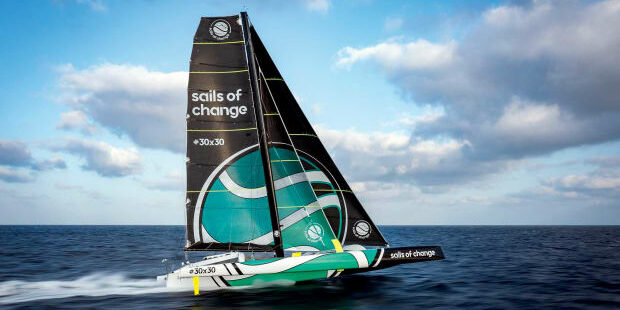 In the 11 years since Spindrift Racing made its debut, the pro sailing team has made a big splash, and the upcoming season is expected to be no different. Spindrift co-owners Dona Bertarelli and Yann Guichard recently unveiled their plans for 2022, which included the appointment of a new executive director, Sébastien Duclos, and the team’s return to the TF35 circuit. The team will also attempt a number of offshore records—including the Jules Verne trophy and 24-hour record—aboard the maxi-trimaran Sails of Change (formerly Spindrift 2 and before that Banque Populaire V).

Established in 2011, Spindrift is based in Brittany, in northwestern France, with Sails of Change as its flagship and its T-Foiler 35—TF35 for short—being the most recent addition to its racing stable.

The TF35 is a foiling catamaran that has a six-person crew and features an automated flight control system, meant to make the boat more speed-efficient while foiling. After an inaugural season racing on the TF35 circuit in 2021, the Spindrift team is taking a second shot at the six-event circuit this year, starting in Switzerland on April 30. They will compete against seven other teams, including the Alinghi Red Bull Racing crew.

“In 2021, we finished the first season in 3rd place with the freshly delivered boats. We’re extremely proud to have been able to compete so quickly with a newly formed team,” Guichard says. “We’re keen to repeat this performance throughout this year’s championship and see if we can better our 2021 results.”

At the same time as the team is competing on TF35 circuit, Spindrift’s maxi-trimaran will be on standby, waiting for a favorable weather window to attempt the Jules Verne trophy. At press time, the plan was to watch for a window from mid-April to mid-May and then from the end of June and all of August to attempt a number of records. This might seem like a lot of time to set aside, until you remember that the team was on standby for months last autumn, waiting for a window that never materialized. The Discovery Route, the 24-hour record, the Round Britain and Ireland, Cowes-Dinard and Plymouth-Rochelle are also all on the table for a try, given the proper weather.

Guichard, who has a busy season ahead of him as part of the crews for both boats, says, “This variety in sailing, on two very different boats with a range of objectives, really appeals to us. All the sailors are looking forward to competing.” The boats are currently being prepared in Saint Philibert, in south-west Brittany, for the upcoming season.

In addition to sailing, the team is spearheading the Sails of Change ocean conservation program (for which the trimaran is named) which works to protect the world’s oceans through sailing and education. As part this effort, Bertarelli spoke at some length at The One Ocean Summit in early February about the program’s “30 by 30” initiative, which hopes to have 30 percent of the planet protected by 2030.

At the conference, where Bertarelli was a member of a six-person panel organized by French president Emmanuel Macron, she said, “We’re already championing this 30 by 30 message on both our boats to raise wider public awareness, and we will continue our work to raise awareness among the younger generations with our Spindrift for Schools program. We very much hope that these complementary activities can contribute to protecting our planet.” Spindrift for Schools was established in 2014 to promote environmental awareness among school-aged kids. For the latest on Spindirift’s racing and environmental programs, visit spindrift-racing.com.