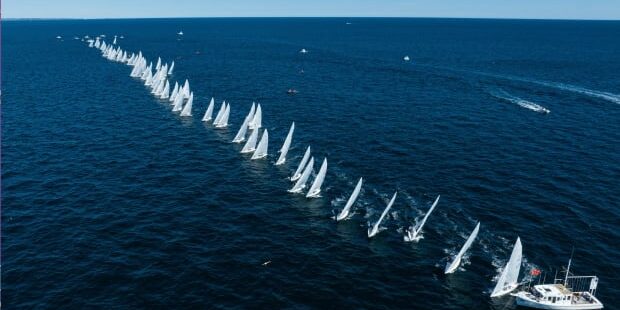 The 2022 Star Worlds featured six days of intense racing where the final and deciding gold medal win went to Diego Negri and Sergio Lambertenghi of Italy.

During some of the toughest sailing conditions in the race’s recent history, sailors and race management overcame daily challenges ranging from light air and very choppy seas to strong, gusty, and cold winds. The epic battle took place in Marblehead waters and featured 85 boats from 13 countries, many who were former World Champions, Olympians and among the best sailors in the world today.

For the Italians, a third-place finish on the final day sealed their win. “It was really a tough Championship,” said Negri who defended his 2021 Worlds title and won the 100th-anniversary championship. “We played this way from the beginning… stay calm and we are going to win the Championship. It was great fun, with a lot of intensity. I thank Sergio who was with me the last few years, always supporting me. He has been great, today especially, so I am very, very happy.”

The final race was on Saturday and featured a large spectator fleet, no surprise given a number of Marblehead sailors, including Jud Smith and Tomas Hornos who placed ninth, on the course. The battle of the Star worlds came down to the final race with Mateusz Kusznierewicz (POL) and Bruno Prada (USA) leading to the first mark, chased by Negri/Lambertenghi, and Croatia’s Tonci Stipanovic and Tudor Bilic, who had their work cut out to close the points needed for a podium finish.

A few boats further back Paul Cayard (USA) and Frithjof Kleen (GER) were gunning for the bronze, and with their podium rivals, Eric Doyle and Payson Infelise (USA), struggling in 31st, their quest was secure as they crossed the line in eighth.

Commenting on the challenge of racing in Marblehead, Cayard, said, “I was very happy to get third, but at this level, it is very hard to be in the position to win on the last day, but we were there, as was USA sailor Eric Doyle. Being in that position, we started three-quarters of the way down the line and went left and unfortunately, the wind went right. Diego (the winner) relies a lot on his boat speed and always stays in the middle of the course and this has paid off for him. He sailed a great regatta. We have been on the wrong side of the first beat a little too much. We have made amazing comebacks, but it is hard to beat guys like Diego and Sergio if you are on the wrong side of the first beat all the time.”

This is the second time Cayard has been to the Star Worlds in Marblehead, having also competed here in 1994. “It is great being here in Marblehead and all the yacht clubs have done a wonderful job. We are celebrating a good year and a great season of racing ending with this event here.” This sentiment was shared by Kleen who noted that, “It has been special to me sailing with a legend like Paul Cayard. This is an epic event and a very challenging series. We really enjoyed being here in Marblehead.

Today’s bronze medal represents the seventh time Cayard has stood on the Star Worlds podium, and it was thirty-four years ago in 1988 that he won gold with Steve Erickson. More recent glory days for Kleen saw him secure top spot last year with Diego Negri, and previously in 2014 with Robert Stanjek.

The 100th anniversary of the Star World championships meant that history was very much a part of the week-long event that was open to all Star sailors with no qualifying event.

The Star boat is one of the most technical small boats on the water to this day, which includes its two back stays, length, maneuverability and was an Olympic boat for over 80 years and today many former Olympians, America’s Cup and world-class sailors still fill its ranks. Yet, it remains a fleet where camaraderie and fellowship off the water, multi-generations competing and a special bond to the boat and the class keep these sailors together.

“Over the past 100 years, the role the Star Class has played in international sailing cannot be overstated. The Star has led with innovations, not least modernizing itself, while retaining its distinctive one-design hull shape. The International Star Class Yacht Racing Association is beyond proud to be celebrating this historic achievement, the first by any international class,” commented Tom Londrigan, Star Class President. “Beloved by all ages, the youngest sailor competing here is Vincent Schrader (GER), 23 years old, with the oldest, John Chiarella (USA) at 85—all thrilled to be competing. Thank you to our hosts the Eastern Yacht Club, to the Star Class sailors and volunteers.”