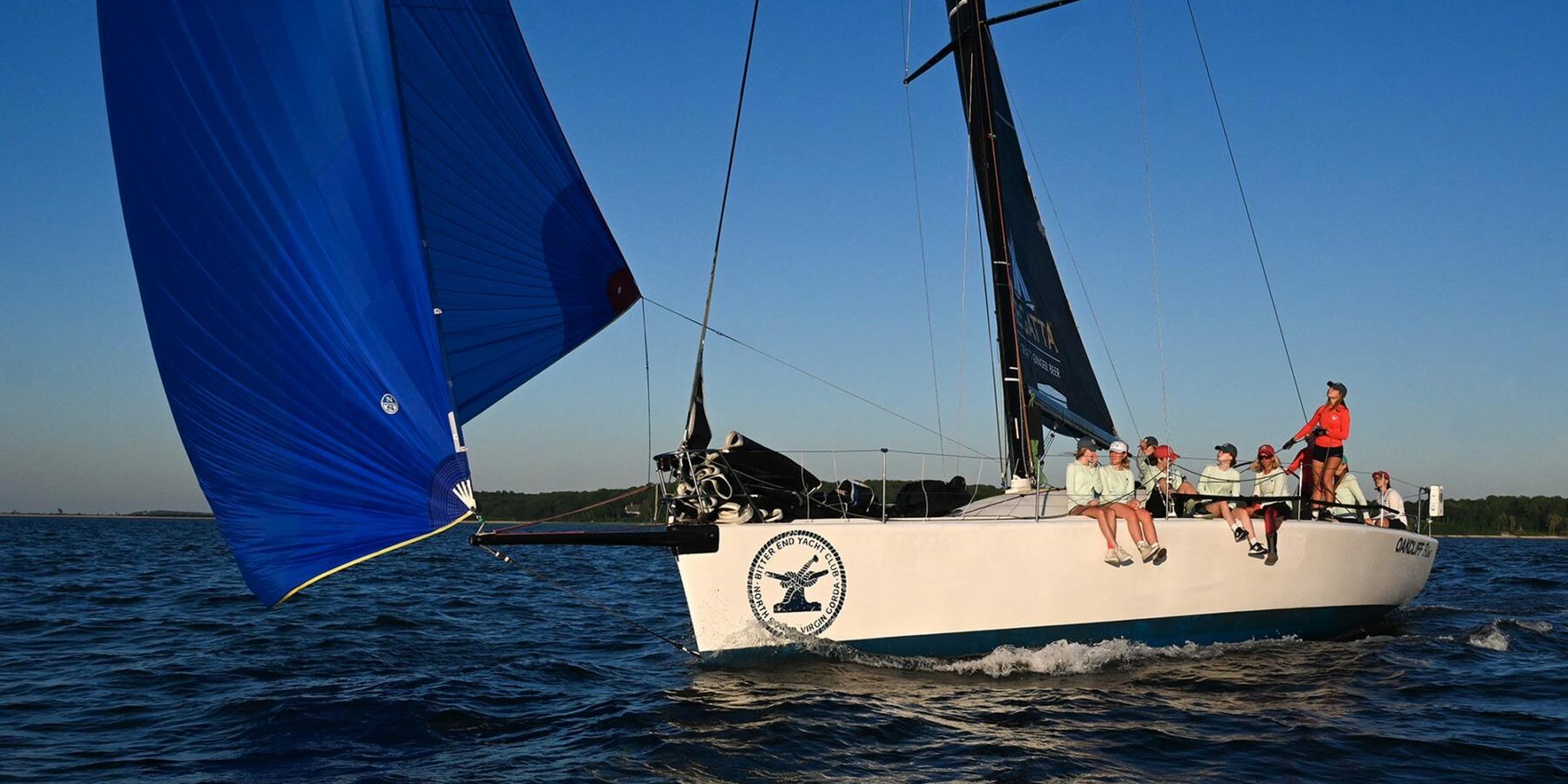 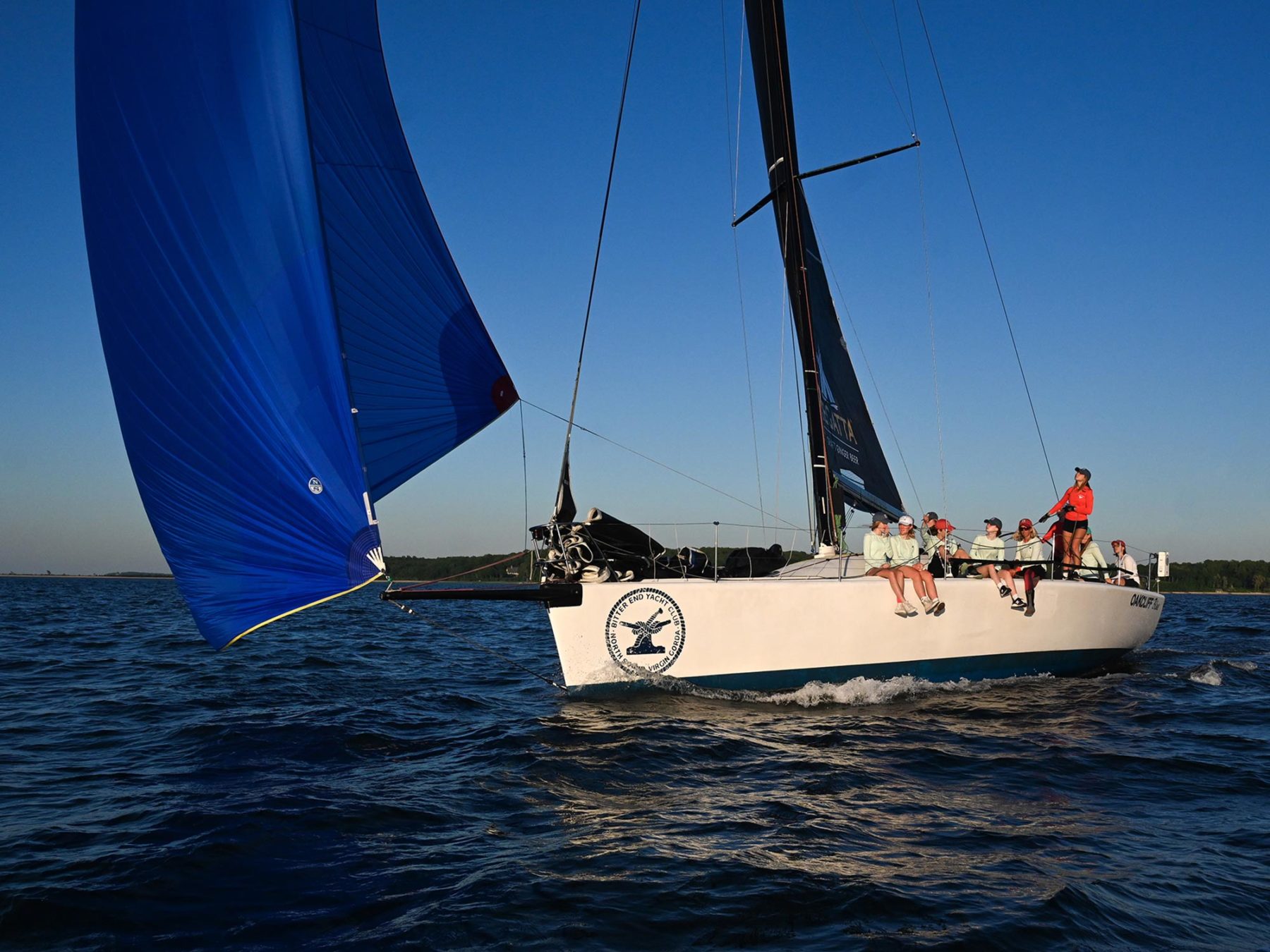 The idea to compete in the Bermuda Race started off as kind of a joke, something that was seemingly impossible. After all, as some of the girls pointed out, it’s a huge race; the word “crazy” was used. But the seed had been planted.

The young sailors, made up largely of teenagers, had been racing with the Collegiate Offshore Sailing Circuit in summer 2021. Their final race, the Ida Lewis, was canceled thanks to Hurricane Henri, so they were figuring out what to do next over pizza when the following summer’s Newport Bermuda was thrown into the mix.

“It was [our coach] Richard Feeny who ended up saying, ‘That’s not completely out there,’ and it put this idea in our heads that we could do it,” team member Milla Clarke says. “And we did it!” And that’s how the country’s oldest organized ocean race got its first-ever all-female youth team at its 52nd edition this past June. 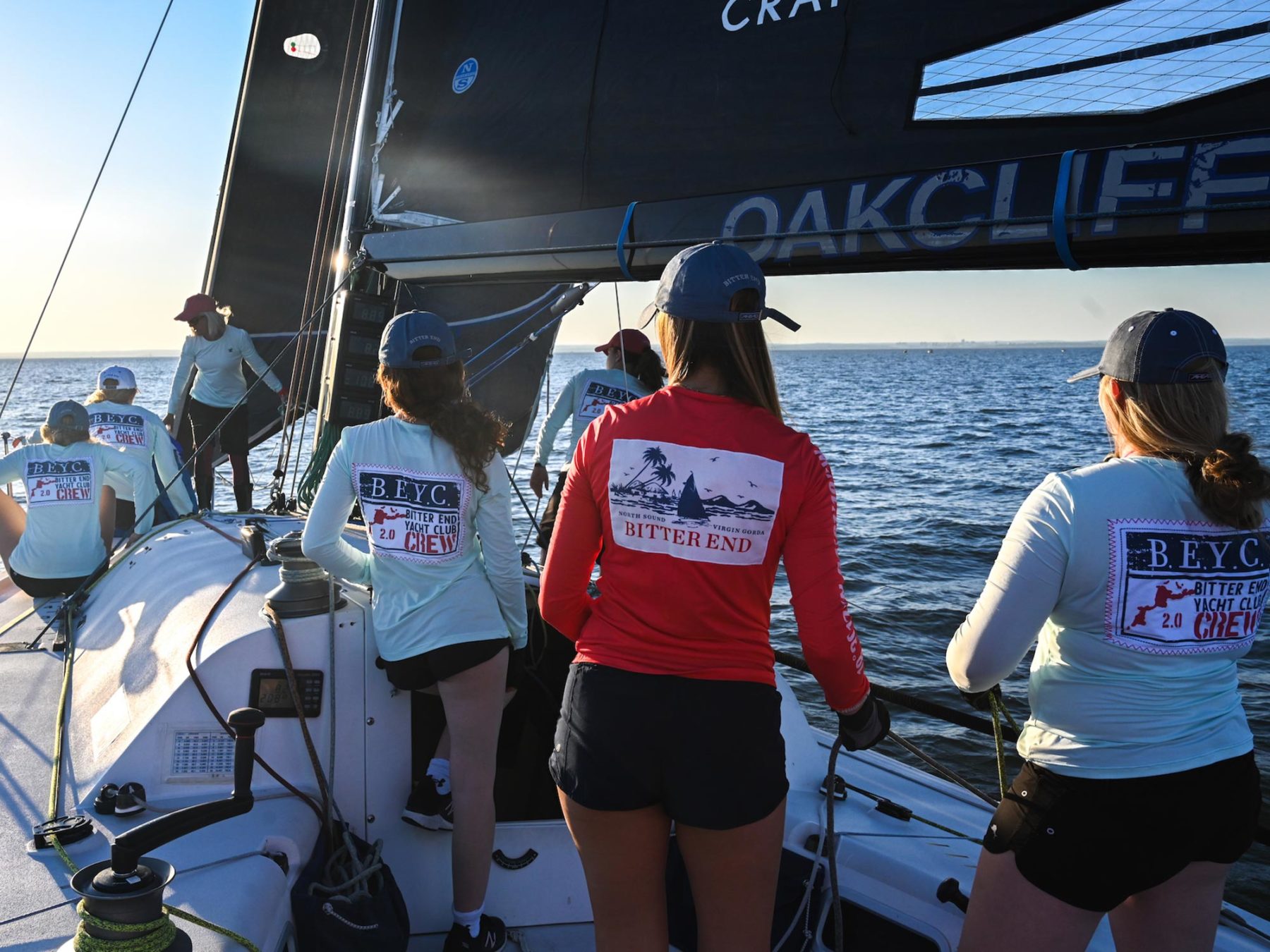 The team is made up of seven students from the Lincoln School in Providence, Rhode Island, ages 16 to 18. Bitter End Yacht Club

The team is made up of seven students from the Lincoln School in Providence, Rhode Island, ages 16 to 18—Milla Clarke, Sophia Comiskey, Callie Dawson, Gigi Fischer, Elizabeth Gardner, Phoebe Lee and Olivia Vincent—plus Sarah Wilme, age 20, a boatbuilding student at IYRS in Newport, and four female coaches. They not only “did” the race, but they did very well, finishing 27th overall out of the 187-strong fleet, and placing eighth in the Gibbs Hill Lighthouse division of 18, which comprised mostly professional crews.

Bitter End Yacht Club became their title sponsor when its President, Kerri Quinn Jaffe, was reading about them in Newport This Week over her morning coffee and realized that one of the girls had gone to preschool with her daughter, which really brought it home for her exactly how young they were.

“That had me daydreaming about being a mother of one of these brave youth sailors, and how I might feel if my daughter came home and told me she wanted to compete in the 635-mile offshore race, considered one of the more challenging offshore races in the North Atlantic,” Jaffe says. “From there I started thinking about the face of sailing and our industry, and how Bitter End has always been a training ground for youth sailing, and the importance of us continuing that tradition as we evolve our next chapter.” 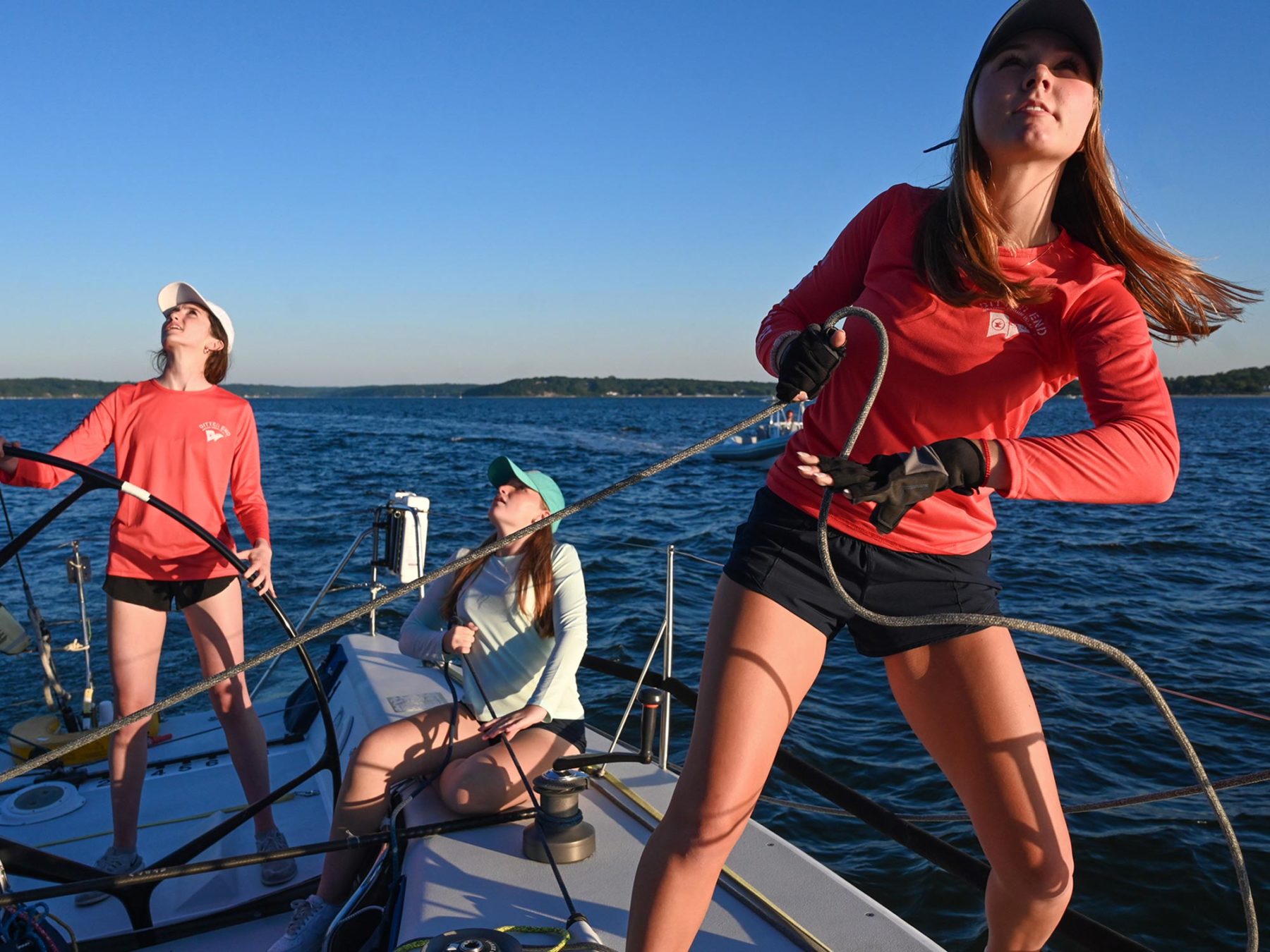 In the tough moments, such as being roused from their bunks, faced with wet leggings and “waterproof” socks that weren’t doing their job, their camaraderie pulled them through. Bitter End Yacht Club

The girls had been training at Oakcliff Sailing in Oyster Bay, New York, which is run by Dawn Riley, a three-time America’s Cup sailor and also a Bitter End ambassador, representing its Bitter End Provisions clothing line. “Dawn and I talked about how this was a moment in time not only for these young sailors, but also for women in sailing and for youth in sailing. As we look to the future, it is critical that we develop more youth and more diversity in the sport, and we felt this team stood for something important,” Jaffe says.

In the months leading up to the race, the girls lived and trained together at Oakcliff Sailing every weekend, leaving straight after school on Thursday, sailing Friday, Saturday and Sunday, and returning to Rhode Island on Sunday night in time for school Monday morning. They trained and raced in the Farr 40 that they would use for the Bermuda race under head coach Libby Greenhalgh, who had been the navigator on the all-female Team SCA in the 2014-15 Volvo Ocean race. 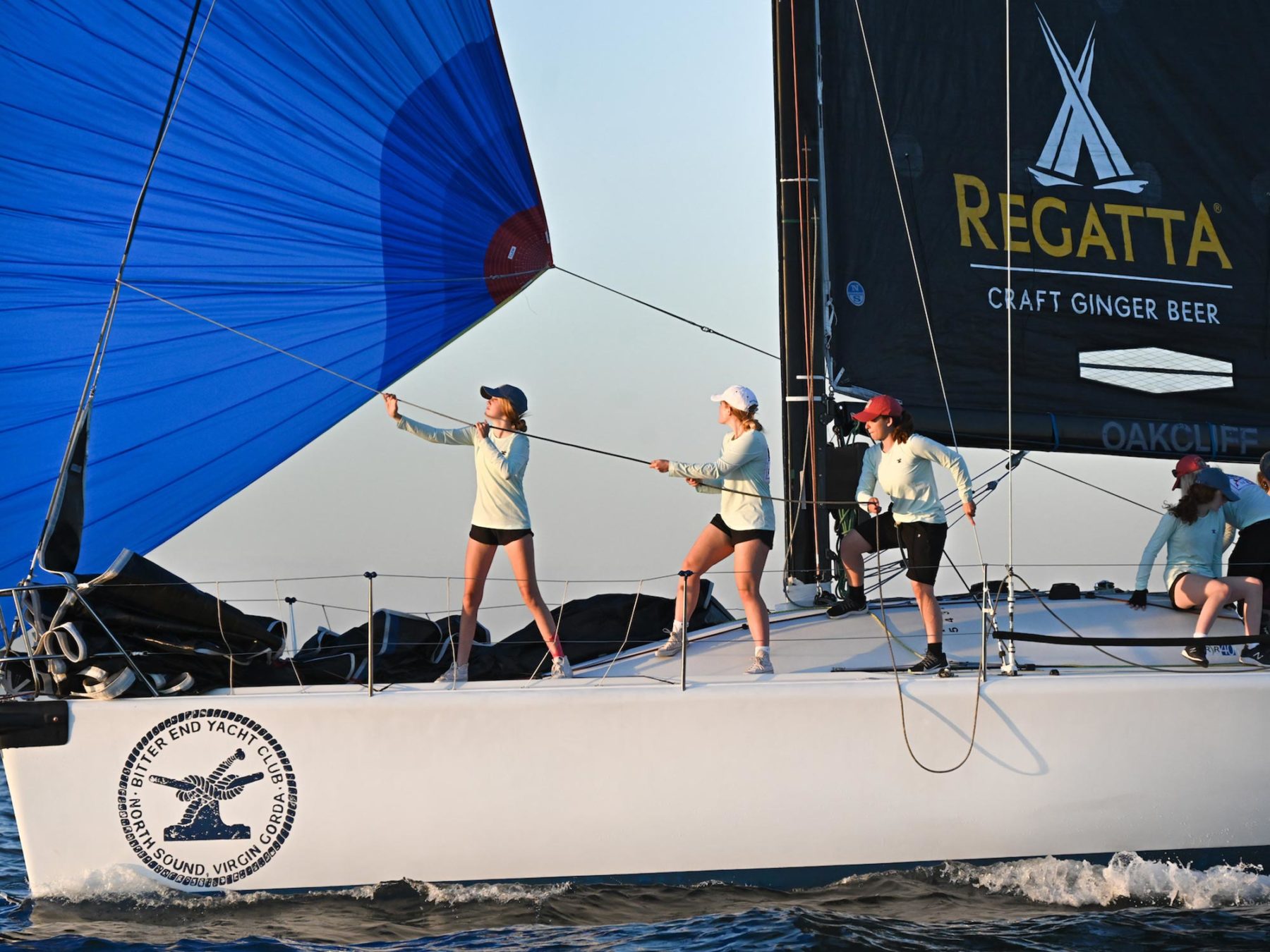 The young sailors, made up largely of teenagers, had been racing with the Collegiate Offshore Sailing Circuit in summer 2021. Bitter End Yacht Club

This intense lead-up and the fact that they had been sailing together for over a year helped them tremendously, they say. “We know each other really well, and we understand what people are going through, how to help them, and what they need in order to do well. When you have that dynamic within a team, I think it’s a lot easier to do well,” Sophia Comiskey says.

Gigi Fischer seconds that: “We have this aspect where on land, and even sailing sometimes, we have so much fun, but we also know how to come together as a team, and click into what we call ‘race mode’ and stay focused.”

They describe the mostly downwind race as fairly seamless, until the last morning, when they lost their gooseneck pin connecting the mast and boom overboard and had to jury-rig a solution out of Dyneema. “It was definitely a tense moment for our team. But we were all able to rally and come together and safely work out this problem. Other boats had encountered this as well, and they had to head back unfortunately, but we muscled through as a team and were able to finish,” Olivia Vincent says. 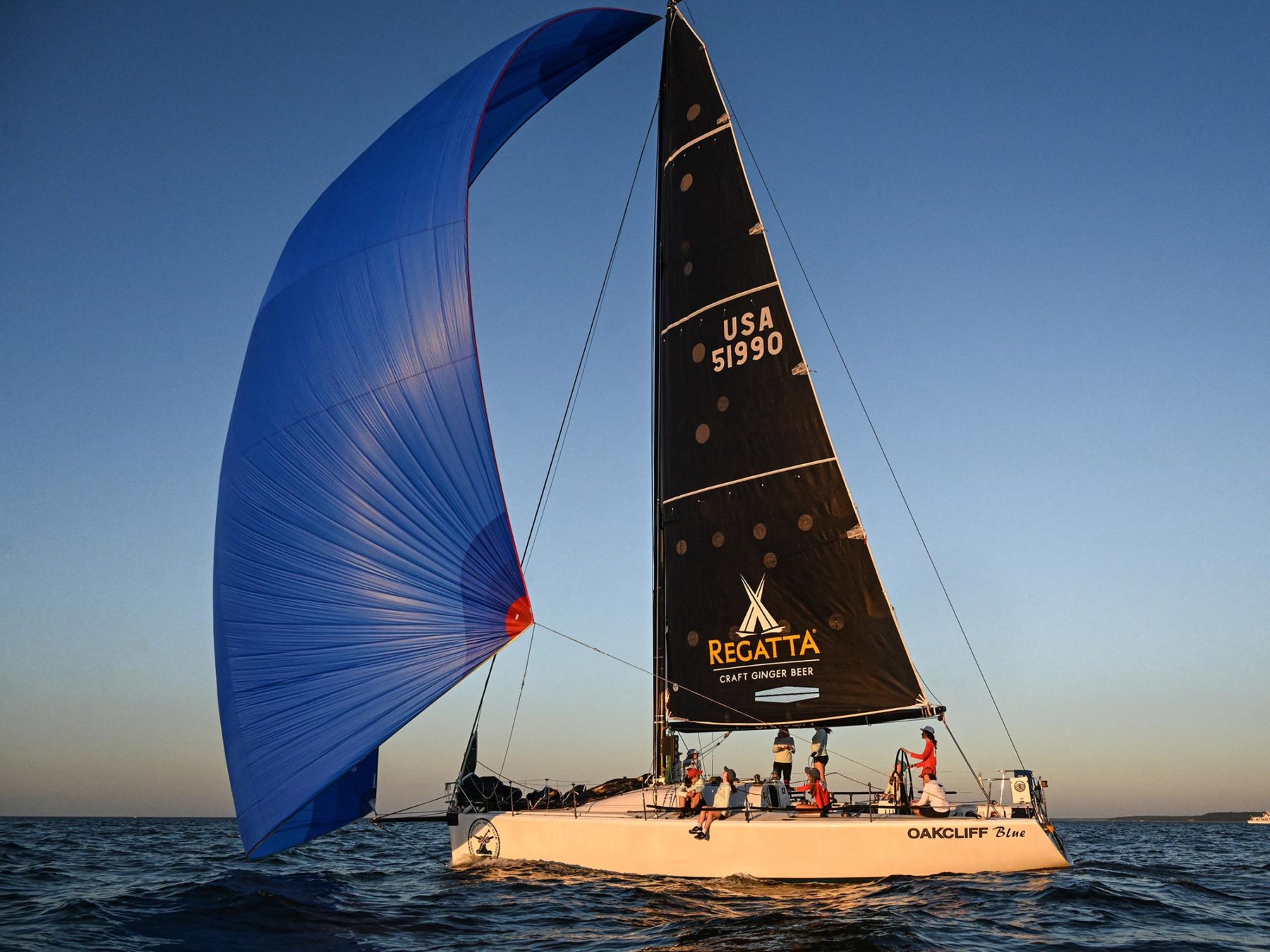 The team not only “did” the race, but they did very well, finishing 27th overall out of the 187-strong fleet. Bitter End Yacht Club

Their watch schedule was grueling, with little sleep to be had over the three-plus days it took them to reach Bermuda: four hours on deck, where they would rotate positions, two hours of standby watch, and just two hours of sleep, “which you didn’t even get most of the time because we would have either an all-hands-on-deck situation, or you weren’t able to sleep,” Fischer says.

In the tough moments, such as being roused from their bunks, faced with wet leggings and “waterproof” socks that weren’t doing their job, their camaraderie pulled them through. “My partner, Callie, would always say, ‘We can’t get out of this; let’s just get into this,’” Clarke says, and they made it fun together. They also had the mindset of “I get to be here, instead of wishing I were somewhere else,” Comiskey adds. “And I think that makes you appreciate everything you’re doing.”

In general, they played it safe with sail choices, averaging 13 knots over the course of the race, while preserving their sails. “We ended up ripping only one sail, which we were able to repair on the boat with the sail-repair kit,” Fischer says. 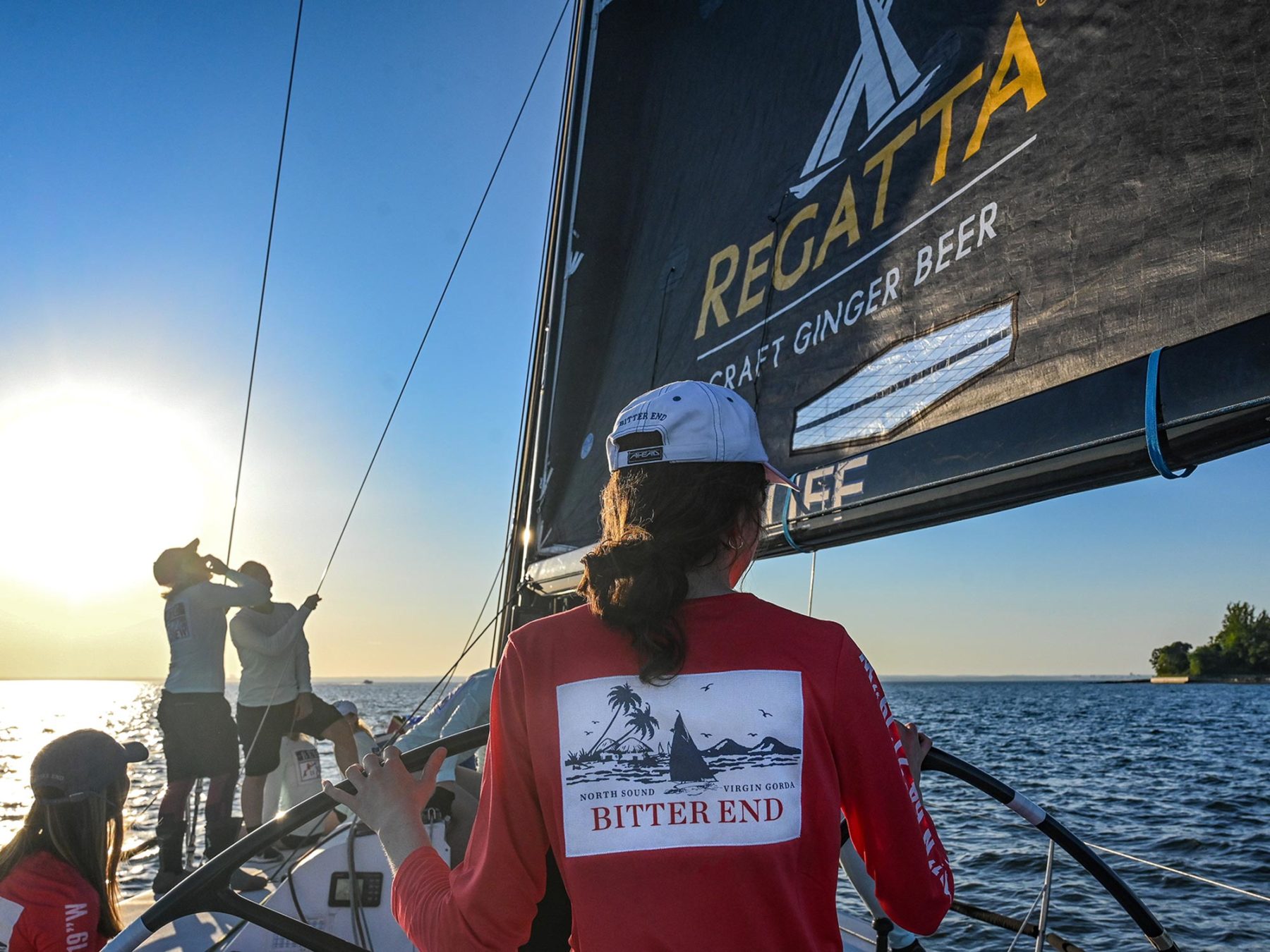 An unintended factor in their success was the fact that they had no satellite weather data, so they did not end up routing around potential systems as some other teams did. When they neared Bermuda and their phones came back to life, they were able to access the tracker app, and it came as a surprise to them how well they had done.

In contrast to their departure from Newport, where they said they had felt empowered and respected, in Bermuda they felt that they were treated differently because of their gender. They didn’t get offers to sail on better boats with more established teams as boys who hadn’t done as well as them did, but they found their own networking opportunities—in the women’s bathroom of the yacht club of all places.

“That was our favorite place,” Comiskey says. “We did some serious networking in there,” Clarke adds. “There were so few women, but the women who were there have experienced the same things as we have, and they were much older than us. They shared their wisdom and told us how they’ve made it. It was really encouraging.”

More than 30 years have passed since Dawn Riley was part of the first all-women’s team to sail around the world in the Whitbread race. “There’s still a place for all-women and all-girls teams. But it isn’t a fight; it’s a celebration,” she says. 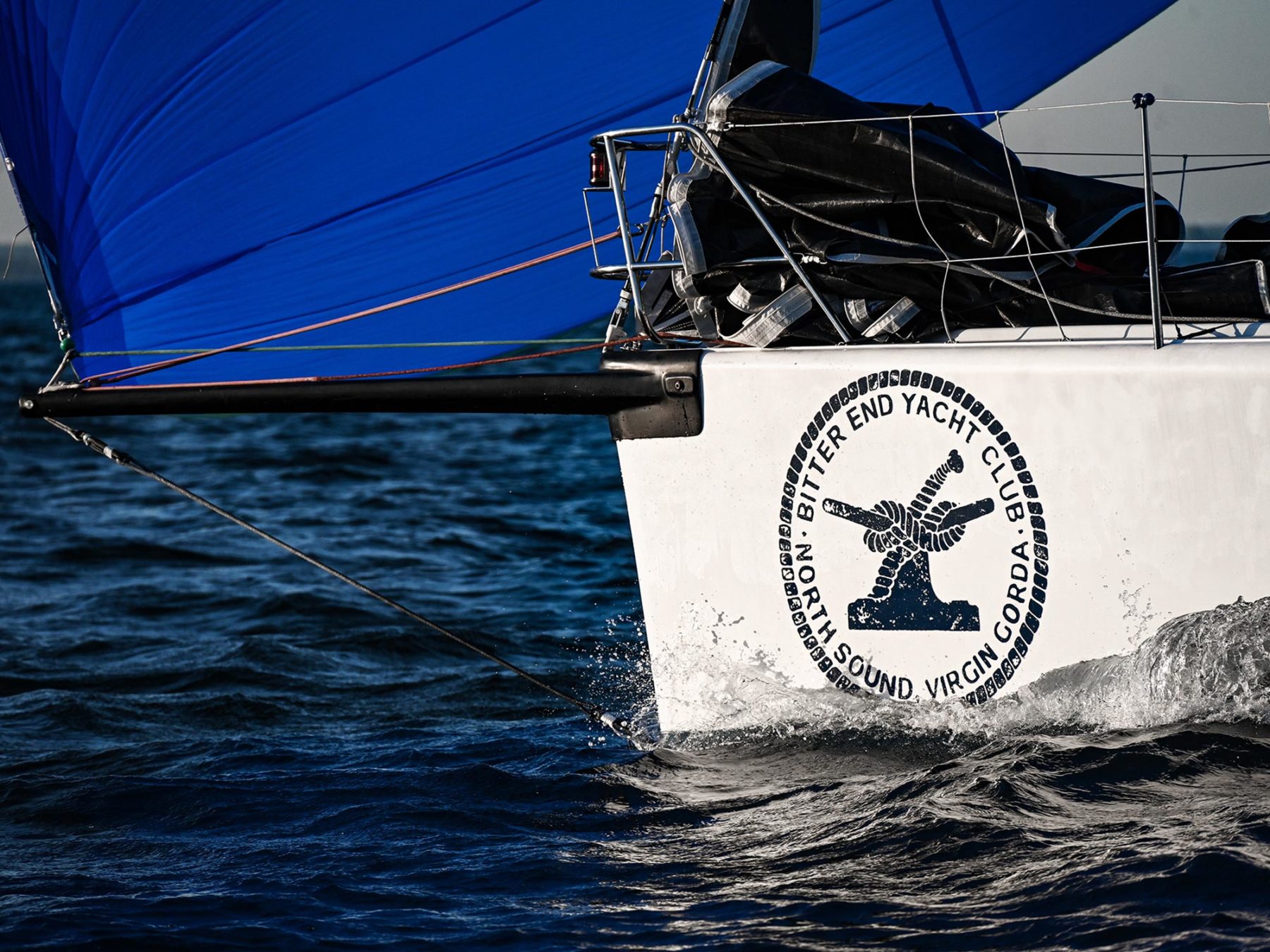 “Our mission is, ‘Get out there, get on the water, get under the water, get close to nature and the elements.’ There’s so much to learn from the adventure.” – Lauren Hokin, third generation of the family who has Bitter End since 1973. Bitter End Yacht Club

“What these young women did was an incredible adventure at sea, and we encourage and celebrate those adventures, albeit on a different scale,” says Lauren Hokin, third generation of the family who has Bitter End since 1973. “Our mission is, ‘Get out there, get on the water, get under the water, get close to nature and the elements.’ There’s so much to learn from the adventure.”