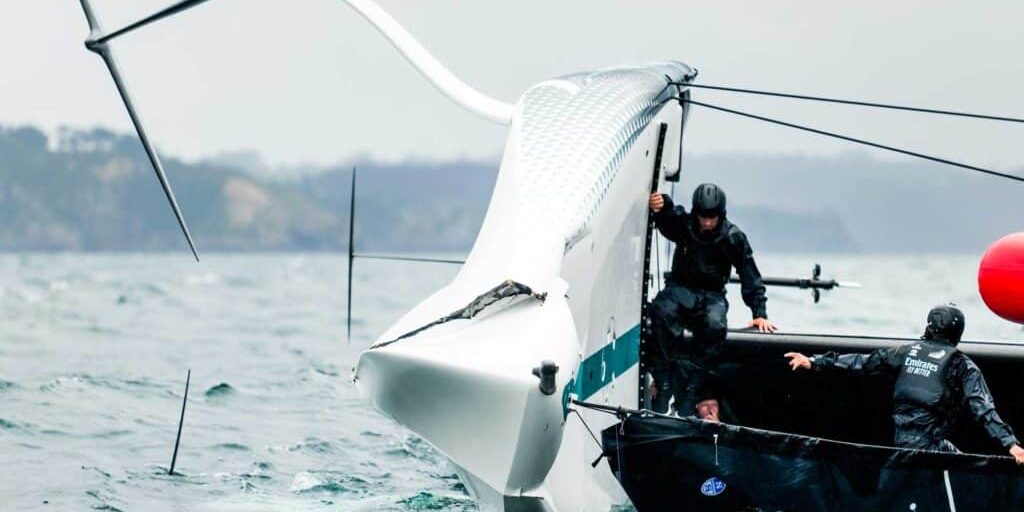 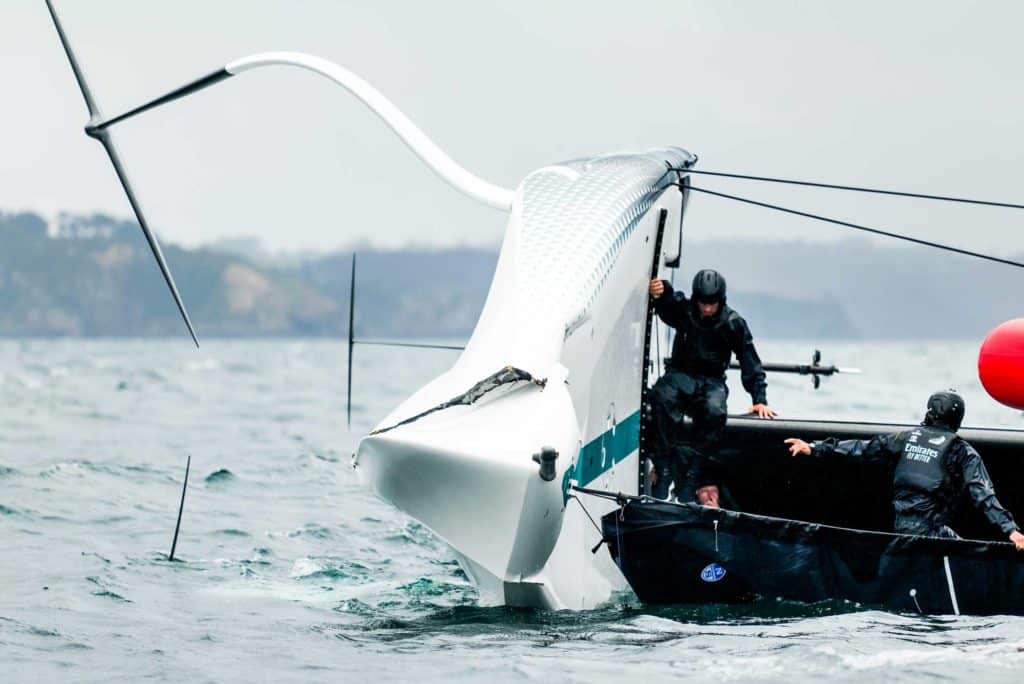 A watertight crash bulkhead prevented water ingress into the hull’s mid-section, allowing the team to methodically right the boat and prepare it for the long tow (on foils) back to the base. Adam Mustill/America’s Cup

In the America’s Cup, especially with today’s experimental and extreme foiling crafts, there is a fine line in the race for the edge, and on the waters off New Zealand earlier this week, Emirates Team New Zealand, the 37th America’s Cup Defender, suffered a serious setback to its winter testing program after severely damaging its modified AC40 one-design (which now qualifies as its development yacht and is referred to as an “LEQ12”).

It is more than a developmental hurdle the team, however, as the bow section’s structural failure that resulted from the pitch-pole and subsequent capsize will now force the design and engineering teams to address the issue before AC40s are launched by other teams in the coming months.

According to an Emirates Team Zealand statement, before sailing resumed this week the AC40 had been modified from its one-design configuration. America’s Cup recon personnel assigned to the team noted a curved anhedral foil on the port foil arm that appeared to be smaller in area than the standard one-design foil, but other than that, there were no other observed changes to the boat or rig.

According to a team statement, sailors Peter Burling, Blaire Tuke, Nathan Outteridge and Andy Maloney were sailing under manual flight control in around 15-20 knots of windspeed and large waves. “While sailing downwind at over 40 knots of boat speed, the crew onboard lost control of the ride height which caused the rudder and elevator to come out of the water. This resulted in a high-speed uncontrolled jibe and simultaneous deep nosedive followed by a capsize.” 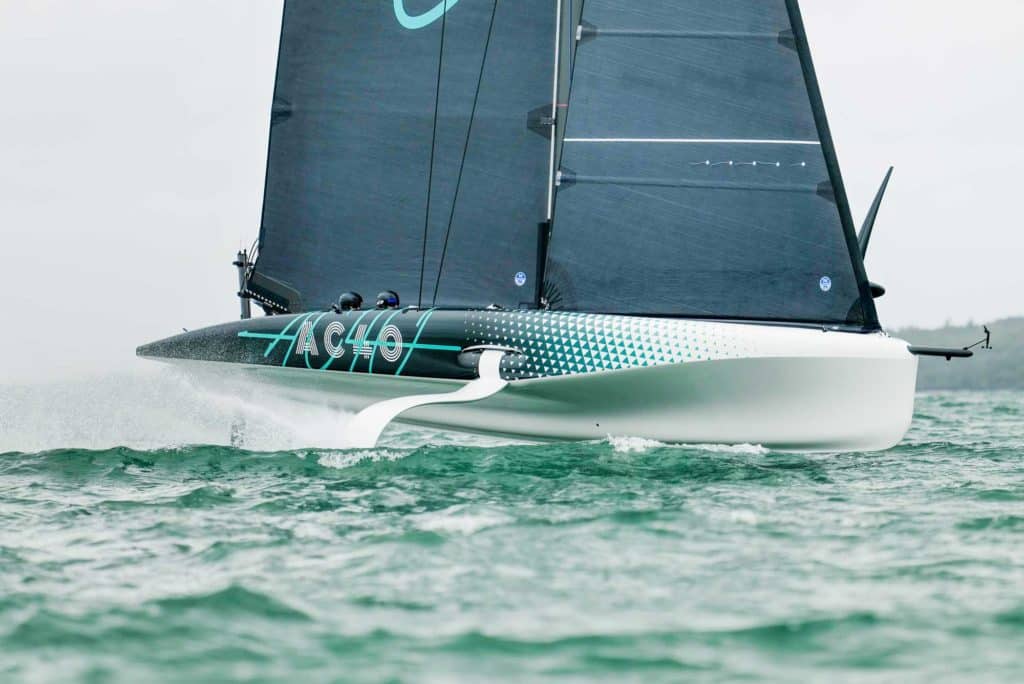 “Stuffed it pretty deep,” is how Emirates Team New Zealand CEO Grant Dalton summarized the incident. “But it happens.”

The recon team noted that two previous jibes were completed without issue, but during the pitchpole the observed windspeed had increased significantly. Videos and images following the capsize revealed that boat’s foredeck crumpled in multiple places and the bow almost sheared off forward of the forwardmost watertight crash bulkhead.

“It appears that when the boat nose-dived, which was the best we have done, the high-water pressure and side load collapsed the forward section of the deck causing the resulting bow damage,” Dalton said. “The designers are analyzing the load cases of the incident and although it might be too soon to tell, it is likely that we will have some retrofit structure necessary to our boat and throughout the AC40’s fleet. But we will understand this further in the coming days.” 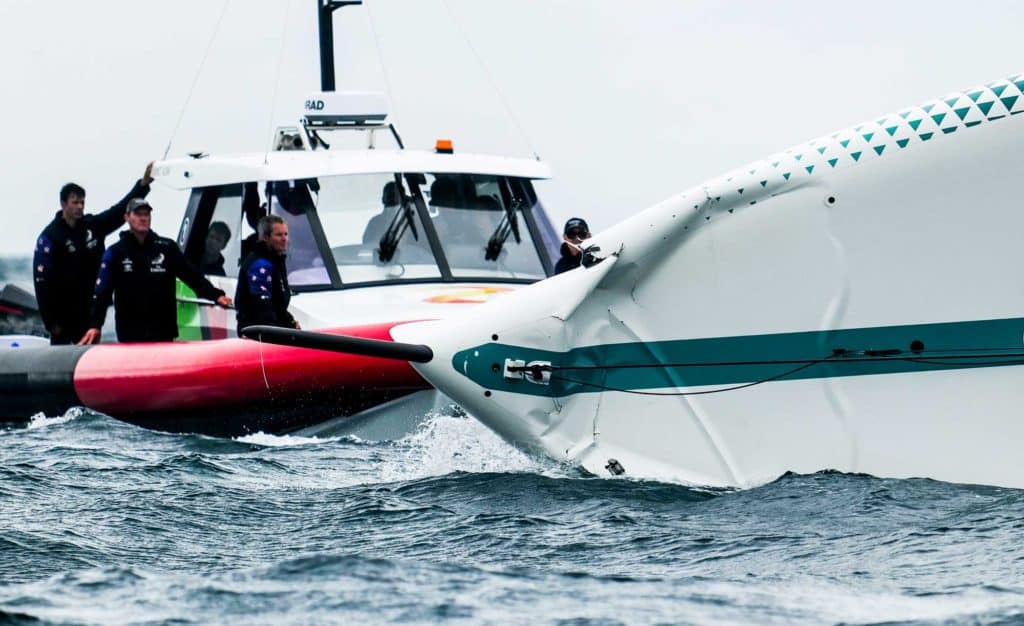 During the recovery, according to team CEO Grant Dalton, a secondary forestay was run through the foredeck to ensure the rig remained upright. Adam Mustill/America’s Cup

ETNZ’s LEQ12 will certainly need a new bow, with the possibility of another ring frame or structural reinforcement, Dalton noted, while also acknowledging that INEOS Britannia’s recently delivered AC40, as well as Alinghi Red Bull’s soon-to-be-delivered, would need “a bit of a retro.”