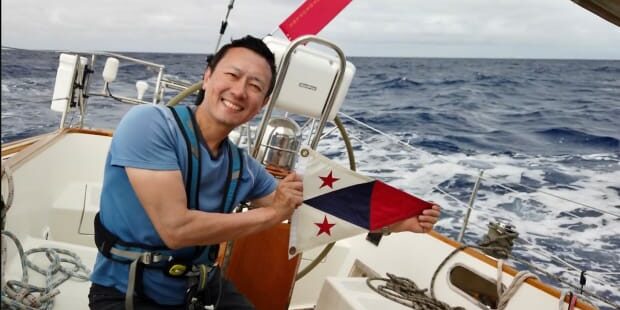 Many people hesitate to change their circumstances because they fear a departure from the status quo, or because they’re used to a life of conformity and security. Change could bring a new set of possibilities and problems.

However, for me, there is no greater joy than an endlessly changing horizon, for each day to wake up to a different sunrise. Ever since my first sailing trip 29 years ago, I have sought that joy, yearning to cast away the security of my daily life and let my spirit roam freely.

This desire to roam inspired me to enter the 2021 Singlehanded TransPac (SHTP) aboard Sea Wisdom, my 1987 Hinckley Sou’wester 42 Competition Sloop. Though I had cruised offshore for over 20 years, this was only the fourth race I had ever competed in, and my second ocean race. The first, the 2019 Great Pacific Longitudinal Race (LongPac), was a 400-mile singlehanded race to longitude 126 degrees 40 minutes and back. It was also a qualifier for the 2021 Singlehanded TransPac.

During the LongPac, I experienced rudder failure when I hit an underwater object at 0200. I lost all steerage and was forced to request rescue from the US Coast Guard. Subsequently, the upper bearing of my main rudder had been redesigned and rebuilt completely in metal.

Going into the Singlehanded TransPac, my primary goals were to finish and to learn from the experience so that I could design my next boat for shorthanded circumnavigation.

After two years of preparation, I thought I knew how challenging this race would be, but I underestimated how mentally difficult it would be to complete the passage in solitude and to cross an “imaginary” finish line at the Hanalei Bay anchorage. Desperation, euphoria and fear competed for equal time throughout the voyage.

My passage was plagued by light winds and assorted equipment failures. At one point, I had to go overboard to work on a repair while staring into the blue abyss. It was all an emotional roller coaster between hopeless despair and beaming bliss while surfing down waves in the trade winds. It was an ultimate test of mental toughness and seamanship, and more than once I was reminded of David Goggin’s Calloused Mind, in which he writes: “You have to build calluses on your brain just like how you build calluses on your hands. Callus your mind through pain and suffering.”

I learned to push the limits of my endurance, to engage in prolonged experiences of cathartic suffering to break down my inner walls, to cleanse my spirit for simpler and purer emotions, and to surpass myself.

In the solitude of the vast ocean, there was an exultant thought that peeled back the veneer of my delusions. We are not grand because we are the superior species or because we can change the environment whose unyielding powers will one day outlast us. We are grand because we are undeterred by our ephemeral presence, because we are bold enough to exercise our will. I sat on the deck pondering this thought for some time, with my perspective as wide as the horizon.

After sailing over 2,000 miles and with less than 200 miles to go, I jibed. Now on port tack for the first time in days, I started looking for any unusual behavior in the boat. I immediately noticed some clicking at the upper rudder bearing. A few hours later I discovered the rudder had dropped an inch. I was shocked, as this recently rebuilt section should have been the most reliable part of the whole boat. I also knew I wouldn’t be able to raise it up in the middle of the ocean with relentless wind and waves.

Instead, I tried to stabilize the situation by minimizing any rudder movement. I reduced sail, locked the rudder on centerline and let the Hydrovane do the steering. To be extra prudent, I slept with my EPIRB next to me and prepared the life raft and abandon ship bags.

I awoke with less than 200 miles to go and considered giving up. I would simply change my destination to Nawiliwili Marina, still complete my goal of sailing solo, but avoid this particularly distressing tack.

That’s when I learned of the outpouring of support coming from Hanalei Bay. Two sailboats and the race committee would wait for me at the finish line after dark. I was no longer alone!

My diary from that day reads: “SHTP sailors and race committee suggested that, once I crossed the finish line, they would help me diagnose the rudder problem, and even offered to have a flotilla of boats to guide me from Hanalei Bay to Nawiliwili. With incredible sportsmanship and camaraderie, they are offering help to encourage me to get to the final line not so far away.”

My tears started rolling uncontrollably. I knew I had to cross that finish line—for myself, my family, my friends and for all those supporting me.

With that, I changed course back toward Hanalei Bay. The wind died down a bit, and the sea was not as rough. Under a hot sun, I doused myself with a gallon of freshwater to rinse off the mess from my tears. I poled out my jib and charged for the finish line like I going to war with Ku, the Hawaiian God of War, and also my race division, even though I was limping along slowly.

At 12:53:52 local time, in the pitch darkness I heard the SHTP race chair on the VHF: “Congratulations Sea Wisdom, you have successfully completed the 2021 Singlehanded Transpacific Yacht Race.”

My heart swelled. A 90hp RIB came alongside, and two race committee members boarded Sea Wisdom. One took over the tiller on my jury-rigged rudder. The other gave me a big hug. I dropped the sails. A light rain started failing, like the sky was cheering for me. Two of my fellow competitors cheered me across the finish line, even though it was well past midnight.

After 18 days at sea, I awoke at 0600 on July 7 and peered out of my tiny porthole to see a massive green wave towering over me. Then I remembered: I was anchored in Hanalei Bay and that green wave was the Nā Pali Coast mountain range.

I’D MADE IT! Tears started again as I thought about the whole experience and everyone who had supported me. I let it all out, like a kid. I cried because of all the love I got from this trip. I cried because of all I learned about what it takes to be human, to love, to be loved, to have gratitude, to strive to stay alive, to figure things out regardless of challenges, to find joy in adventures, and to lift away hopelessness. I cried because I learned there is always a way to move forward.

To all the kids in all corners of the world: dream big. One day you will make it happen. Who would have thought that a little kid from a Long Tang in Shanghai, a kid from an old apartment building in North Point, Hong Kong, a paperboy and janitor from New Jersey, would get to sail solo across the Pacific Ocean to Kauai? To all the children I’ve met while sailing in remote locations: you can do the same. Go for the uncommon. Be the uncommon of the uncommon. It can also all happen to you.

Getting a calloused mind helps.

Ed Note: For more on the biennial Singlehanded Transpac, organized by San Francisco Bay’s Singlehanded Sailing Society, go to sfbaysss.org. To check out a webinar William recently hosted in which he talks about both the race and “dreaming big” in ever greater detail, click here.