The Case for Small Boats 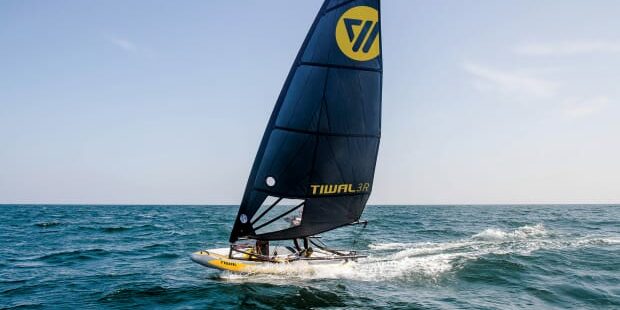 Though they don’t reel off the miles like a performance-cruiser, I would argue that some of the purest, best sailing can be found aboard small boats. Frankly, when it comes to being an expert in trimming sails, balancing loads and steering clean courses, a responsive small boat is a masterclass. And learning to sail a small boat well will undoubtedly make you a better big boat sailor, while the opposite is not necessarily true. That’s why this summer’s crop of new dinghies is an especially exciting one. There’s no better way to get out on the water aboard a simple, speedy little boat.

The just-announced Tiwal 3R has some big shoes to fill, following in the wake of the Tiwal 2, which won a SAIL Magazine Best Boats award in 2019. Not to be confused with the Tiwal 3, which was released almost a decade ago, the Tiwal 3R is a completely new boat, with an “R” for racing and a more powerful rig for speed that caused designer Marion Excoffon to rethink the blades and hull structure as well, making for some exciting upgrades in performance. The daggerboard and rudder are made of a light, rigid composite; the mast and boom are 90 percent carbon; and the boat comes with fully battened sails developed by North Sails. Like the rest of the Tiwal range, including a new “2L” also announced this spring, the 3R is actually an inflatable dinghy that packs down to fit in two large duffel bags plus a sail bag. You’d never know it, though, from the boats’ handling underway. Even the Tiwals not designed for racing are all sporty and responsive. From start to finish, it takes less than a half-hour to assemble the 3R, and the fact it weights a mere 120lb, makes it easy to transport, store and maneuver. The result is clearly a winning formula, as over 2,000 of Tiwals have been sold to date in more than 50 countries. tiwal.com

RS Sailing has introduced a new model to its line that fits between the popular RS Zest and RS Quest models: the RS Toura. The design brief for the RS Toura was to create a dinghy that was big enough for as many friends as possible without losing the light and sporty feel of a dinghy. “As many as possible” turns out to be seven, which is massive for a boat with an LOA of just 15ft 2in, prompting RS Sailing to opt for a more buoyant hull and changes to the transom to make the boat more responsive. The RS Toura is also equipped with a versatile sailplan that includes a reefable main, furling jib and asymmetric spinnaker, making it a good club boat with plenty of versatility. Other highlights include a lifting centerboard and a surprising amount of storage room. The boat can even be ordered with an outboard. The RS Toura’s hull is made out of durable, low-maintenance rotomolded polyethylene, making it a great learner’s boat. With this in mind, the company’s own ranking system recommends the RS Toura for everything from exploring to family daysailing with a crowd of kids. Granted, the boat scores lower in the company’s performance and racing categories, but that’s not really what it was designed for. And if that’s what you want, don’t worry, RS has 14 other models specifically billed as racers. rssailing.com

Another ultralight option is the Rocket from Fulcrum Speedworks in Bristol, Rhode Island, maker of the Foiling UFO. The Rocket is a major departure from the company’s full-on foiling cat, with the aesthetics of a classic American board boat, like the Sunfish or Sailfish, but with upgrades to bring this easy, beloved concept into the modern era. The simple lateen sail is easy to rig, with just one halyard to assemble it all, making it a snap to get from shore to sea and teach kids on. The Rocket is 14ft and weighs in at just 90lb, making for quick acceleration and responsive handling. Since they’re pretty much guaranteed to be used for many kids’ first sails, the hull has been made with a rugged and extra lightweight cored composite construction, which will stand up better to scrapes and bumps. A full-length cockpit stretches almost from maststep to stern, making for plenty of space for kids or cargo. The company even suggests the boat would be great for sail-camping as there’s plenty of space aft for gear. Or a dog. Or a cooler… The possibilities are limitless. fulcrumspeedworks.com