The Commodore’s Story: Ralph Munroe and the Wilderness That Was South Florida 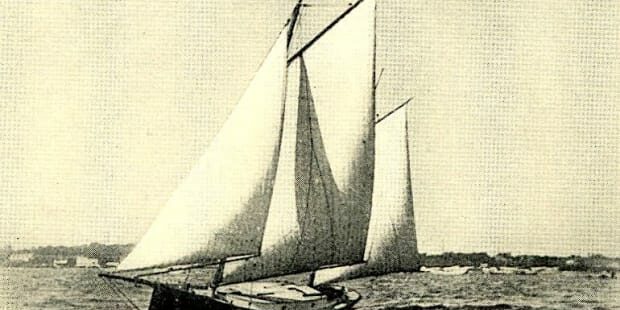 July 14/2022: I must confess I had never even heard of Ralph Middleton Munroe, a.k.a. “the Commodore,” until just 12 years ago, when I test-sailed a very interesting boat called the Presto 30, designed by Rodger Martin, on Biscayne Bay during the Miami International Boat Show. I was informed at that time that this new Presto–a svelte narrow shoal-draft sharpie-like thing with unstayed carbon masts and a unique cat-ketch rig–was inspired by the original Presto (see image up top), a round-bilge sharpie designed by Munroe explicitly for sailing on the south Florida coast 120 years earlier. Since then my appreciation of Munroe, both as an important yacht designer, and as a key figure in the development of Florida, has accelerated a good deal.

I achieved maximum acceleration just this past winter, when I was loaned a copy of Munroe’s autobiography, The Commodore’s Story, published in 1930 and co-authored by Vincent Gilpin.

It is a fascinating book!

Munroe was born in New York, in Manhattan, in 1851, and was raised primarily on Staten Island, a much more rural place at the time. The island then was only accessible by water, and Munroe became interested in boats and sailing at an early age. As a young man, he gloried in sailing out to witness the earliest America’s Cup races live and in person.

Munroe also obviously enjoyed living in primitive circumstances. An early chapter in the book describing the winter of 1872, which Munroe spent living on Fire Island, then nothing but an extremely isolated, mostly unpopulated barrier beach, is a bit startling. He writes: “The experience with cold, ice, snow and surf, and escapes from disaster, hardened my body, and taught me things of the sea ever useful afterward.” An understatement, to say the least.

Hunting for birds to eat while hiding “behind cakes of ice,” saving shipwrecked sailors on the beach in freezing conditions, and skating and ice-boating great distances to fetch provisions were common activities. For Munroe, it was all a grand “vacation.”

View the 10 images of this gallery on the original article

Ultimately, and quite sensibly, Munroe decided in favor of a warmer climate and took to visiting south Florida in the winter. Eventually he settled there permanently. At this time, in the late 1870s, there was no railroad, nor roads of any sort, south of St. Augustine. “The peninsula was nothing more than a vague wilderness,” wrote Munroe. “To me, however, there was no appeal short of Biscayne Bay.” (This in spite of the fact that it didn’t even appear on many maps in those days.) “No more isolated region was found in the country, and scarcely any less productive. The few hardy settlers depended mainly on the products of the sea, together with plentiful game, for food. Green turtle and fish of all kinds were unlimited, the Indians brought in venison, bear, wild turkey, terrapin, gopher (an edible land tortoise) and plenty of the finest ‘pumpkins’ or rather squashes, and sweet potatoes similar to yams, but far better, and of huge size.”

The only way to travel around Biscayne Bay and south Florida at that time was by boat, and Munroe’s talents as an amateur designer were thus in some demand. He specialized in creating shoal-draft vessels that were also comfortable in a seaway. He was, in his day, recognized as something of genius in this regard. He ultimately became very friendly with Nat Herreshoff, and Munroe purportedly was the only other yacht designer who significantly influenced Herreshoff.

I have to admit I didn’t quite read all of this book. The last third, written solely by Gilpin, is pretty dry, and I just jumped around in that a bit. But the rest of it was great–a rare firsthand account of the very early history of the Miami area that will be of particular interest to sailors. The photos, as you can see, are cool too. Munroe was also a great amateur photographer, and his pix are basically the only ones available of the Miami area at that time.

As for the Presto 30, it sadly did fall out of production not long after it was first introduced. But I see there is a chance it will be resurrected by some folks calling themselves Adventure Boatworks.

I sure hope that pans out. It is a very unique boat and a worthy successor to Munroe’s designs.