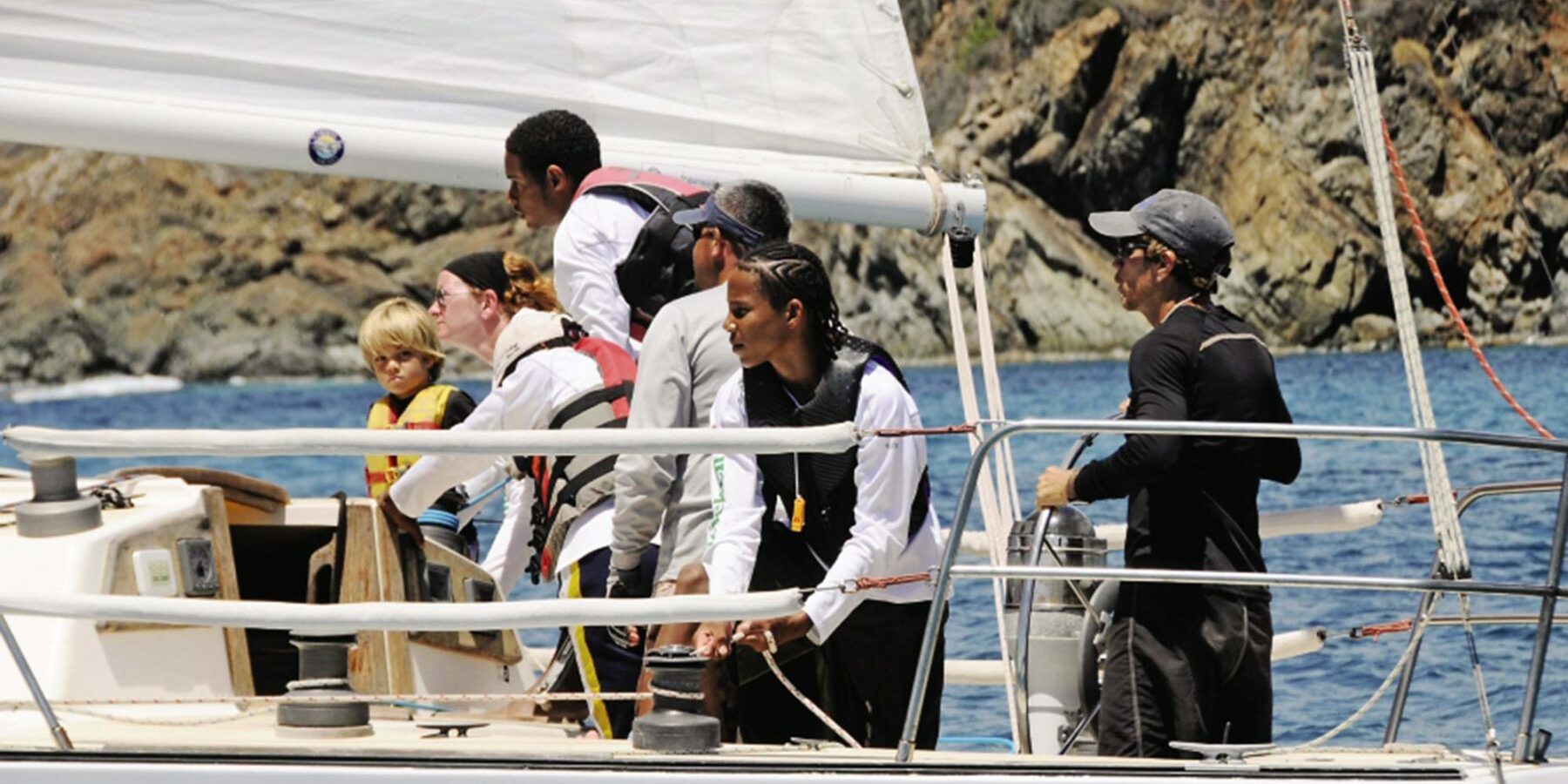 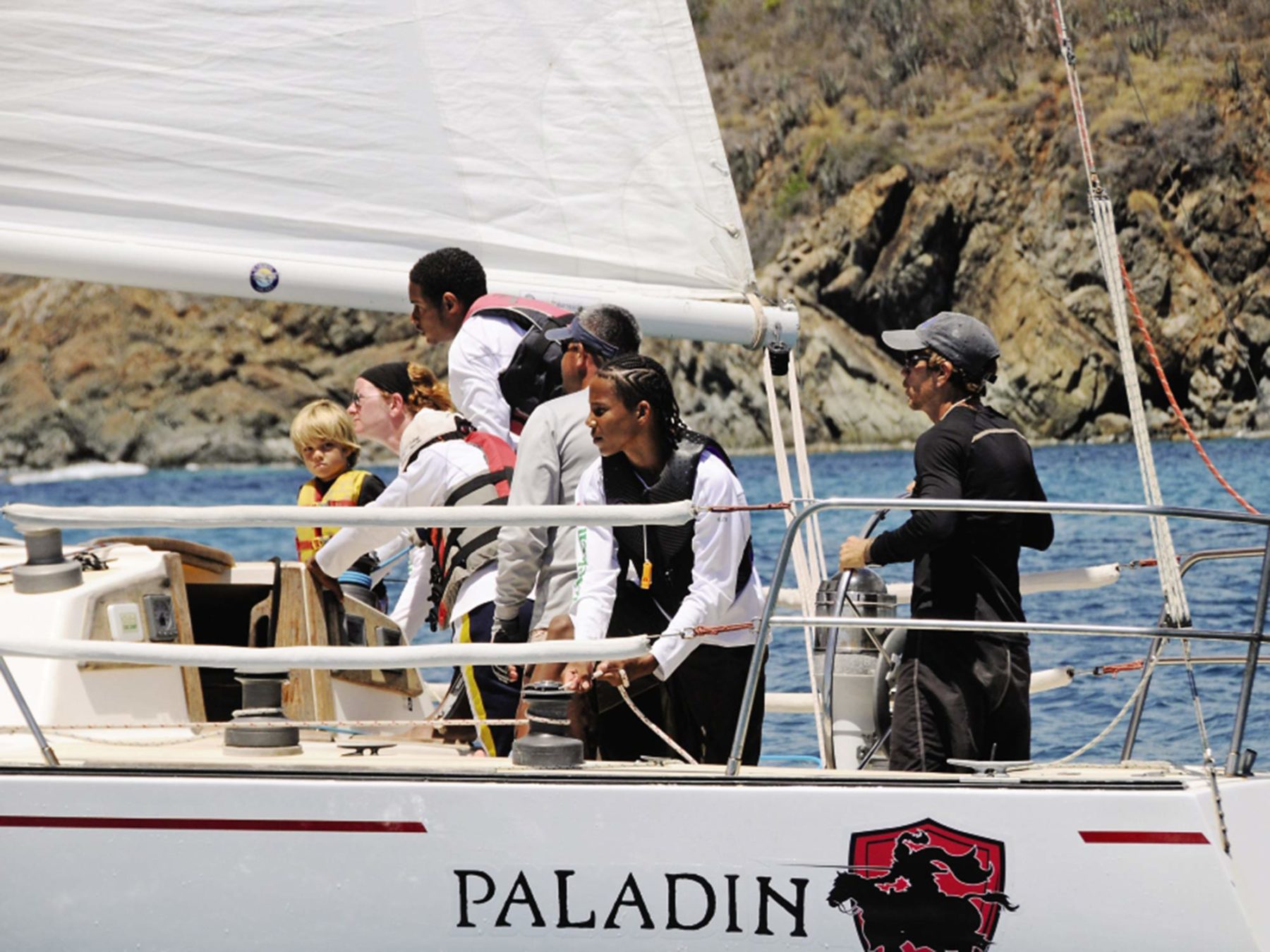 Stan Joines, in 2013, races with a young crew recruited from St. Croix Central High School. The former music teacher has been instrumental in getting young islanders on the water. Dean Barnes

Stan Joines has been racing in the St. Thomas International Regatta for almost three decades, winning the Performance Cruising class a number of times, most recently in his J/36, Paladin. But it’s not so much his participation or his wins that make his story interesting. Since the early 1990s, Joines has been bringing teenagers along with him from his native St. Croix, teaching them to sail, race and simply enjoy being on the water. By his count, he’s exposed 200 to 300 kids to sailing. That’s with no organization, no funding—just Joines giving the kids of Croix a slice of the good sailing life.

“When I first arrived here 32 years ago from Georgia to teach music at St. Croix Central High School, I had never sailed before. But I wanted to. There were some serious sailors here, and I asked them questions about port and starboard, and they looked at me like I was an idiot and walked away. So, I hung out with the kids on the beach.”

Joines, with his boyish looks, sun-bleached red hair and infectious laugh, fit right in as he learned to sail with the local yacht-club kids. “Before long, I’m out there racing in 420s with them. They’re having sea wars, pelting each other with fruit. You learn how to jibe and tack pretty quickly when you’re about to get hit on the head with a genip!”

Joines did learn to sail and, because of the high price of property on St. Croix relative to his teacher’s wages, he bought an Alberg 35 and lived aboard. “One day, I found myself surrounded by a dozen junior high and high school kids. They said, ‘We’re taking your boat to Puerto Rico to race, and you have no choice in the matter.’ I asked them, ‘What about your parents?’ and they said that their parents had already given them permission. So, off we went.”

Joines recalls there being very little wind at that event.

“There were 17 boats in our class. Our heavy boat was able to glide through the holes with momentum, and we beat them all. And that was that.”

From then on, there was a constant stream of diverse kids, ranging from local high-schoolers who had never been on a boat to the yacht-club kids who knew their way around the racecourse. “And they bonded,” Joines says. “A lot of those kids are still best friends, and they’re now in their 40s.” 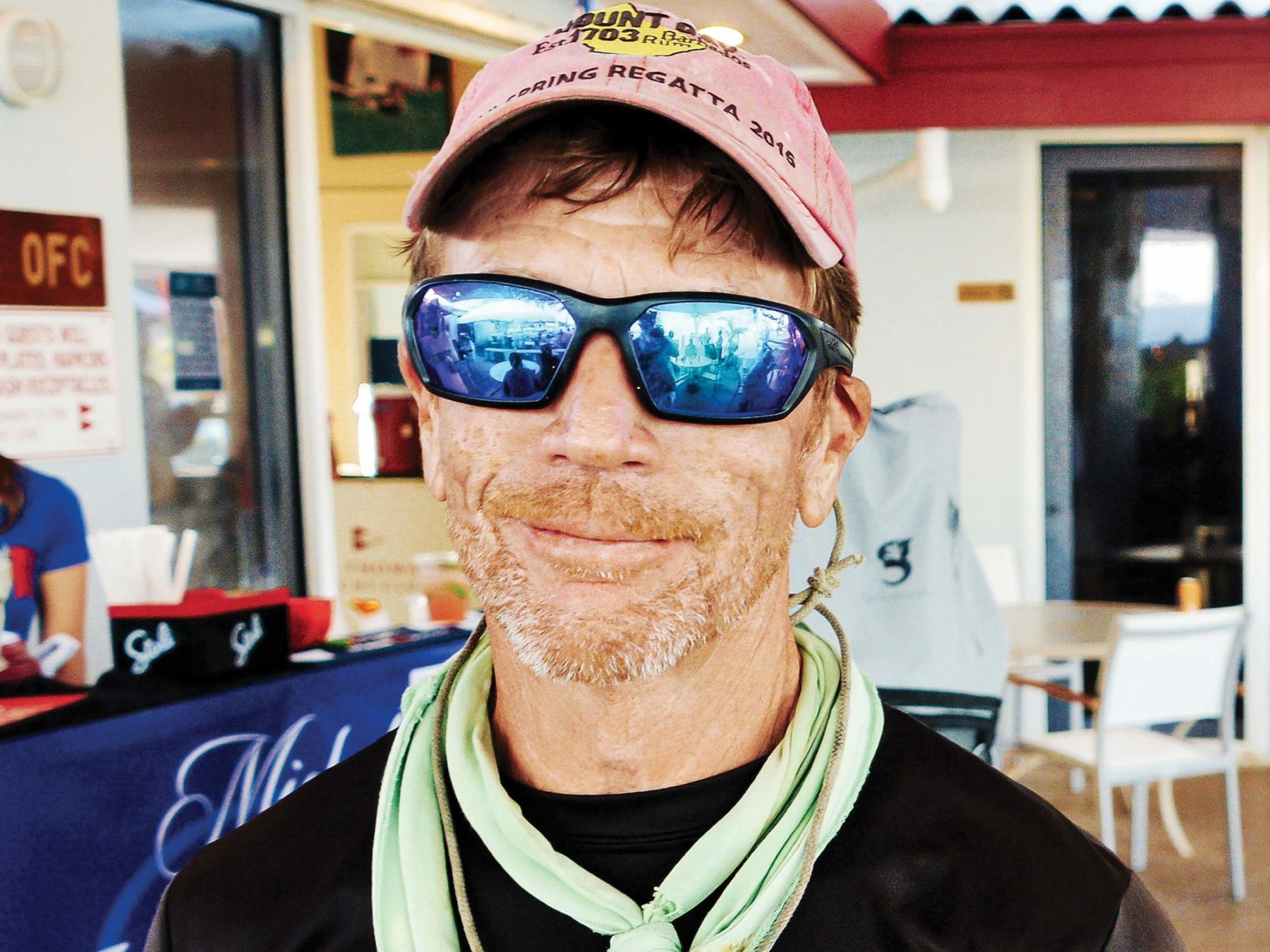 Many of the Virgin Island sailors competing at the 2022 St. Thomas International Regatta credit Stan Joines for introducing them to sailing and the local racing scene. Dean Barnes

One is Peter Stanton, who sails out of the St. Thomas YC. “We were sailing Optis in St. Croix, and as soon as we got on the water, we’d sail up to his boat, knock on the hull and yell, ‘Stan, are you up?’ And he’d come up out of his companionway and throw Chips Ahoy cookies at us. He always had those aboard. He loved it. He was like our big, older friend.

“When my twin brother, older brother and I got bigger, he said, ‘Hey, why don’t you come sailing with me in St. Thomas?’ So, about four to six of us would go over there, sleep on his boat and race. It was just him and the kids. As we got older, we jumped to the spinnaker racing boats, but as we and others moved on, new kids always came aboard his boat.”

Eventually, it got to the point where his Alberg was no longer competitive, so he moved on to a J/36.

“We won the 2013 STIR in that boat, and all the kids were really excited. It was so cool,” Joines says. “I’d tell them what to do, and they’d do it. If it was wrong, well, it didn’t work out so well. But if they had another way to do something, I’d listen, and by gosh, they were usually right. It’s a democratic boat, so everyone has a say—they aren’t treated like kids.”

It was not uncommon for Joines to come home from teaching and find a dozen kids on the dock waiting for him. “They’d say, ‘We’re going to St. Thomas for the weekend,’ and I’d say, ‘Fine.’ And then they’d say, ‘On your boat!’”

The big thing is self-esteem, he adds. “If you treat them like they’re somebody, not necessarily putting up with them, but listen to them, it makes a world of difference.”

Stanton says: “He’d give us some room and then bring us back in. And then he’d show us, and we would be like, ‘OK, you’re right, Stan.’”

It was not uncommon for Joines to come home from teaching and find a dozen kids on the dock waiting for him. “They’d say, ‘We’re going to St. Thomas for the weekend,’ and I’d say, ‘Fine.’ And then they’d say, ‘On your boat!’ So, if I didn’t have a music performance to deal with that weekend, we’d go. We’d get to St. Thomas YC, pick up a mooring in the dark, and then go and get a burger. The next day, we’d go surfing. It was so much fun.”

A lot of kids from the informal Joines school of sailing have moved on to bigger things. Some have become boat captains, and many still race regularly. “One of my former kids contacted me about a month ago, and he’s in Chicago doing design work on some carbon-fiber rocket they’re building out there. He’s also done the Chicago-Mac race for years.”

Joines retired from teaching in 2021, so the pipeline he had to the kids at St. Croix Central High School is not what it once was. His J/36 was destroyed in Hurricane Irma several years back, and it’s been replaced by an aging Albin Stratus given to him. “The sails all don’t fit, and the mast is pushing a hole in the bottom of the boat,” Joines says. “It’d be great to find something better, but until then…”

However, Joines is still at it, racing at the 2022 STIR. Although, now it’s with a mix of adults and kids. But his imprint on Caribbean sailing is indelible. Stanton points to the post-race crowd at STIR and says: “If you look around here, you’ll see a lot of people who sailed with him. Any kid around here that sailed small boats and progressed up into big boats has probably gone through Stan.”