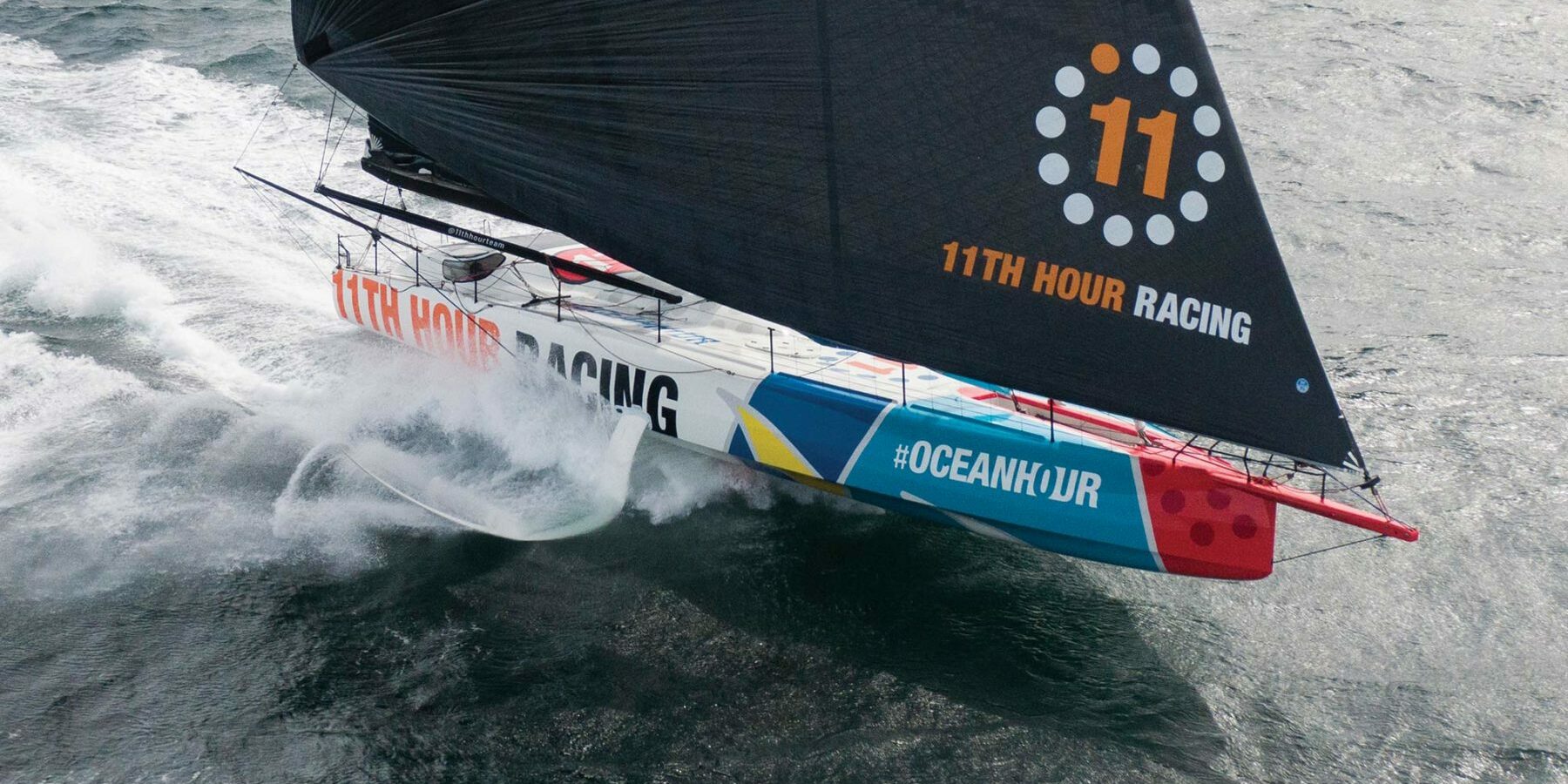 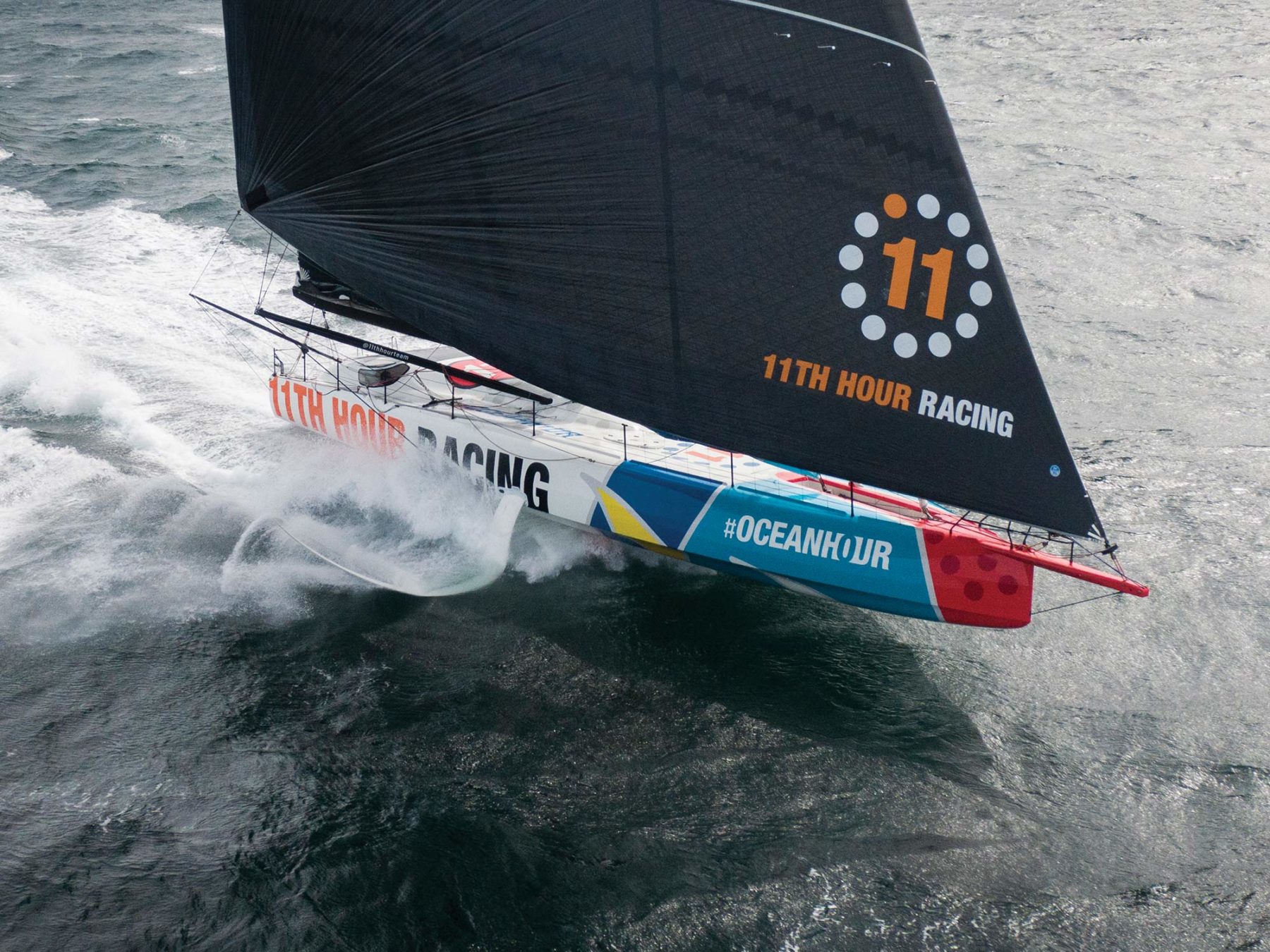 New boats in the IMOCA class are coming out of the sheds thick and fast on the Atlantic coast of France, many of them at the old German World War II U-boat base at Lorient in Brittany. These days, in the fleet made famous by the solo nonstop Vendée Globe round-the-world race, there’s a lot of pizzazz on these occasions. Boats no longer appear and then get quietly lowered into the water. In a class in which millions of euros are being spent on new designs, promotions and messaging, first launches are now previewed by the release of sophisticated video treatments, and the reveals take place with theatrical precision.

It is an astonishing fact in a world teetering on the edge of recession that no less than 14 new IMOCA yachts are hitting the water in the summer of 2022 and into the early months of next year as the arms race in solo offshore sailing gets underway in the buildup to the next Vendée Globe starting in November 2024. 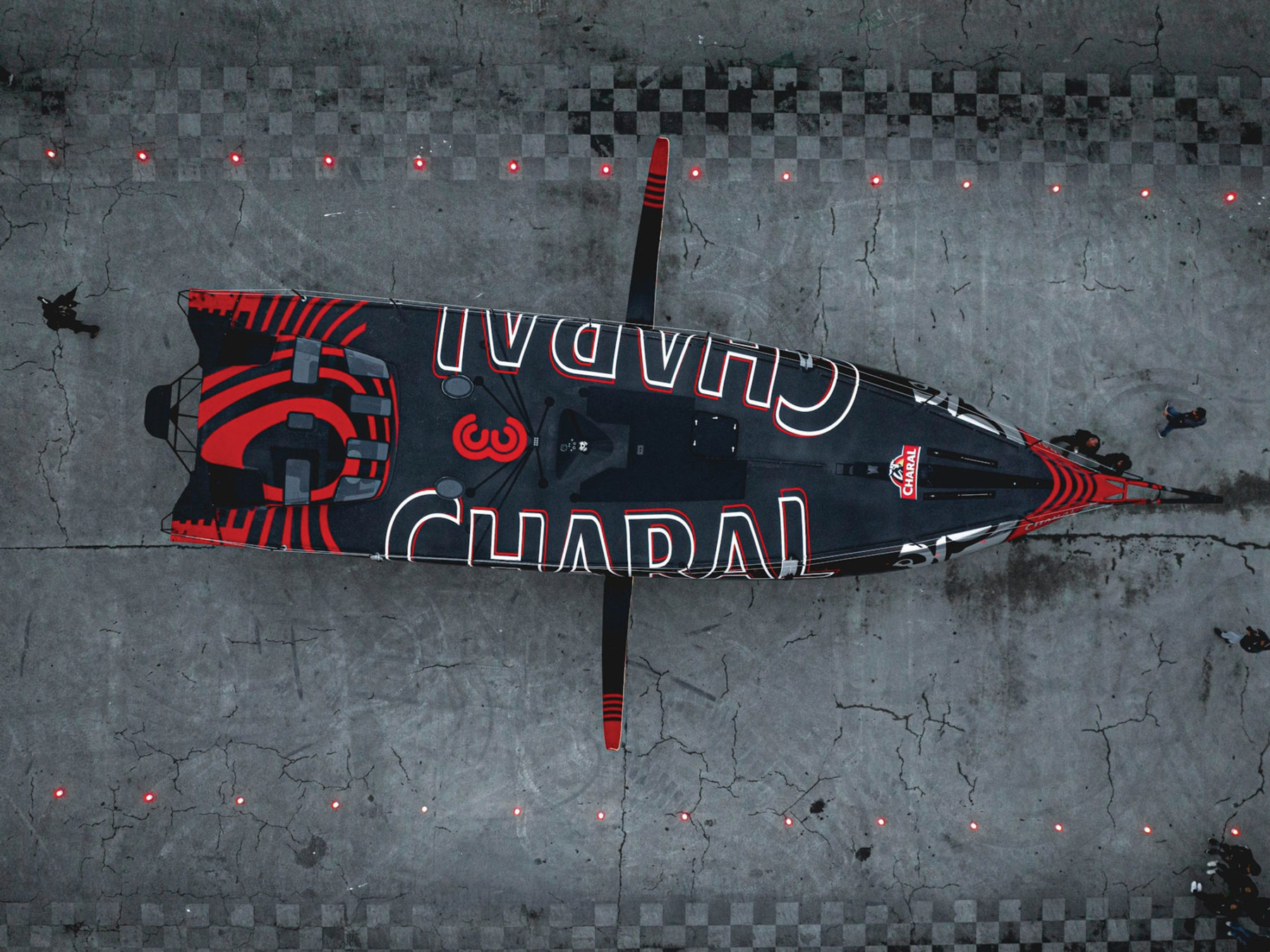 The sorts of ­commercial partners that are paying for these vessels and their skippers range from French banks to alcohol retailers, meat-products ­suppliers, chocolate manufacturers, insurance companies and companies organizing behind charitable causes. International sponsors include software businesses, watchmakers, hotel chains and global-­logistics ­multinationals. Unlike the America’s Cup, there’s not a ­billionaire in sight.

Some of these projects are being done on the cheap, using existing designs, hull molds and other shortcuts. But the top-end packages are now consuming initial budgets in excess of 7 million euros, with average annual operating costs coming in at more than 3 million euros. It’s not for nothing that many observers believe we may now be at “peak IMOCA.”

The class is chock full of interesting personalities, and not all of them are French, in line with the IMOCA policy of trying to broaden its appeal internationally. If you look at the skippers page on the class website, you will see that 19 of the 47 sailors listed are not ­flying the red, white and blue.

The presence of the latter, the skipper of 11th Hour Racing based out of Newport, Rhode Island, reminds us that IMOCA is expanding on two fronts. Forty sailors will take on the Vendée Globe and many of the solo and doublehanded races in the annual IMOCA Globe Series that lead up to it. But there are up to six boats, 11th Hour Racing among them, that will compete for the first time in the Ocean Race starting next January. 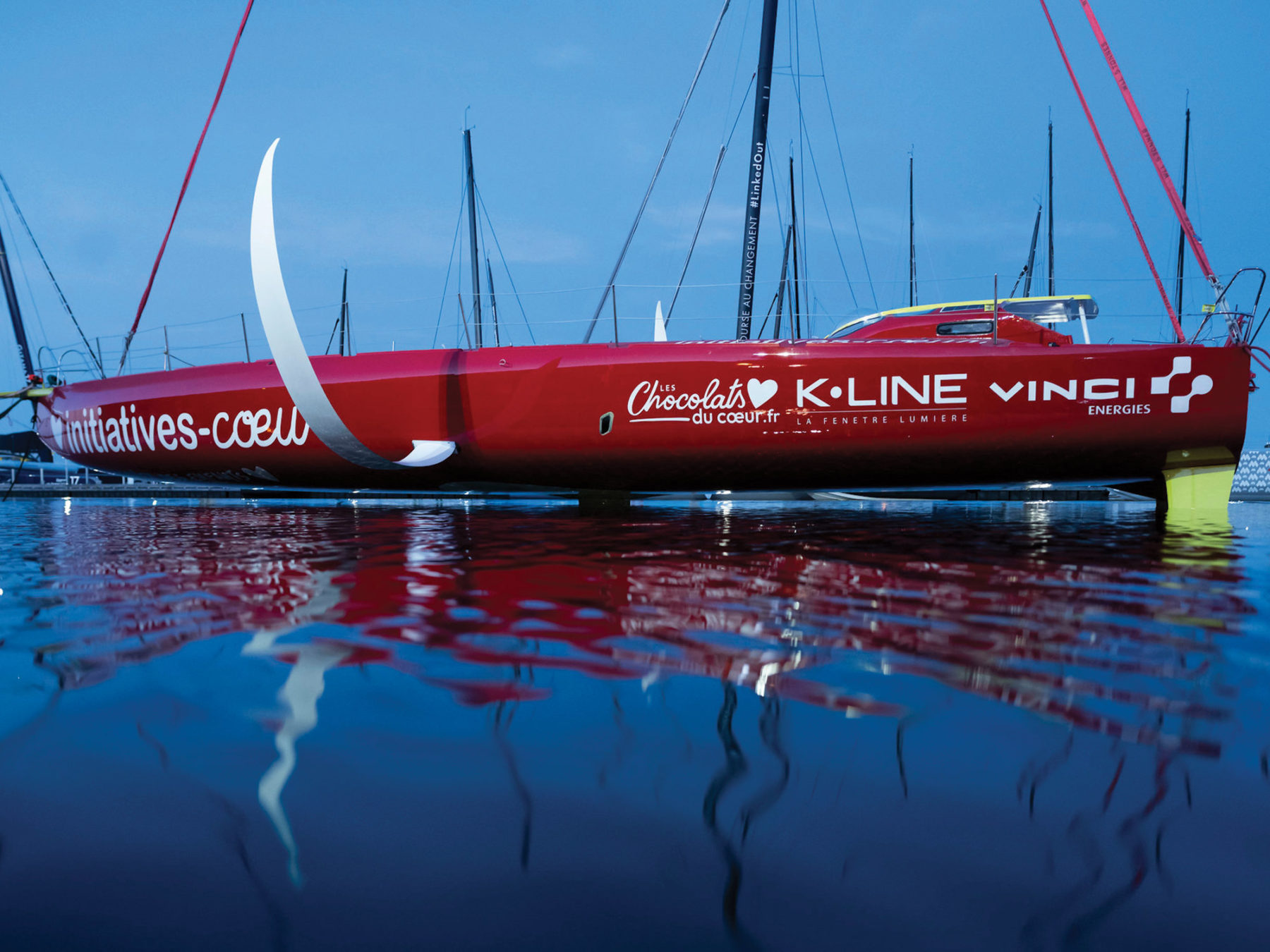 Again, this diversification into fully crewed racing has been led by the class organizers who believe the growing family of commercial partners backing IMOCA sailors will come to see the Ocean Race as a viable option alongside the Vendée Globe in each four-year cycle. The word on the dockside in Lorient is that the class will have taken over the Ocean Race entirely by the next competition by one edition.

So, what’s the secret of all this expansion and growth? One observation would be that IMOCA is prospering at the head of an entire supporting ecosystem of mainly French shorthanded offshore racing. It starts with the Solitaire du Figaro and Mini classes and continues with Class 40s; taken together, they provide a thriving breeding ground for up-and-coming young IMOCA skippers.

Antoine Mermod, the IMOCA class president, says shorthanded offshore sailing is doing well in any case and cites the big growth in doublehanded offshore racing in Europe as evidence for that. But he says IMOCA is also surfing a wave that started during lockdown, when the class hit a sweet spot. Just as the world stopped with the COVID-19 epidemic, its boats were getting ready to take on the Vendée Globe, and they had a captive audience, with up to 20 million people in France alone following the 2020-21 race from home.

“We managed to tell a very nice story, and we saw more people than ever before following the race, so our partners were very happy, and now they are continuing their involvement, and more are arriving to make the class even stronger,” Mermod says. He believes the return on investment for sponsors underwriting IMOCA projects is currently very attractive, and the class is benefitting from its growing international reach.

Top-end packages are now consuming initial budgets in excess of 7 million euros, with average annual operating costs coming in at more than 3 million euros. It’s not for nothing that many observers believe we may now be at “peak IMOCA.”

“We have worked on three different aspects of our communications,” he explains. “One for the public and fans who follow the race. Second is our hospitality program, where we organize events in which people can sail on our boats and live the reality of the sport. And the last aspect is about values. I think our values—sustainability, resilience and ­teamworking—are very appealing in the corporate world of today and for people generally.”

Mermod is delighted to see America-based partners coming into the class—like 11th Hour and the California company Medallia, which backs the British sailor Pip Hare—but he would like to see more. “Within the next two years, we will be at Newport for the stopover of the Ocean Race and then at New York for the prologue of the Vendée Globe in 2024,” he says. “The US is very important to us as we look forward.”

IMOCAs are governed by a class rule that standardizes some elements, like masts and keels, to keep costs down while allowing development in other areas, like hull shapes and foils. In this latest generation of boats, the emphasis has been on trying to improve downwind performance in big weather, a critical aspect of Vendée Globe racing on the Southern Ocean. 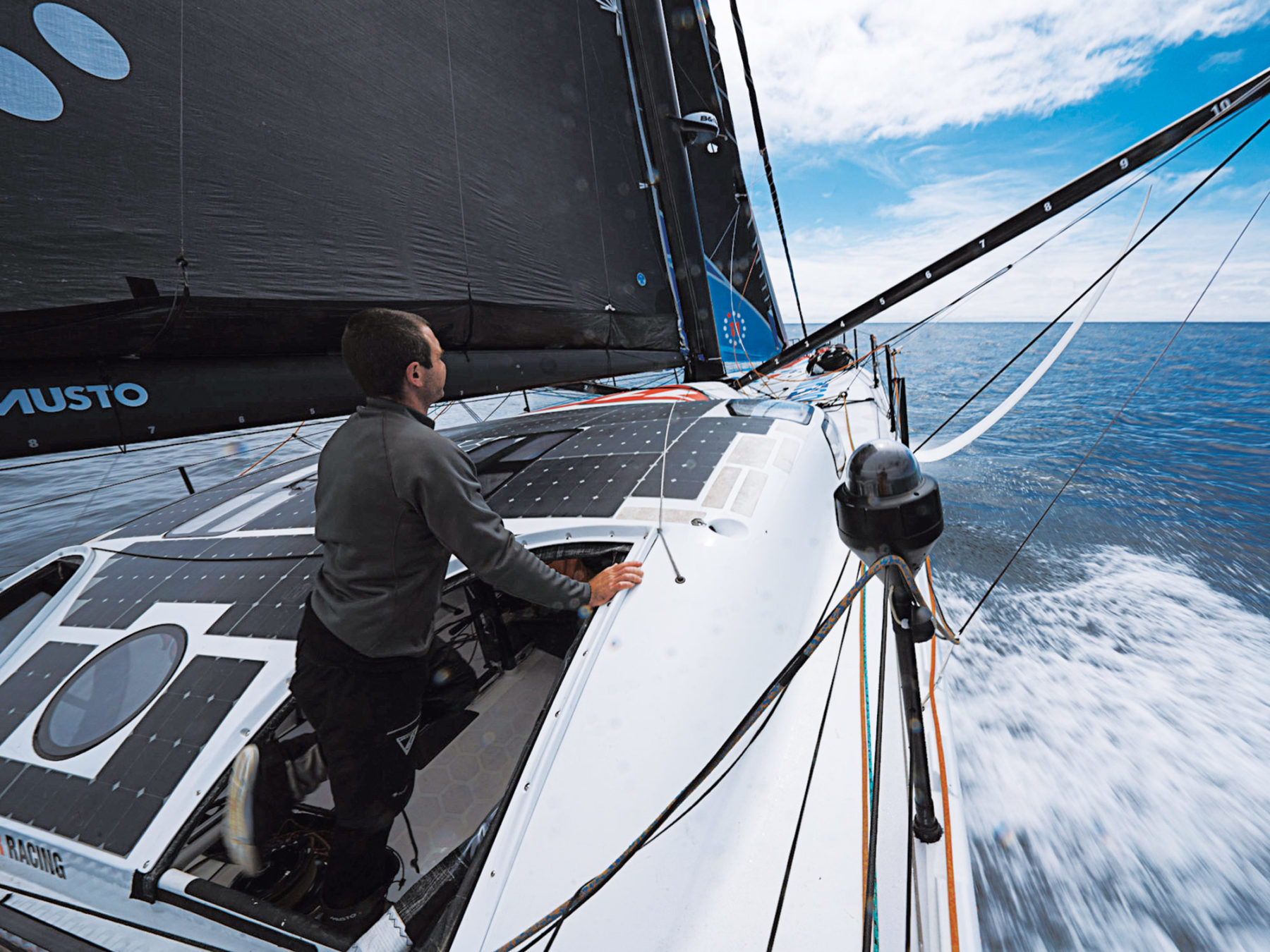 Protection from the elements is essential with the foiling speeds of the IMOCA 60s, and inside the covered cockpit of Malama is where the crew of five will work for the upcoming edition of the Ocean Race. Amory Ross

“They have all concentrated on the bows, with various solutions to try to stop the boats ploughing into the back of the wave in front,” explains former LinkedOut team manager Marcus Hutchinson. “When they do that, the old ones can decelerate from 30 knots to 12 to 15 knots in a few seconds, requiring the sailors to retrim and relaunch the thing every time.”

The scow bow favored by French naval architect Sam Manuard, designer of Jérémie Beyou’s Charal 2 and Bureau Vallée (the former L’Occitane En Provence skippered by Louis Burton) is one solution. “The ones with scow bows, or missing bows, are trying to organize it so that the bow knuckle and everything below half-height of the bow isn’t held back by ploughing into the next wave and slowing the boat down,” Hutchinson adds.

The bottom line is that the top speeds of these wild machines, which can hit 35 knots, are not going to change, but average speeds should be significantly higher. The upshot being that, all other things being equal, including the weather and each boat’s reliability, the 74-day record for the Vendée Globe set by Banque Populaire in 2017 should be ­broken next time round.

The newest boats also ­continue the trend of trying to protect the sailors, often incorporating enclosed cockpits to help them exist on super-light and super-powerful platforms that become violent, noisy and wet in full-on weather offshore. 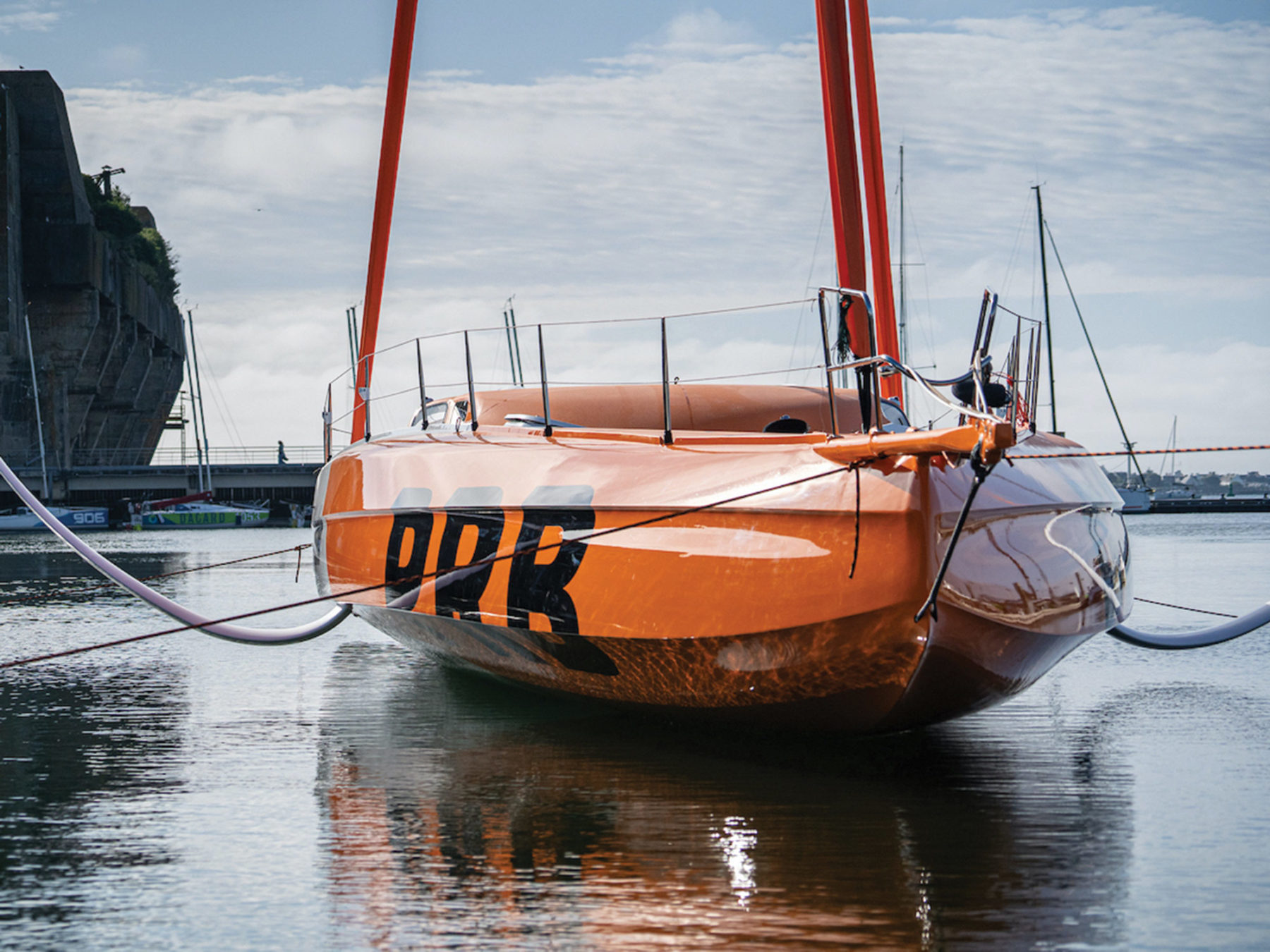 The class is always in flux as new boats come in and the older ones get handed down, producing races within races and different divisions. But it has never been more congested at the top end, with the most aggressive and competitive sailors set to fight it out for supremacy over the next couple of years.

The 38-year-old Frenchman Charlie Dalin, skipper of Apivia, is currently top dog after taking line honors in the last Vendée Globe and winning a series of shorter offshore races, where he showed his consummate skill as both a soloist and fleet racer. But the battle to get ahead of him is going to be fascinating. Dalin will have a new Guillaume Verdier-designed boat of his own to bring up to speed next year, but so will his main rivals—among them Beyou and Kevin Escoffier, a hugely experienced, technically minded offshore racer. Also in the mix will be the winner of the last Vendée Globe on corrected time, Yannick Bestaven, on a new Maître Coq.

But there will be plenty of others to keep an eye on, not least Frenchman Maxime Sorel, a former winner in Class 40s, who has a stunning-looking new V and B-Monbana-Mayenne, and Sam Davies in her new Initiatives-Coeur, another Manuard design.

The coming big race is the solo Route du Rhum-Destination Guadeloupe from St. Malo to the Caribbean, starting in early November. This will see many of the latest boats make their debut on the transatlantic course. It’s going to be an interesting watch as the newest foilers are tested in the heat of battle for the first time. Past experience suggests some of them will complete the course, but some may well encounter early teething troubles as they begin their long march to the Vendée Globe starting line.