The Ocean Race to be “Climate Positive” 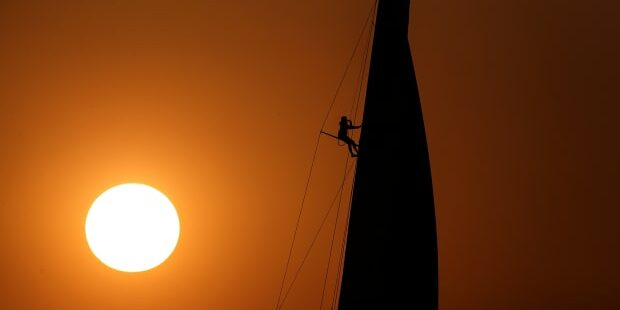 The 2023 Ocean Race intends to be one of the world’s first climate positive sporting events, offsetting more greenhouse gasses than are produced. The two-fold effort means cutting emissions by 75 percent and investing in ocean projects that sequester carbon and restore ocean health.

“Sport has the power to inspire and accelerate action, and nowhere is this more important than in the race against climate change,” says Meegan Jones, Sustainability Advisor for The Ocean Race. “We’re drastically cutting emissions compared with the last Race in 2017-18, but creating a climate positive event can only happen with the support and input of every organization that the Race touches. While some event organizers offset their partners’ emissions, we believe that the responsibility should be on everyone involved to play their part. By doing this we don’t just reduce the impact of a single event, but help to create change throughout the industry.”

For most spectators at home, the only significant difference will be that the event will take place over six months rather than nine, which is sure to be grueling for the competitors. Otherwise, it’s all back-end changes like shipping fewer containers between stopover cities, reducing the number of staff flying from place to place, and the ambitious goal of powering every event site with 100 percent renewable energy.

Race teams, host cities and partners will be monitoring their estimated carbon emissions in order to invest in blue carbon initiatives, which protect and regenerate mangrove habitats, sequestering carbon, protecting coastlines, and providing wildlife habitats. These carbon sequestration projects aim to offset the greenhouse gasses produced by the event.

“While the public conversation around the issue has shifted from the term ‘change’ to ‘crisis’ and ’emergency’, we all need to take bolder steps to reduce our emissions,” says Alessandra Ghezzi, Communications Director of The Ocean Race’s Premiere Partner 11th Hour Racing. “We can do this only through strategic collaborations. At 11th Hour Racing we are supporting The Ocean Race so they can provide the blueprint for running world-class sporting events while also being climate positive. All the how-to materials will be available online to any organization, event, and team to set their own climate goals and strategy.” 11th Hour Racing is also the title sponsor of the American IMOCA 60 team spearheaded by Mark Towill and Charlie Enright, which has recently released a build report on their emission-cutting IMOCA 60 Malama and is working to help yacht building supply chains move towards greener materials and practices.

The next edition of the race starts in Alicante, Spain, on January 15, 2023. For more, visit theoceanrace.com