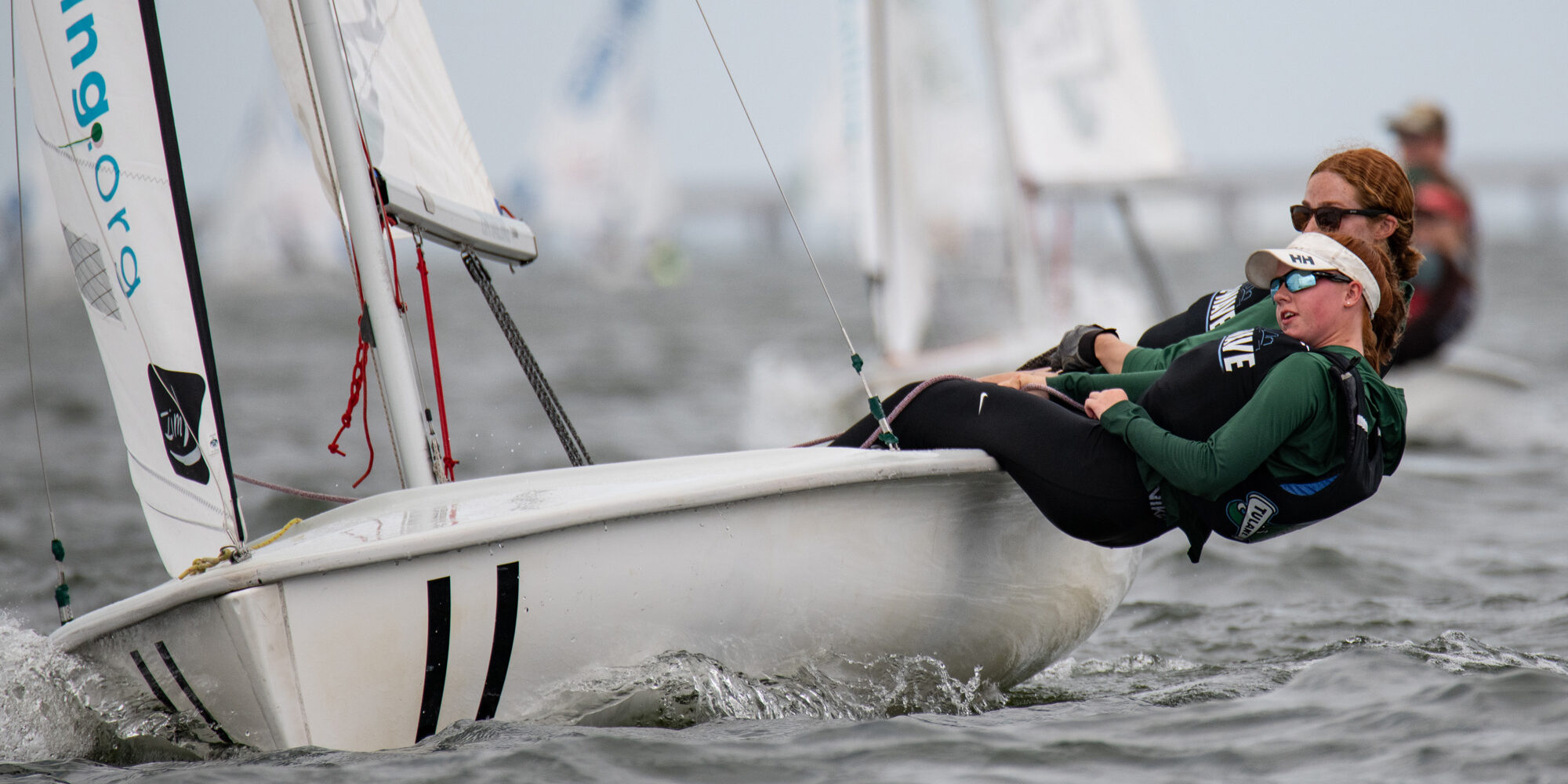 Tulane’s Asher Zittrer had no idea how critical his final race of the college sailing spring season would be when stepped into his 420 and sailed to the racecourse for what would ultimately be the last B-Division set of the 2022 College Sailing Open Dinghy National Championship. All he knew was that his team couldn’t give up five or more points to Yale in order to clinch the win.

“Going into that last race we didn’t know that we were under that much pressure to get the exact score we needed to clinch the win,” Zittrer said. “We’d just had a really tough first one and we really wanted to make sure we didn’t get bogged down by it and have a good second one. We didn’t actually know that was the last set either. We thought that we were going to have a lot more racing after that. I guess I’m glad that no one told us because we didn’t have any pressure.”

When the wind all but disappeared and the racing was called off, Zittrer and the Green Wave squad had secured the school’s second fleet racing national championship, 49 years in the making.

The championship kicked off on Saturday morning in New Orleans with A Division in 420s and B Division in FJs. Competitors saw conditions with breeze coming from the southeast at around 15 knots. Racing was halted in the midafternoon due to thunderstorms, with Tulane leading with a total of 102 points. Boston College sat in second place with 108 points. Dartmouth and Brown University were tied for third with a total of 111 points.

Greg Wilkinson, Boston College Head Coach, stated after the conclusion of the first day’s races, “The racing is incredibly close. You miss one shift near the top mark and you can drop eight or ten boats. We had a few nice comebacks.” 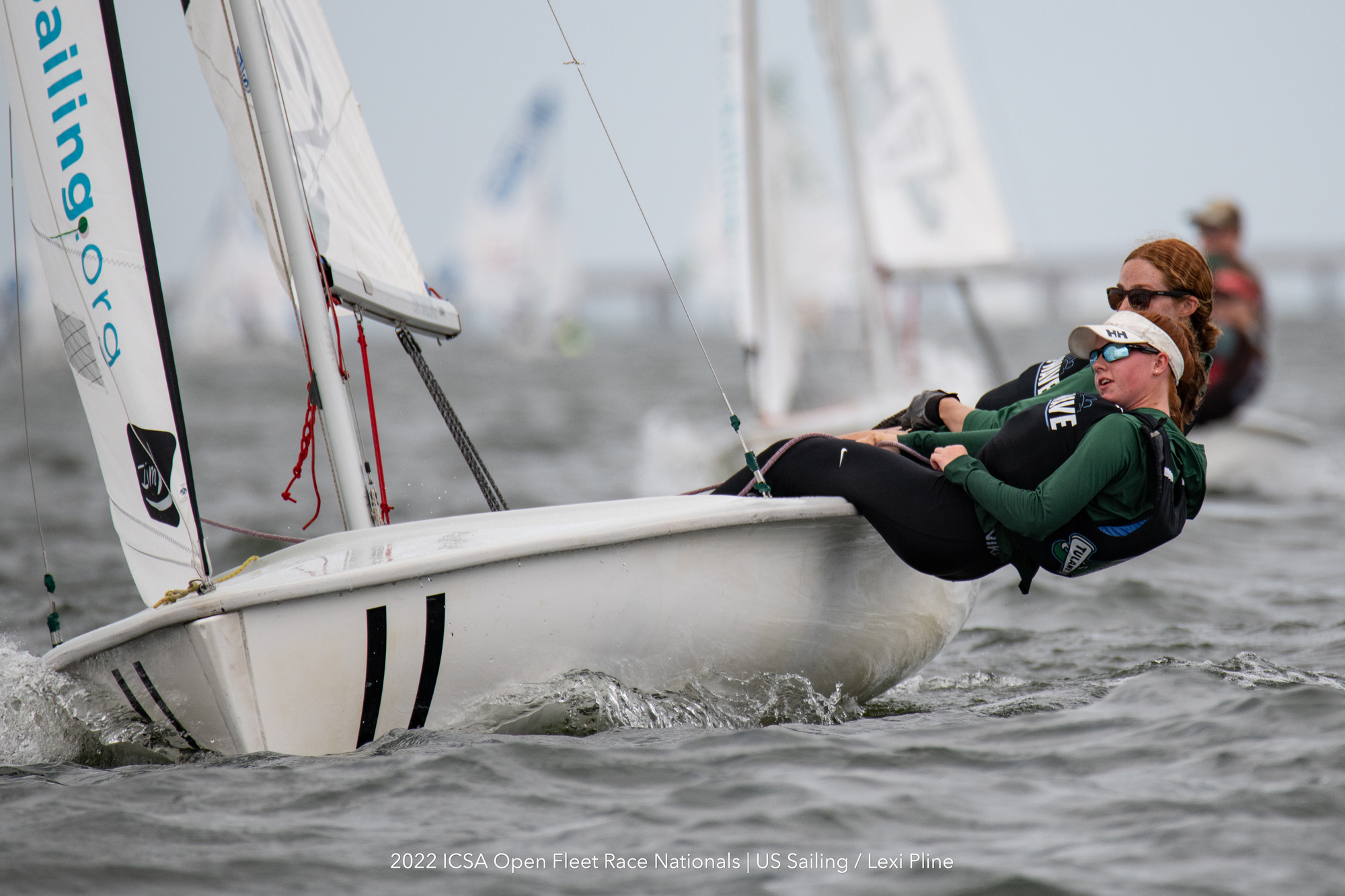 At the conclusion of Saturday’s races, Robert Bragg (’23) and Eloise Burn (’21) of Dartmouth led A division with a total of 36 points. JC Hermus (’22) and Fiona Lobon (’22) of the United States Naval Academy trailed in second with a total of 51 points. Cameron Giblin (’23) and Andrea Riefkohl Gonzalez (’24) of Tulane University sat in third place with a total of 52 points.

“I would say the sailing has been pretty shifty and there were big puffs rolling through the course,” Burn said, recapping the day. “Sometimes it could be hard to predict but at the end of the day we’ve been comparing it to the Charles River which I think most people here have sailed and everyone in NEISA is very familiar with.”

“I just found myself on the right side of the course looking for the pressure coming off the land and so far, it’s been going pretty well,” said McGranahan after racing.

Tulane was able to hold on and secure the regatta win with a total of 223 points.

“Like Asher said, we had no idea, so after that second to last rough one I was just like keep your head straight and just get a good one off,” says Zittrer’s crew Gillian Perrell (’24). “The moment we knew was when I looked at my teammates on the pin boat smiling and we couldn’t believe it. We were like no way. The rest is history.”

“We were really looking forward to this event and going in today winning is the dream scenario. You know you couldn’t ask for a better situation going into the second day of the regatta. Really proud of the team just staying composed and getting the job done. Really happy to bring home a win.”

Giblin’s crew, Riefkohl Gonzalez added, “It’s really exciting to get a win on our home turf, so we are really excited we have our whole team here to celebrate.”

McGranahan, Marlo, Ogata, and Christopher Wang (’23) of Harvard University won the B Division with a total of 114 points. Following them were Jack Egan (’25) and Catherine Webb (’23) of Yale University and they finished with 119 points. Rounding out the top 3 were Asher Zittrer (’23), Ciara Rodriguez-Horan (’22), Gillian Perrell (’24), Kit Stoll (’23) and Lucy Spearman (’25) of Tulane University finishing with 125 points.