Two Days of Distance Races on Tap For St. Pete 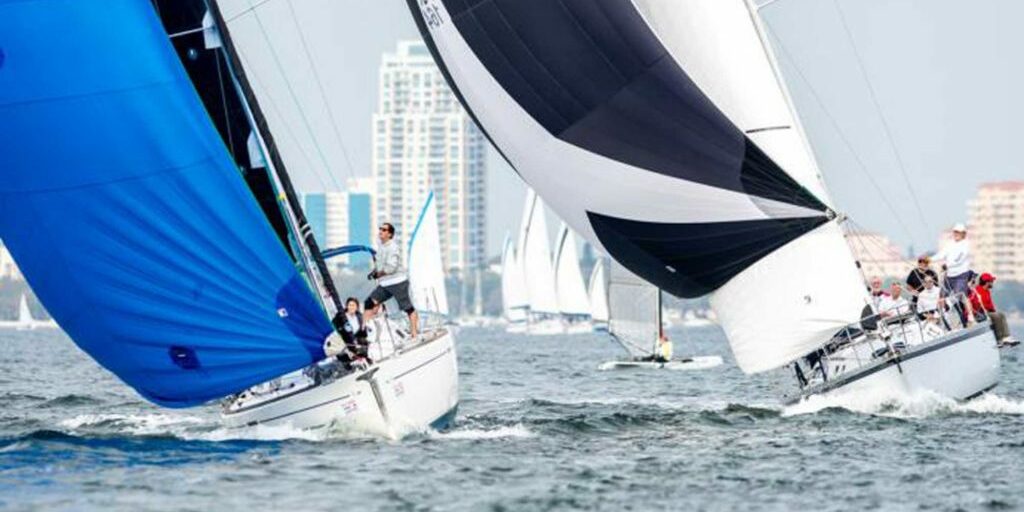 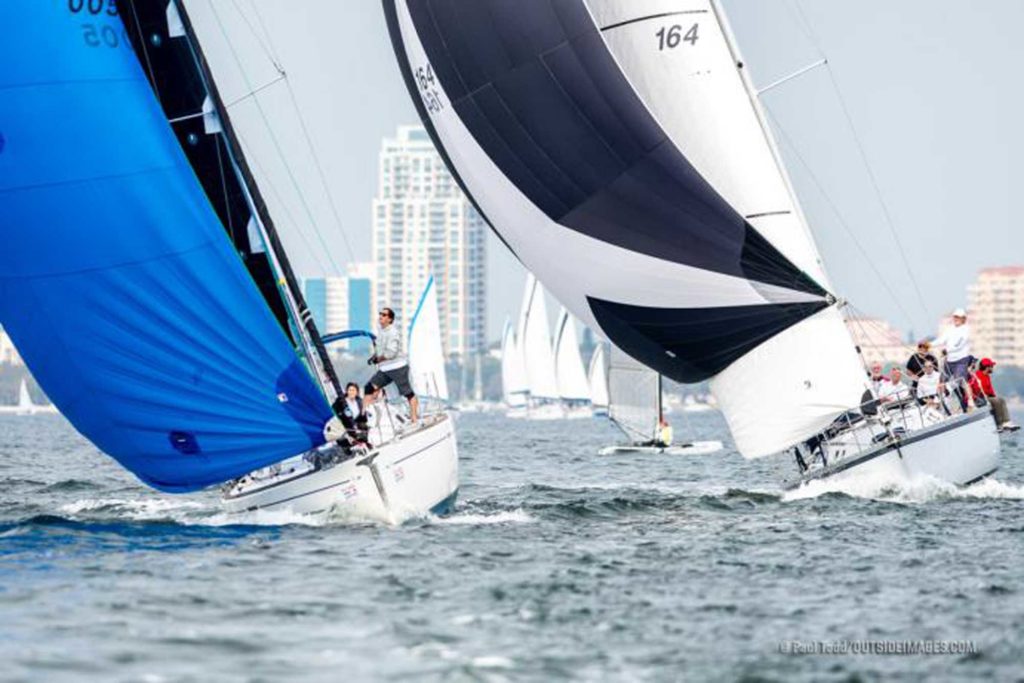 If anyone is looking for Antonio Sanpere on the third weekend of February, scan the horizon from the St. Petersburg shoreline and look for his diminutive blue C&C 24. The 82-year-old Sanpere will be on the helm of Cayennitta III, chasing down his competition like a hound on a hare in the new Helly Hansen Sailing World Regatta Series Distance Race. And chances are he’ll be cruising toward another trophy to add to his collection.

Sanpere has been a perennial jib-and-main racer in the Helly Hansen Sailing World Regatta’s informal one-day “Rally” race and it was he who last year pleaded with regatta organizers to offer not one, but two days of long-course racing for Tampa Bay’s more serious cruisers. Organizers listened and Sanpere now has his wish with back-to-back days of around-the-bay racing now on the docket for this February’s regatta.

Sanpere was, of course, first to sign up and has some major news to share with the fleet: He’s finally replaced his 30-year-old sails with a fresh inventory, so good luck. “The only boats that can beat me are boats that fly spinnakers,” he says of his 24-footer. “Nobody else can beat me without a spinnaker. No one.”

For anyone in the southeast looking for some long-course racing this winter, consider that a challenge laid.

Sanpere, however confident he is today, will have his work cut out for him as the growing entry list has a handful of serious contenders on the scratch sheet. The races will use PHRF as the handicap system of choice, so as a bonus for Distance Race competitors, the weekend’s final results will count toward the region’s Boat of the Year scoring. There will be both spinnaker and non-spinnaker divisions, as well as a cruising division.

Regatta organizers expect the new two-day offering to be a strong draw for the sailors of nearby Davis Island and other points around the bay because the long-course format is appealing to new and seasoned sailors seeking an alternative to traditional windward/leeward courses.

“As a matter of fact, this type of racing is a real and growing thing here on the bay,” says North Sails’ Brian Malone, who is also the Davis Island YC Fleet Captain. “In the racer/cruiser fleet, the boats are being sailed by younger people and they’re going for minor sail upgrades and they do use a spinnaker while racing 100 percent of the time—that’s the largest and fastest growing fleet in the area. We’re not talking about the salty liveaboard cruisers with davits and dinghies…these teams want to race and have better sails.” 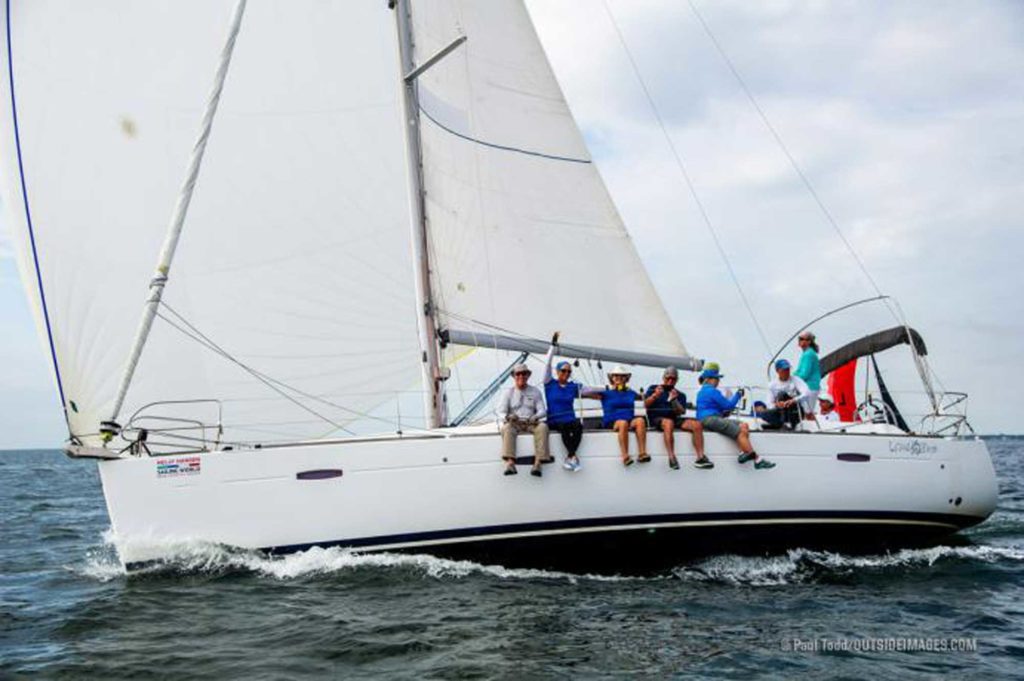 One notable and early entry in the Distance Race’s PHRF Spinnaker division is Harvey Ford and Tom Mistele’s J112e Silver Surfer. Ford says he will sail both race days doublehanded, with Chris Bergstrom as his teammate. The two of them know the lay of Tampa Bay well, especially Ford, who’s spent more days sailing on the 400-square mile estuary than he could possibly remember. His advice for those keen to take on the daily Distance Race experience is to heed the tidal flow. “Read the tide charts closely,” he says. “If it [the tide] is going against you, you don’t want to get into it, especially if winds are light.”

For visiting teams, Tampa Bay’s primary shipping channel, which runs north-south, should definitely be a major tactical consideration, he adds, and there are noteworthy shallows along the eastern shore that reach quite far into the bay: “With the water color change you’ll see it before you know it.”

As for local knowledge on the wind direction and habits, Ford offers that in early winter, the westerly sea breeze tends not to be strong until late in the day, and if it’s a true thermal sea breeze, it typically starts rumbling on the east side of the bay first before working its way west, which may seem counterintuitive for anyone unfamiliar with the bay.

Personally, Ford has fingers crossed for the timely passage of a cold front and the swift winds that traditionally follow because longer legs suit his style and his boat. It’s good to have a lot of runway to enjoy the ride and set up for the next maneuver, especially when sailing doublehanded.

The random legs of the new Distance Race long courses also appealed to Scott MacGregor, a professional boat captain from St. Petersburg who has finally pulled his Melges 32 Trash Panda out of long-term storage for the occasion. He’s looking forward to knocking off a pair of fast 15- to 20-mile races with a crew of seven of his friends.

“The two-day PHRF distance-race format is what enticed me,” says MacGregor, who was instrumental in developing nearby Davis Island YC’s Melges 32 fleet a few years ago. “It’s a nice change of pace from doing the typical windward-leeward. I really enjoy sailing out of St. Pete because you’re into deep water pretty quickly, it’s typically flat and the sun is usually shining, which is a good combination for stretching our legs a bit.”

St. Petersburg YC’s experienced race committee will manage the Distance Race starts and finishes, which will be staged off St. Petersburg’s New Pier. Early starts are scheduled for Saturday and Sunday (at 1000, if the wind cooperates, of course) and the goal, says Jody Abrams, SPYC’s Regatta General, is to provide a full day’s race and get competitors back to the dock for the nightly regatta parties. There are a variety of course types available to the race committee using navigational marks, Abrams says, and they’re really only restricted by the regatta’s other four courses.

“Tampa Bay really is ideal for this sort of thing because we have the ability to go out from downtown St. Pete and sail out under the amazing Skyway Bridge. We can adjust the courses anywhere from a 10- to a 20-plus mile course and have long legs that offer different challenges. It’s open water, but it’s not open-ocean water, so we can take less experienced people out there and do these types of races.”

Abrams is enthusiastic about the Helly Hansen Sailing World Regatta’s two-day format and considers it a better opportunity to engage a wider variety of teams. “With this format, you have a better chance of having the right conditions for your boat on the day,” he says. “Plus, a lot of people work Fridays and can’t always do the full regatta. We are getting more and more people requesting the random-leg distance type races because they don’t have to worry about every little windshift [like you would on windward/leeward] and instead can focus on the sail trimming and getting the most out of their boat.”

Regatta registration is now open, and with nearly 150 entries to date, Abrams says the club is still able to allocate member slips for visiting teams. There’s only so much room in the basin, however, so if Sanpere’s challenge is appealing, don’t delay in accepting it.