Ultims to Race Solo Around the World 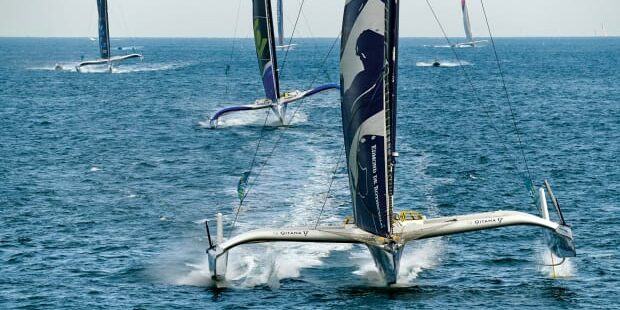 For years now, maxi-trimarans, both solo-sailed and fully crewed, have been racing the clock on their own around the world in an effort to set ever faster records for the world’s fastest circumnavigation under sail.

Back in 2000-01 there was also a no-holds-barred round-the-word event dubbed simply “The Race,” in which the maxi-catamaran Club Med beat out five other fully-crewed catamarans to the finish. Never before, though, has there been a head-to-head round-the-word race between the 105ft boats making up the spectacular maxi-trimaran Ultim 32/23 class—until now.

This past spring, Arkéa, a major player in sports sponsorship that has been active in ocean racing for several years, announced it would be sponsoring the first two editions of brand-new solo-sailing event, à la the quadrennial Vendée, featuring up to seven Ultims. In doing so, it put into place the final piece needed to make the event happen. Although details for the Arkéa Ultim Challenge, as it’s being called, were still being ironed out, at press time no less than five veteran sailors, including Sobdebo’s Thomas Coville, Banque Populaire’s Aarmel Le Cléac’h and Maxi Edmond de Rothschild’s Charles Caudrelier, were reported to have officially signed on for the event, which will take place in 2023—no great surprise given a race like this has been a dream of France’s sailing elite for what feels like ages.

The race will start and finish off Brest, France, and it is expected the fleet will take 40 to 50 days to complete the roughly 24,000-course down to the Southern Ocean, where it will sail round the Cape of Good Hope, Cape Leeuwin and Cape Horn before heading back up into the Atlantic.

“Last December, we were very happy to be able to announce Brest as the port of departure and arrival of the 2023 Ultim Round the World Solo Tour. Today, we are proud to announce that Crédit Mutuel-Arkéa group has become the title partner,” said Hervé Favre, president of race organizer OC Sport Pen Duick. “Having such a partner by our side…and with whom we share the same values and commitments, reinforces our ambition to go further in this exceptional sport that is ocean racing.”

“The Ultim 32/23 Class has been nurturing this ambition to see its fantastic machines circle the planet, racing and solo, for years. This extraordinary project is now a reality. We rejoice because it was a long road to get there,” said class president Patricia Brochard.

Suffice it to say, the race will be defined by superlatives in pretty much every way imaginable. These are boats after all, that despite their immense size a now take flight in full-foiling mode on a regular basis and regularly experience hurricane-force apparent winds out on deck.

Granted, this won’t be the first time such boats have been solo-sailed round the world. However, the fact the skippers will be racing against other sailors, as opposed to racing the clock, can’t help but add an element of drama that will undoubtedly see them pushing their boats that much harder. We at SAIL can hardly wait to see what happens! For details, visit ocsport.com.