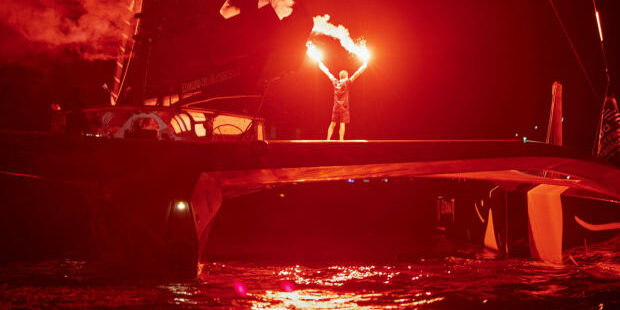 The 2022 Route du Rhum was a highly anticipated event in the ocean racing calendar, but few could have predicted exactly how challenging, dramatic, and tragic it would ultimately prove.

French yachtsman Charles Caudrelier took home gold aboard the Ultim maxi trimaran Maxi Edmond de Rothschild after six days, 19 hours, and 47 minutes at sea, breaking the previous race record by over 18 hours. “This is a race that means a lot to me,” said Caudrelier. “Three years ago, when I was told I would take part as skipper I was thrilled. Winning the Rhum aboard a multihull is a great moment for a sailor.” Second place went to Francois Gabart (SVR-Lazartigue), and Thomas Coville (SODEBO Ultim 3) rounded out the podium.

Sadly, Caudrelier’s record-smashing finish wasn’t all celebration. While he was coming into the harbor, a powerboat meant to welcome him capsized with 11 people onboard, resulting in the deaths of two passengers. Both were members of OC Sport Pen Duick, but further details have not been released at press time. The race organization stated on social media that they were “an organization in mourning.”

From the onset this edition has been riddled with drama, with the start being postponed several days due to extreme weather conditions. Once competitors got underway (most of them, anyway; a handful of boats didn’t even make the start resulting in an additional four-hour penalty) it didn’t take long for the retirements to begin. At press time, 16 boats have ended their race including Kojiro Shiraishi (DMG MORI Global One) who collided with fellow IMOCA 60 sailor Oliver Heer (Oliver Heer Ocean Racing) shortly into the race.

Also in the IMOCA 60 fleet, Fabrice Amedeo (Nexans-Art&Fenêtres) suffered an even more dramatic break down, with his ballast exploding after being battered by rough waves. Hundreds of liters of water rushed in and fried the electronics. He attempted to bring the boat to Cascais, but about 10 hours into the diversion, the boat filled with smoke, likely from the damaged electronics. Amedeo reported that the spray hitting the boat was sizzling, “like the sound of water hitting a sauce pan.” The boat was soon engulfed in flames, and within 30 minutes had sunk. Amedeo managed to evacuate to his liferaft, which had also taken on water. “Every 30 minutes, to preserve the batteries, I make a Mayday call on the VHF. A few minutes later a voice answers me,” he later reported. The freighter M/V Maersk Brida diverted to rescue him. “I’m reassured but don’t see how I’m going to board such a giant with this sea. I’m in constant contact on the VHF with the captain who can’t see me: the sea is big, and the sun is on the water, and I’m a tiny orange dot. He told me later ‘you are alive because you told me: I am approximately 2 miles from your starboard side.’” He has been safely recovered and reported that this misadventure in no way diminished his passion for his job and for the ocean.

With a new record, 16 abandonments, and all the other challenges logged, it’s easy to forget there’s still lots of race left for the majority of competitors. While the Ultim class is finishing, the remainder of the fleets are roughly a third of the way through.

For the current standings, race tracker, and more information on the race, visit routedurhum.com/en