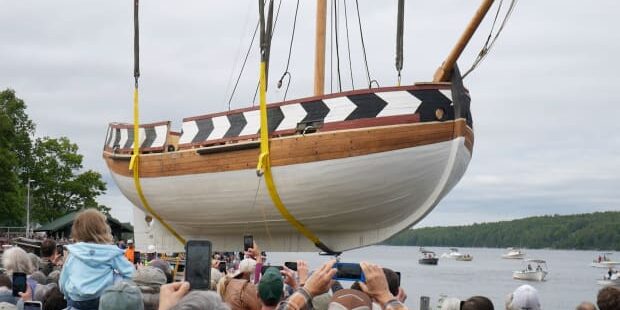 Thousands gathered in Bath, Maine over the weekend to see the replica Virginia hit the water for the first time. The tall ship, which is expected to be fully operational by next year, was built almost entirely by volunteers over the course of 25 years. It is an estimation of what the first European-deigned tall ship built in the Americas by the people of the Popham Colony would have looked like.

Preceding the launch, the town came out to celebrate with a street fair that stretched the length of Bath’s Commercial Street and Waterfront Park along the Kennebec, featuring re-enactors, food vendors and local artists. The crowds then consolidated around the Bath Freight Shed where the organization Maine’s First Ship is based. The Virginia had been moved to the bank of the river, cradled and ready to hoist into the water. After remarks from a number of the project’s principals, the ship was blessed and christened around 1700. Then it was hoisted and eased in, to fervent cheering and applause.

Once in the water, the Virginia was towed to the dock, where her bilge pumps seemed to be getting a workout. However, David Bellows of the Virginia‘s volunteer corps says that for wooden ships built in the old tradition, this is completely normal. The wood needs to expand to become watertight, and it takes a few days for this to happen. All was well.

The crowds, which were estimated at 3,000 people, lined the shore in both directions as far as was visible and included many retirees who’d worked on the project over the years, families with children, and non-boaters alike. One spectator told me sailboats weren’t really his style, but local businesses had come out in support of the project and encouraged the town and surrounding area to come celebrate. Another said he’d driven two and a half hours from Boston to be there for the event. There was an air of wonder in the audience—there’s just something about tall ships that draws people in.

So, what’s next for Maine’s First Ship and the Virginia? More work on the Virginia, actually. This summer will be spent securing the mast and sprit, completing the watertight bulkheads and installing the rigging and its hardware, among other projects. CEO of Maine’s First Ship Orman Himes tells me they expect to have it sailable by next summer, after which they can start using it for educational programing.