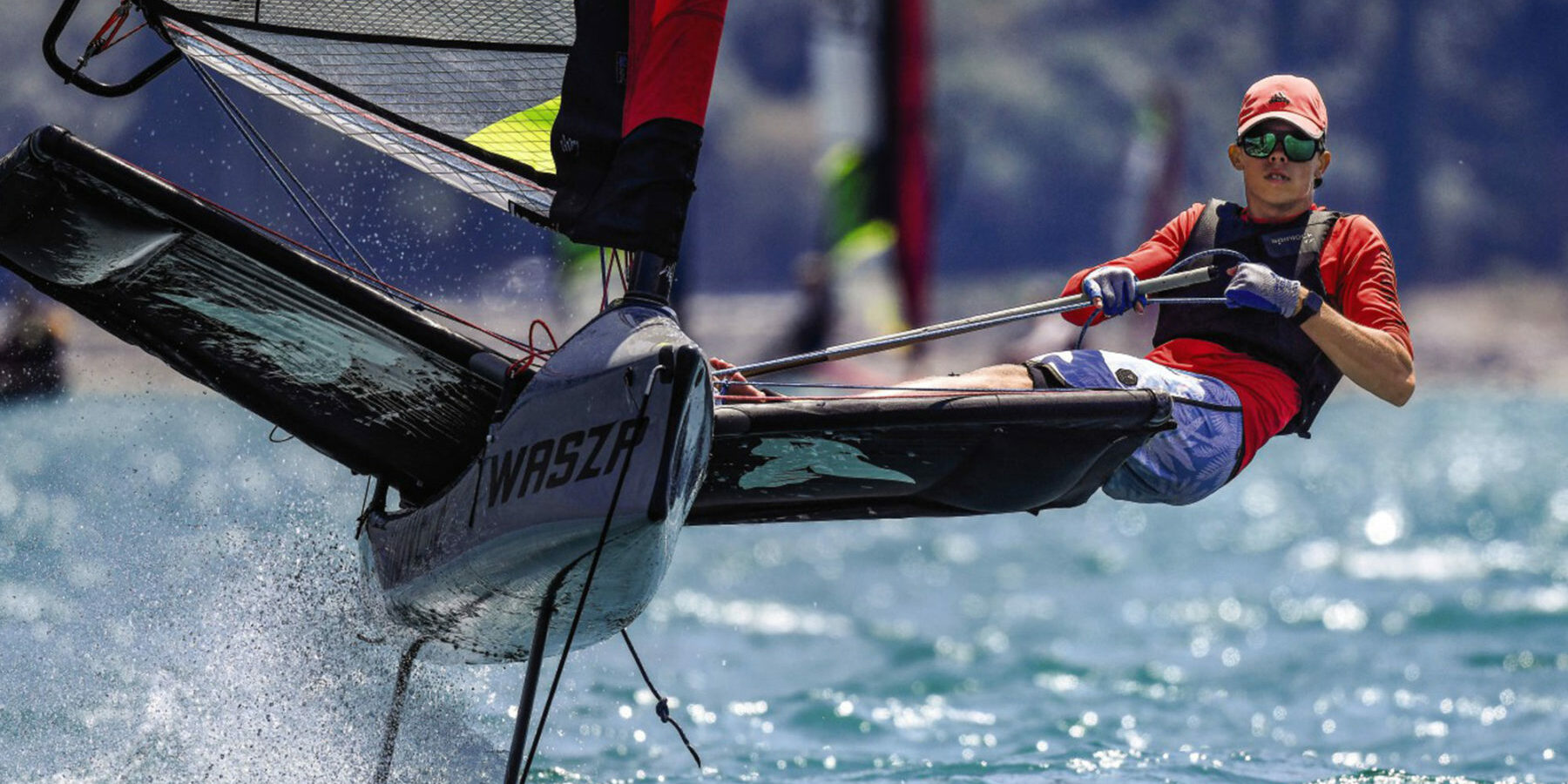 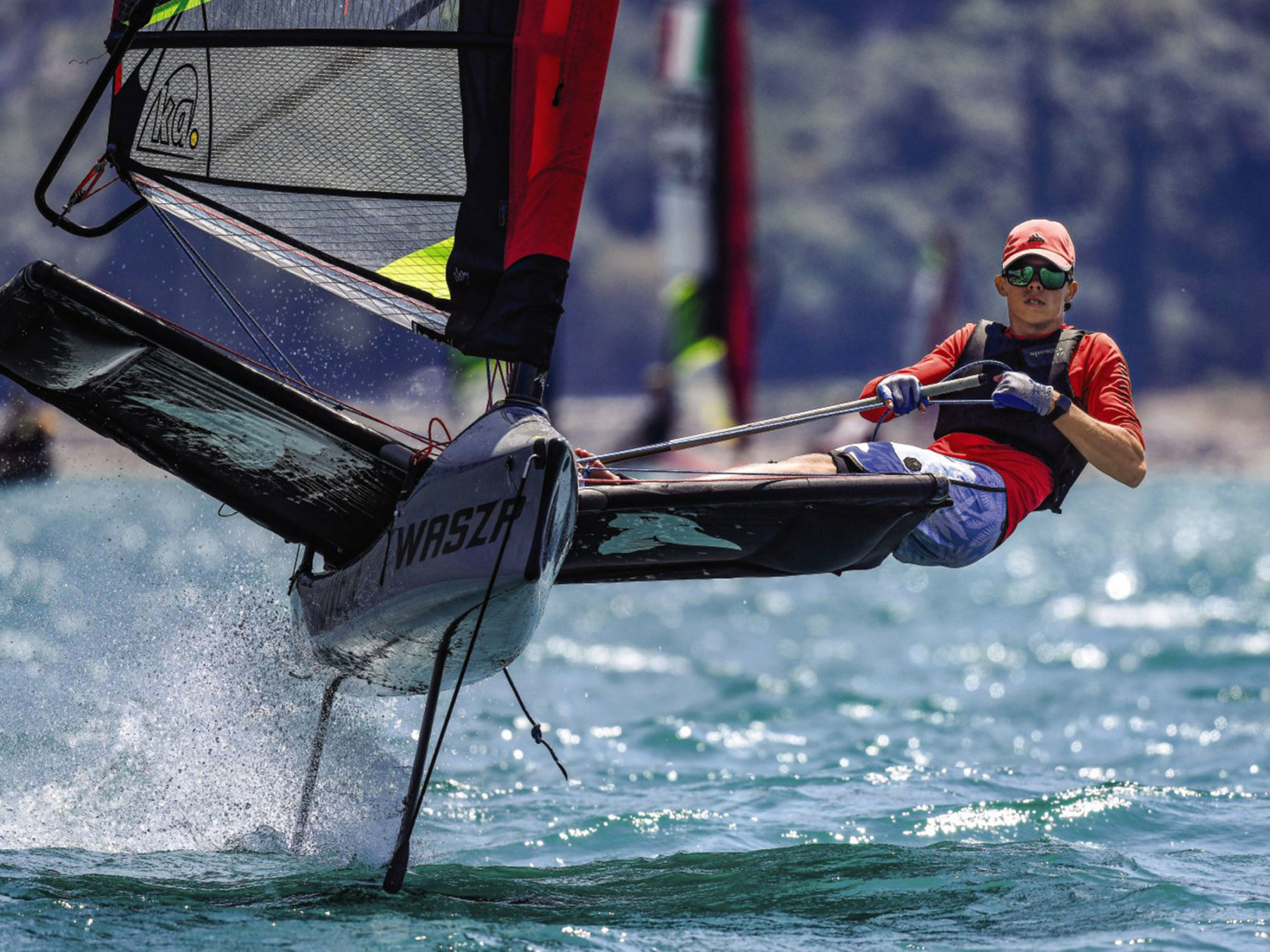 The author takes his foiling skills to new heights at the Waszp Games on Lake Garda, where 160 like-minded foilers assembled this summer for the Games and World Championship. James Tomlinson

Garda is sailing’s amphitheater, a place with a sailing culture unlike any other. Centrally located in Europe and with clinical conditions, it is also the heartbeat of international wind sports. In the cradle of the Italian Alps, it is completely normal to run across boats from Italy, Germany, Switzerland, Austria and everywhere else. With a whistling northerly Pelér in the morning and a warm Ora southerly in the afternoon, Garda is blessed with two distinct world-class sailing conditions for much of the year. And the scenery is the most stunning of any sailing venue. All of this is to say there really is no finer place for one-design sailors, wingers, kiters and foilers to play, which is why Waszp sailors gather once a year for Foiling Week, and this year the official Waszp Games and World Championship.

While Garda is known for being a near-perfect spot and easily accessible to those in Europe, getting there from Hawaii is anything but a straight shot. But it is worth it. To get to Garda this past July, I negotiate through four canceled flights, 10 days of delayed baggage, and a bunch of other annoying hiccups until I finally reach my final terminal in Verona, Italy.

But this time, I arrive with no bags and no gear.

No worries. I’ll figure something out. 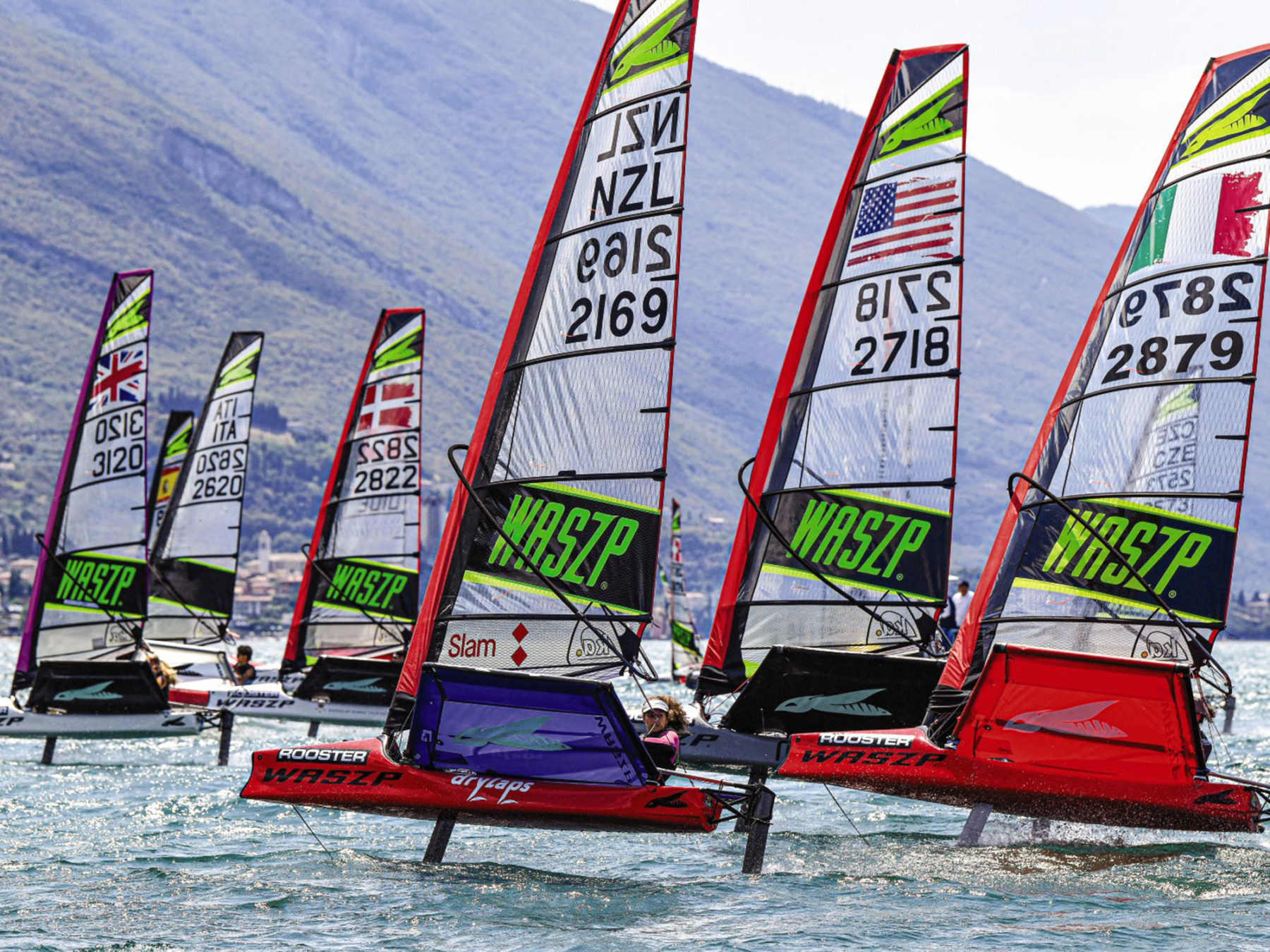 Women’s Waszp world champion Elise Beavis (to leeward of the pack) was one of 28 females at the Worlds as the class’s female contingent continues to grow. James Tomlinson

Running on four hours of sleep in 48 hours, bleary-eyed and buzzing, I hitch a ride to the yacht club in Malcesine with my coach, who is here on holiday. I find and set up my charter boat and accept that my bags might not show up for a long time. But I need to go sailing, so I plan to buy a pair of boardshorts and a life jacket using the small allowance from the airline. I also plan to check out everything Foiling Week has to offer, including its extensive collection of foiling craft. There isn’t any other event I know of where so many fleets and high-performance sailors, designers and fanatics come together to geek out on foiling.

At the club, I quickly experience the generosity of this foiling community. I, a relative stranger, am able to secure a sail and foils before the first race starts the following morning. I hit the pillow hard that night, sleep-deprived and jet-lagged.

Fortunately, sailing events in Garda have a relaxed schedule. Our briefing isn’t until midday, so I hop over to one of Garda’s many stocked sailing shops and lay down my precious euros for a pair of boardshorts and a life jacket for racing. On the water soon after my shopping spree, I can sense the jet lag. I’m not as sharp as I need to be, nor as smooth as I have to be.

For Foiling Week, the Waszp fleet is assigned to course racing. This means our races, which are normally 20 minutes everywhere else, will be more than 40 minutes long. At this point in the regatta, I’m focused on figuring out the quirks of my charter boat. In tricky and variable conditions, I move up in the standings with every race, which feels darn good at the end of the day. But for this regatta, it’s not the scores that matter to me; it’s the chance to meet new people, to train and have a good time while I’m still young. Everyone here is happy. 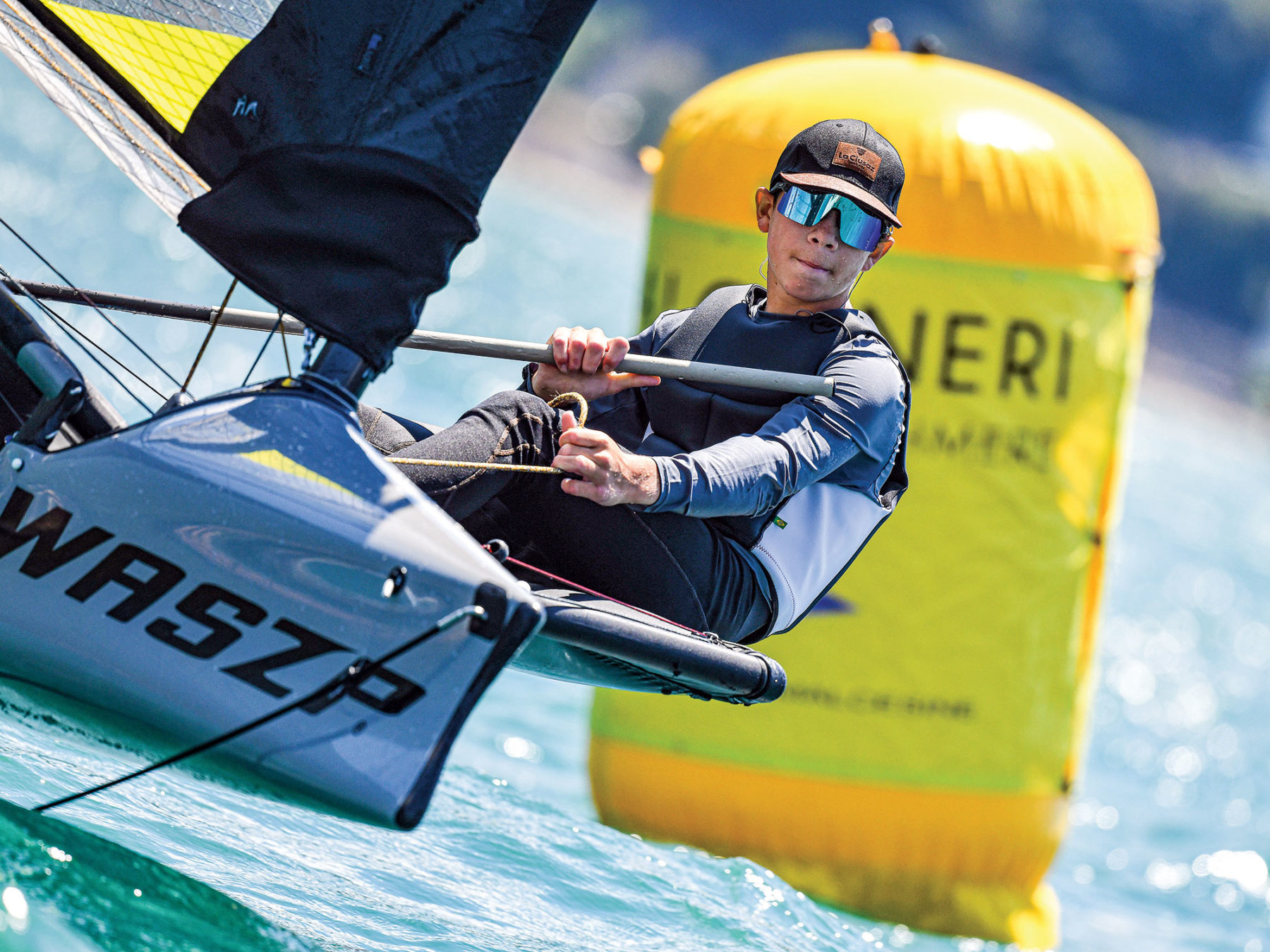 Once Foiling Week wraps up, there’s a week before the Waszp Games and World Championship officially start. While Foiling Week is a significant event with nearly 70 boats competing, this regatta has an absolutely insane number of entries: 160. Every day the boat park gets more packed as Waszps roll in on trailers and inside travel boxes, portaged by sailors from far-flung places like Australia, New Zealand and Hong Kong. This year there are 30 girls signed up to race, one of whom is New Zealander Elsie Beavis, who placed second in the pre-Worlds regatta (and would go on to win the women’s world title in Garda).

To my surprise, my bags arrive the day before the World Championship begins, so after some minor boat tweaks in the final afternoon training session, I’m on to the main event the following morning.

The Waszp Games, where all 160 sailors will be racing in well over 20 knots, is next-level stuff. The talent in the gold fleet has risen so rapidly over the past year that a winner of the last major event these days can hardly crack the top 10 at the next regatta. But there are plenty of beginners here too because new sailors can register for the green fleet, where they get coaching in tandem with the Games event happening nearby.

The first challenge of the Games is the slalom. This format is unique to the Waszp class, where groups careen down the racecourse from a reaching start, then sail downwind through a series of marks in rounds of knockout qualification, with a quarterfinal, a semifinal and a three-round final. For this insanity, Garda delivers. A clear sky and nonexistent wind in the morning get the afternoon’s Ora wind engine cranking early ahead of the noontime church bells. It comes on fast and hard, and with miles of fetch, the chop is something else. 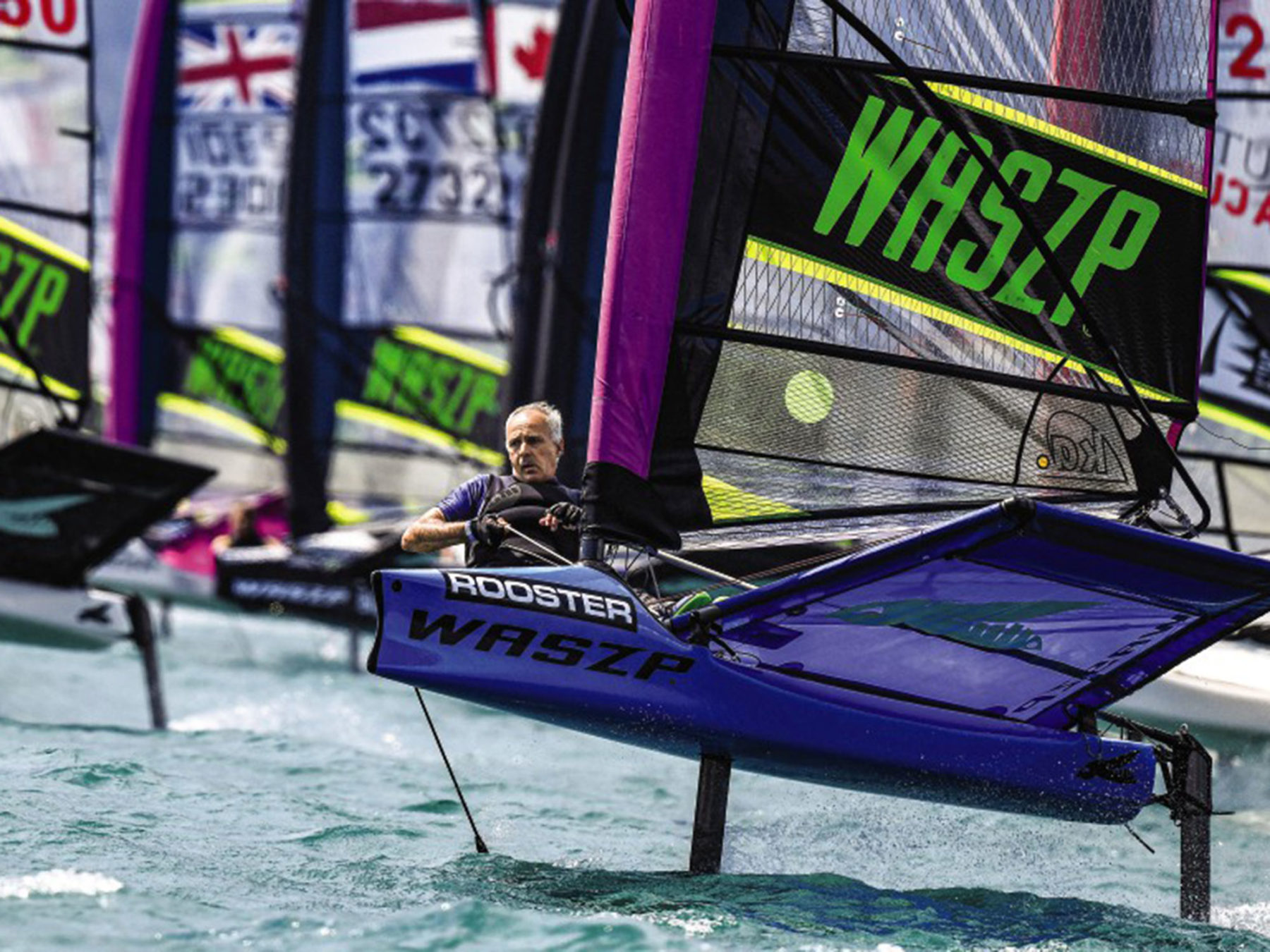 The Waszp draws sailors across age and gender groups, and the World Championship has sub-ranked ­competitors in Junior, Youth, ­Apprentice, Master and Super Master (50-plus). James Tomlinson

The perfectly flat water of the past few weeks is now gone, which leaves everyone scrambling to change settings to deal with the added challenge of battling chop. Having left the ramp immediately after the wind started to fill, my boat is set for the wrong conditions. So, as it gets windier and choppier, I’m way out of tune and struggling. With little practice in the short chop with my flat-water settings, I limp through the slalom, barely making it to the quarterfinals.

Once I’m back on shore, though, I can appreciate the spectacle of the slalom. At such a high level, the slightest mistake anywhere on the course instantaneously shuffles places. And this is what eventually happens to the slalom’s overall leader, who wins the first two races of the finals but becomes airborne on one last jibe, stacking it within throwing distance of the starting line and coughing up the title to one of his fellow countrymen.

One great practice of the Waszp class is the daily fleet debrief, led by the person who did the best for the day. Discussions include the top-of-the-line starting strategy, body movement in the chop and higher sensitivity, all of which I will attempt to apply in the course races to come.

With the slalom portion out of the way, the championship racing gets underway. To manage the insane amount of boats, organizers split the fleet into gold and blue fleets, and there’s the green fleet, which goes out with coaches to practice and hone boathandling. For the first day, I’m in the blue fleet, racing on the western side of the race area, close to the lakeside village of Lemone. This racecourse is less windy and wavier than the other course off the shore of Malcesine.

Once racing starts, it’s clear the left side of the course is significantly windier and flatter. But the wind slowly clocks to the right throughout the day, leading to large gains on the right on the later races. Some interesting discussions are brought up in the briefing after racing, and the conclusion is that the people who are doing the best are the people who are actively adjusting their ride height while foiling. Changing ride height from tack to tack allows better control in the different areas of the racecourse, allowing for minimal drag in the flatter water and higher control as chop becomes more of a factor.

On the final day of qualification, I’m somewhere in the mid-20s, well deep into the gold fleet, but there are 15 boats within 10 points. The wind is definitely lower, and I’m assigned to racecourse Alpha, off Malcesine, where the puffs are up to around 14 knots while some parts of the racecourse are below 5 knots. In these conditions, I have the best race of my event, where, with an advantage through maneuvers, I’m able to round the last upwind mark first.

My proud moment is short-lived, however. I sail into a windless hole, and the boat plummets to the water, allowing seven boats to soar past before I can get it back up and flying. I manage to get four of them back on the downwind leg, reclaiming valuable places.

Back on the Bravo course the next morning, ­conditions are similar to the previous day, except it is flatter and a bit less windy. It’s quite clear to everyone here which side of the course is best, which only makes it—and the fleet—more compressed. 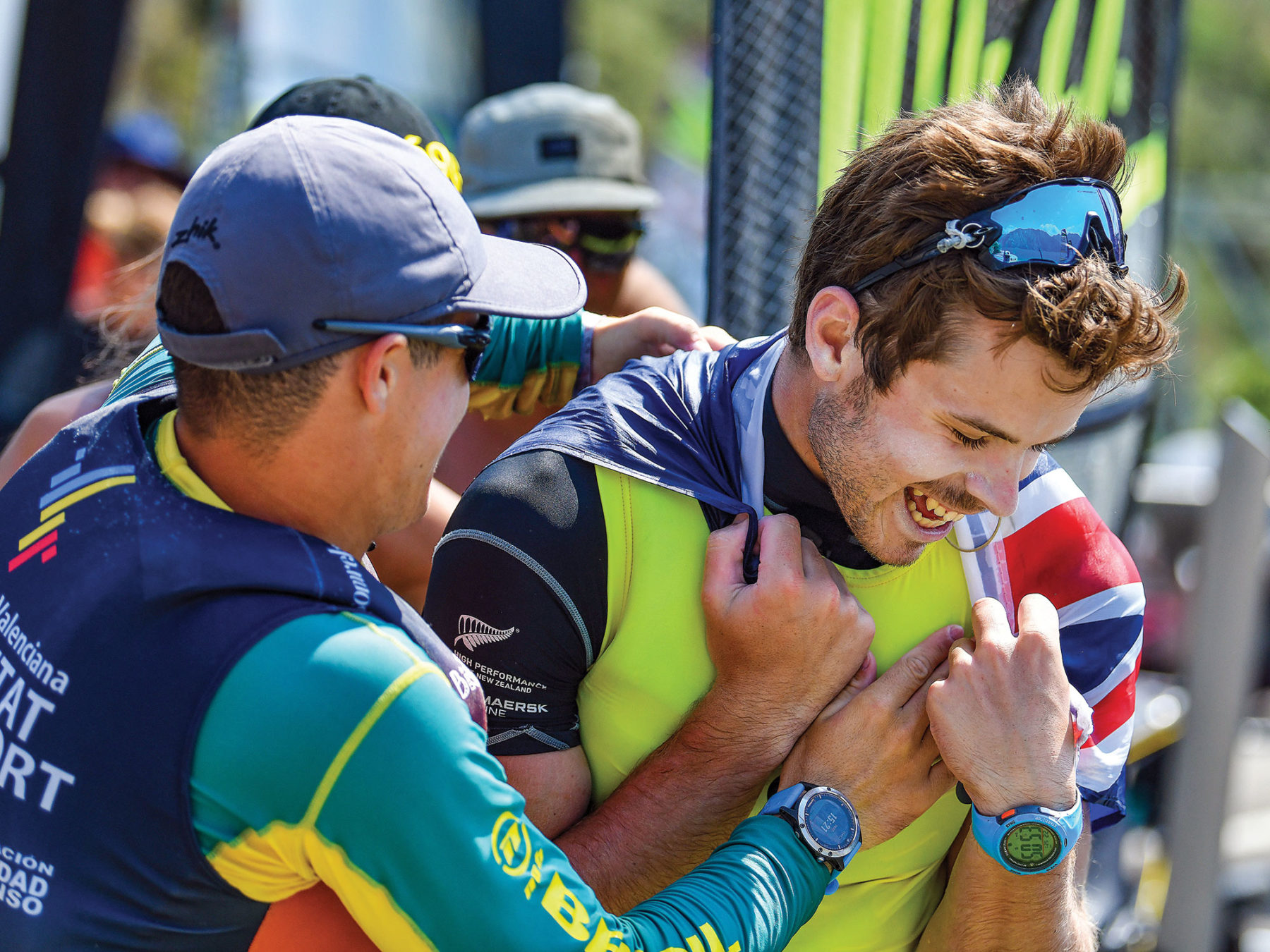 My first day in the gold fleet is… How do I say it? Fierce. The wind is up from the previous day, and the starts are so hard-fought that the first three are general recalls. Even under a black flag, the racing is elbows-out. After every start, I find myself playing catch-up, and before one race I realize I’ve forgotten to put the plug in the boat. I’m able to make it back out for the final race and feel OK with my two results for the day. But I’m annoyed by my easily preventable mistake.

The last day is the windiest of the gold fleet racing, and with a 70-boat fleet racing around at 20 knots, the sailing area is manic. Starting again on course Alpha, the strategy play is deciding between dipping into Malcesine to score a puff or attempting a bunch of tacks up the narrow band of the best wind. With each leg of the course it seems different strategies pay off indiscriminately and the fleet gets turned on its head every time. Like getting to these Games, I remind myself nothing in Waszp sailing is easy at first. But once you get it wired, everything is not only fine, but some of the best experiences possible on water.

My final standing in the championship is 32nd, which is not bad in this competitive fleet, but it’s not quite how I wanted to finish. The experience, however, leaves me with the knowledge to compete stronger in next year’s event in Sorrento. It also motivates me to advance the level of Waszp sailing at my home club and elsewhere. Because when going to a world-level competition, it’s not only racing skills that get developed, but also the connections and friendships that allow sailing to grow and expand as it does in Garda.