Winging Toward a World Title 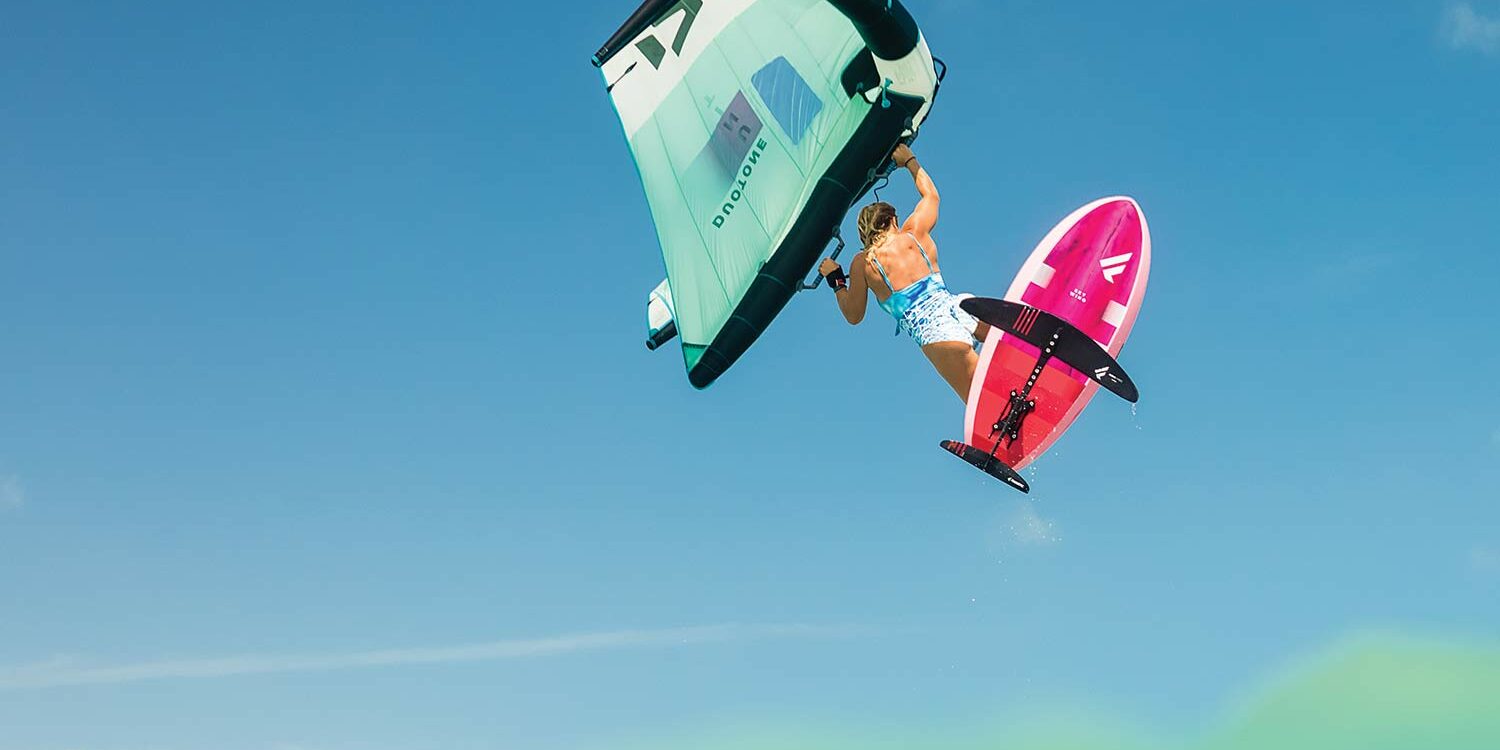 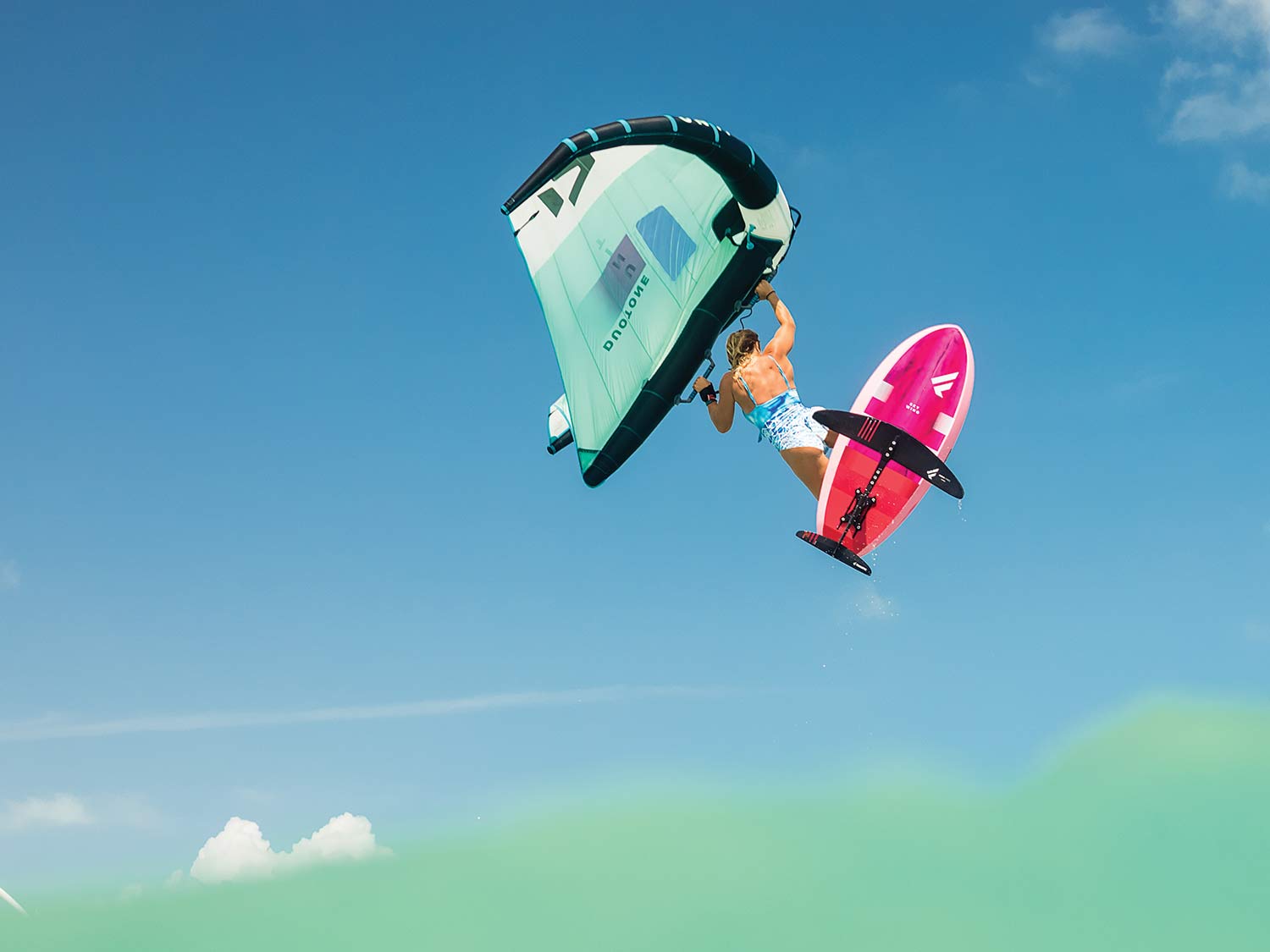 It’s a Wednesday afternoon in July, and Paula Novotná has just finished another training session, refining her skills in the “super-strong wind and nice waves” off the south coast of Rhodes, Greece. She’s on “holiday,” having just finished second in the women’s division of the Wingfoil World Tour’s European Racing Championship. For this 29-year-old professional kiteboarder-turned-wingfoiler from the Czech Republic, there’s precious little time to rest and recover, but she must. Over a hectic summer, she’s won two of three World Tour Surf-Freestyle Championships—one in Switzerland and one in the Canary Islands—and now has her heart and mind set on winning the next regatta to become the first Women’s Wingfoil Surf-Freestyle World Champion. Let that sink in for a moment. The first-ever in a sport growing faster than any other today, a sport that’s evolving and progressing faster than even she can herself.

Before shifting her focus to wingfoiling two years ago, Novotná spent 10 years traveling the globe with the Global Kitesports Association Kite World Tour as a surf-freestyle specialist. Turning the clock back much further, Novotná was a 10-year-old trekking through Europe to windy hotspots with her parents, both kiteboarders. They taught her the strings at 14; at the age of 19 and full of wanderlust, she turned pro and jumped on the tour.

Today’s focus on wing­foiling came to her by chance; she still kites plenty for fun, but when it comes to competing, the hand-held wing is giving her a new creative outlet. “After so many years of kiteboard freestyle, I was trying similar tricks and getting bored with it because it was kind of the same,” Novotná says. “I was approached by DuoTone (one of her gear sponsors, along with Fanatic) when they started making wings, and I was like, ‘What is this?’ I did it and got hooked right into it.”

She was invited to Brazil for the first wingfoil competition ever held “because there were only two girls at the time, and they needed three to make the competition happen. I did not want to go and embarrass myself, but they insisted. I went and I saw so many people winging, and that motivated me. I spent four weeks in Brazil and got much better—jumping, riding waves. And from that moment, I committed to it. Life is about change, and this has been a fun change, exploring new places that are great for wingfoiling but not for kiteboard.”

This nascent sport of high-performance hand-held wings, boards and foils is rapidly evolving from curious water play to real competition, with the current formats on the Global Wingsports Association’s World Tour being surf-freestyle, ­surf-slalom and race. Depending on the venue or the conditions, athletes like Novotná must bring a diverse skillset. If there’s waves at the location, the focus is on wave riding and tricks, much like surfing. “We can ride three or four waves in the duration of 15- or 20-minute heats,” she says. “If the venue is flat or choppy water, we focus on freestyle, where we are in the water from seven to nine minutes. We have about 12 attempts, and four tricks count.”

What the judges are ­looking for are speed into the trick, technical difficulty, height and amplitude, the quality of the landing and the innovation of the trick. “If you have a ­little butt check (in the GWA’s 86-page rulebook as ‘Wet Landing’) or unstable landing, the points go down a lot,” she says, “so all the tricks we have to do consistently.”

The other discipline, similar to Olympic kiteboarding racing, is race, which focuses on windward/leeward course racing, speed, turns, tactics and foil development. Novotná is still feeling her way into this discipline, enjoying the high speeds and the challenge, but her experience as a trickster with kites has given her a head start as a pioneer of sorts in the surf-­freestyle discipline. It’s her jam.

She knows, however, that her best shot at the world title is now. “The sport is so new, and the tricks are coming very fast because of the young-­generation kids coming into the competitions now,” she says. “Every competition we have, the level rises a lot—it’s insane.”

Her male counterparts, especially, are pushing tricks into mind-blowing status. “They are already doing front flips and backflips and double flips and loops,” Novotná says. “When I look at the guys, I see there are so many tricks I had no idea existed, so now I have two months to train harder for the next competition. I have to win the next one because there are so many young girls coming into the sport, and even though I’m learning very fast, there are many girls that are learning faster.”

At the moment, her challenge is sticking the landing on her backflip, which is difficult because the wing and board must flow through the rotation, and the “pop” has to be just right. “I find it easier than kiteboarding when it comes to the tricks,” she says. “It does look hard, but also I’m a little scared of the foil—this knife that I’m jumping with. For some people, it can be very scary, but it’s not that bad because [the foil] is always behind you.”

Ahead of each competition, Novotná focuses on perfecting six or seven tricks that she knows she can do in most conditions. Repetition and video analysis are important, but so too is taking the right equipment into the water. There are many different foil types, shapes and sizes, which is true of the boards as well. With a larger, high-­volume board, tricks are easier to land. With a smaller board, Novotná can fly higher, but the landings are more difficult. Then, of course, there’s wing choice, which can range from 2 to 7 meters in span. “You have to choose the right-size equipment,” she says, “but it is the experience of competing that helps you win as well.” 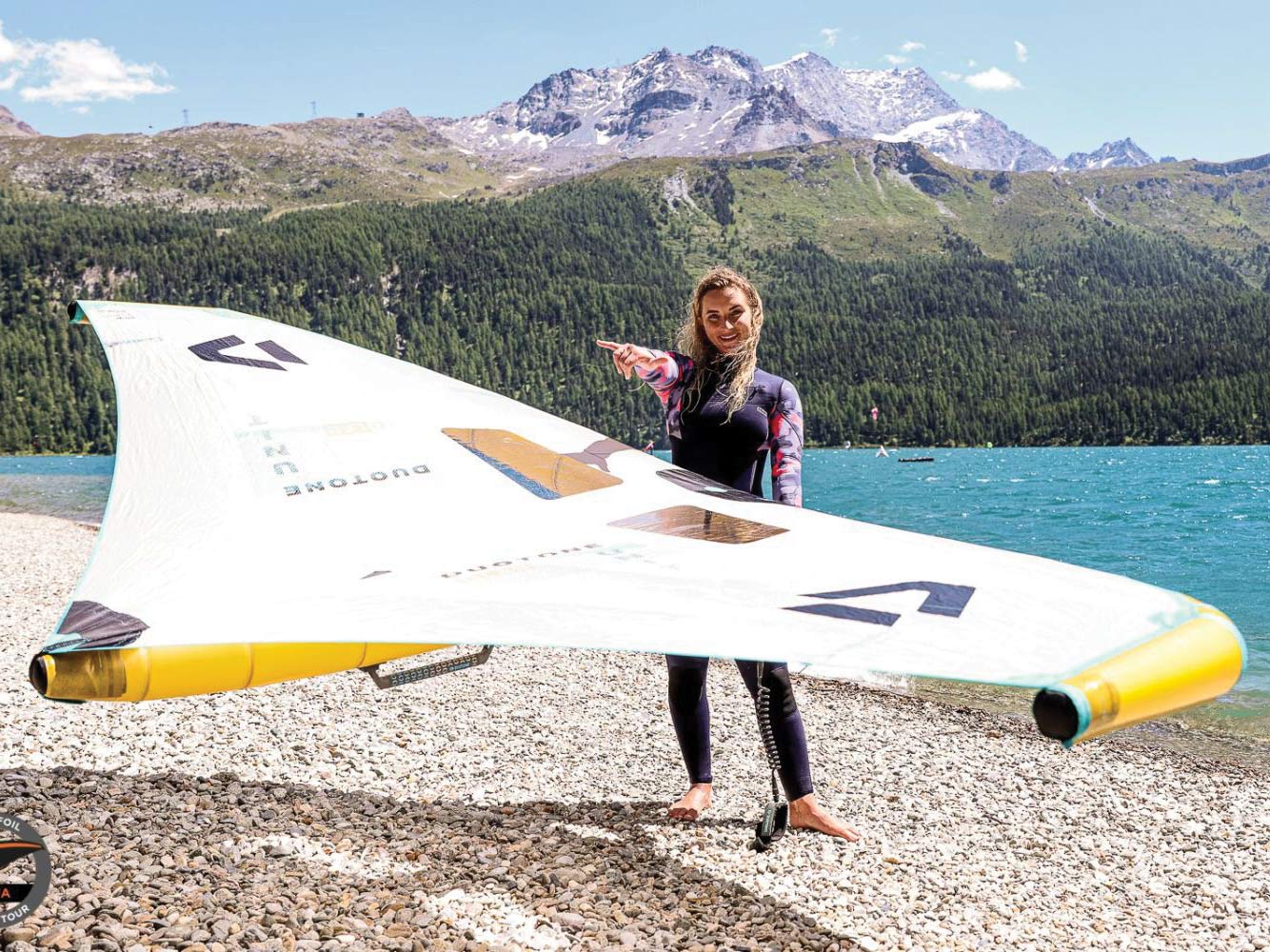 Novotná’s observations of the past year are that while kiteboarding continues to grow in popularity—so much so that equipment manufacturers can’t keep up with demand or developments—there is a concurrent explosion in wingers too.

“It’s amazing, the growing number of wings on the water,” she says. “A lot of people want to wing, but there’s not a lot of new equipment available. The wing-race discipline is especially cool for the audience because we are holding the sail. I hope it becomes [an] Olympic [sport] because it is attractive, and we can wing in quite light wind.”

While the travel and destinations are certainly amazing, and the lifestyle even more so, there’s much more to it than the glamour portrayed on Novotná’s social media channels. (To date, she has 148,000 followers on Instagram.) For every hour in the water, there’s two in the gym and creating social content, and as a sponsored athlete, the content demands are significant.

“I have managed to pay my travels and live this life for 10 years,” Novotná says. “What helped me is that I was lucky that back in the day, North Kiteboarding called me when I was 19. When I got my first podium, I got on the international team and basically got independent from my family, and I could finance my travels. But our sport is not so big that we can just do it, get results and live from it. What sponsors are looking for is marketing and social media exposure. Whoever wants to become pro kite- or wingfoiler has to know that you have to be very good in the sport, but you also have to manage your media and be seen online because that’s what sponsors are looking for. It’s a full-time job.”

For those keen to try ­wingfoiling, Novotná suggests going straight to school. Her location of choice is Cabarete, on the north shore of the Dominican Republic, which has become her second home. The wind is good from January to August, and the reef not far off the beach serves up slow-­breaking waves, which are ideal for wingfoiling, carving and jumps.

“The reason I recommend taking a lesson at a school is because [it has] the equipment you need. You need quite a big board with a lot of volume. Your first lesson, even on a [stand-up paddleboard] with the wing is to get used to it. It’s best to start [with a board that’s] around 160 liters; something above your weight so you can learn to handle the board. When you start to learn, it’s better to have a bigger wing because you will manage to get up easier, and you will learn how to pump the wing and pump the foil to get flying. Once you’re up, you can be up for a long time.”

When you’re ready to buy your own equipment, she adds, get a board that’s equal to or slightly heavier than your body weight—maybe a bit more. Novotná’s competition board is 60 liters, and her preferred board for doing high jumps and learning tricks is 45 liters. Curved foils, she adds, are better for riding waves, while straighter, high-aspect foils are best for tricks. Racing foils require a different discussion, keeping in mind that it’s all about speed and high-velocity turns.

And speaking of turns, next on Novotná’s passport is the Republic of Mauritius, where she will post up for four months to train. The island has all she needs to prepare herself for the world title: There’s a break called “One Eye” that’s a legendary gem for kitesurfing, and another break nearby that churns out big but slow-grinding waves that are perfect for wingfoil surfing. More importantly, there is a massive lagoon to practice her freestyle tricks in both sports, where one can be sure there will be flips and loops added to her routine.

The post Winging Toward a World Title appeared first on Sailing World.