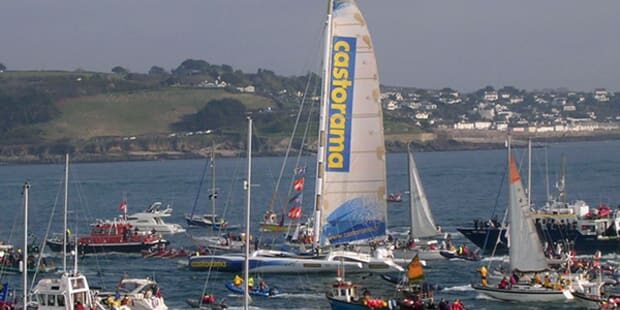 Dame Ellen MacArthur was born July 8, 1976 in Derbyshire, England. She grew up sailing with her aunt on the eastern coast of England. At age eight, she saved her lunch money to buy an eight-foot dinghy.

At 17, she began working at the David King Nautical School in Kingston upon Hull. A year later she bought a Corribee and named it Iduna, in which she sailed a circumnavigation of Great Britain. Two years later, she finished the Mini Transat in a 21 ft Classe Mini named Le Poisson which she outfitted herself while living in a French boatyard. In 1998, at the age of 22, MacArthur was named “Yachtsman of the Year” by the British Telecom and Royal Yachting Association and Sailing’s Young Hope in France.

Perhaps her most famous achievement, however, is racing in the 2000-01 Vendée Globe, where she came in second place as the youngest competitor to complete the voyage. To this day, she remains the highest scoring woman in race history. Soon after she was named a Member of the Order of the British Empire for services to sport.

At 27 she created the Ellen MacArthur Cancer Trust, created to bring sailing to young cancer patients and encourage their confidence after cancer treatment. During this time, she also captained an attempt at the round the world record on a catamaran called Kingfisher 2. The boat had to retire from the attempt after its mast broke in the Southern Ocean. After this attempt, a trimaran named B&Q/Castorama was built, being unveiled in January of 2004. The boat was specially built, making accommodations for her 5’2 frame. It was in this boat that she made her attempt at the west-east transatlantic crossing time, which lasted just over seven days but failed to beat the record by about an hour and 15 minutes.

On November 28, 2004, MacArthur began her attempt at the solo record for nonstop sailing round the globe. During this campaign she set the record for fastest solo voyage to the equator, past the Cape of Good Hope, past Cape Horn and back to the equator again. On February 7, 2005, MacArthur set the new solo non-stop circumnavigation record at 71 days, 14 hours, 18 minutes and 33 seconds, just over one day and 8.5 hours faster than the record before hers. She was 28 at the time.

After her achievement, she was made a Dame Commander of the Order of the British Empire, as well as being granted the rank of Honorary Lieutenant Commander, Royal Naval Reserve.

In 2007 she created Team Ellen, a three-person team with a three-year timeline aimed at competing in a number of IMOCA Ocean Racing events. In October of 2009, MacArthur announced she would be retiring from competitive sailing. The next year she founded the Ellen MacArthur Foundation, which promotes efforts aimed at refining traditional models of economic production and consumption. Macarthur supports the creation of a circular economy, where items are created to have multiple life cycles instead of being disposed of after one use.

March is Women’s History Month, and throughout we’re sharing the stories of influential female sailors of the 20th Century. From racers to cruisers to merchant sailors, these women took to the seas in search of adventure and purpose. Their contributions broke barriers and shaped modern sailing.