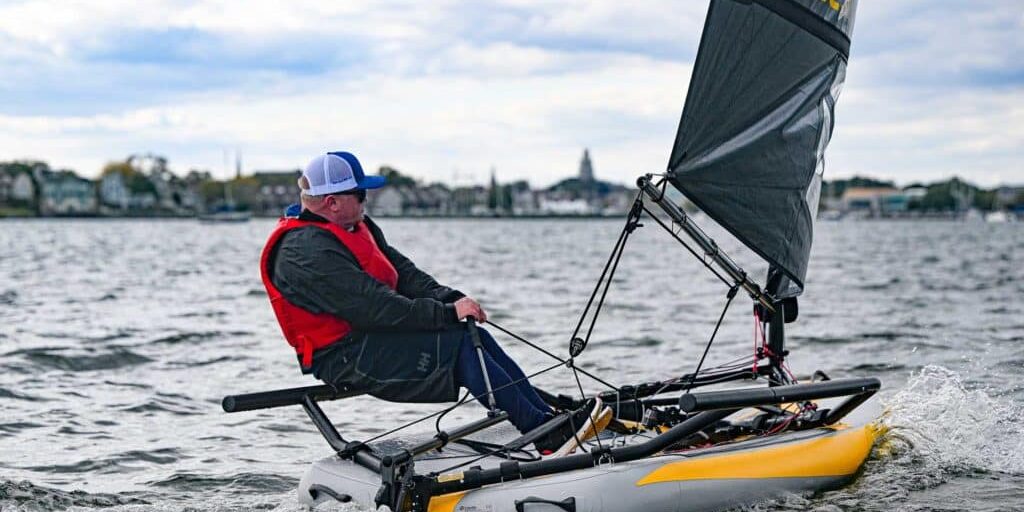 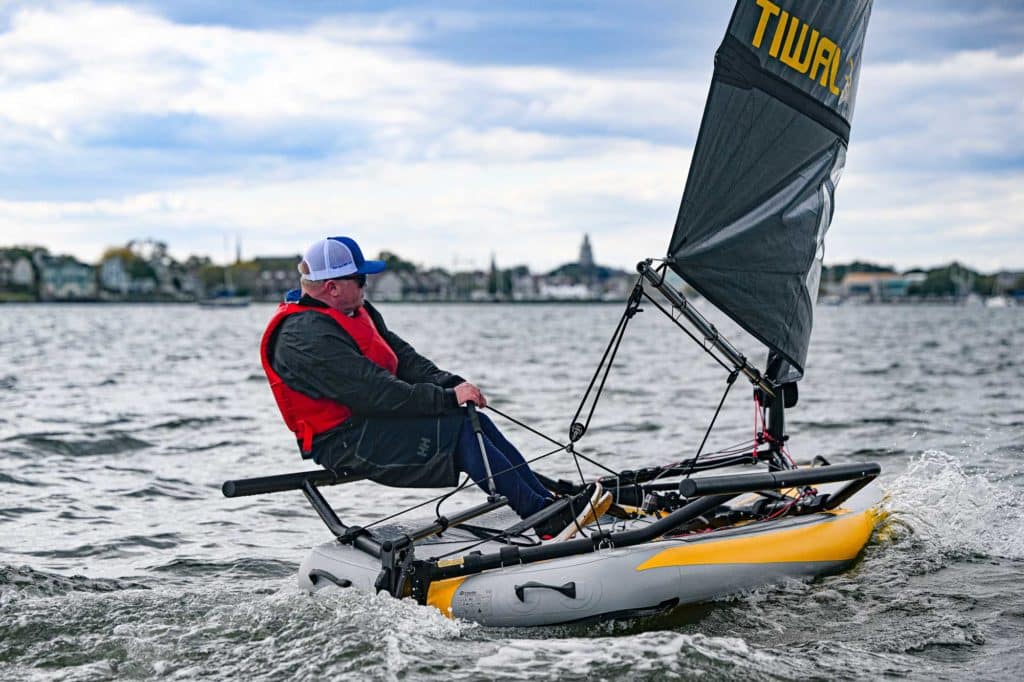 BOTY judge Chuck Allen reported that the Tiwal 3R was plenty quick upwind and downwind, and as improvement over previous models, he says, the 3R was drier boat. Walter Cooper

The surest way to grow sailing is to make it easy to get on the water with minimal hassle on a boat that is exhilarating to sail—and that’s exactly what the inflatable and ­powered-up Tiwal 3R does. Thousands of Tiwal fanatics around the world can’t be wrong; they love their zippy little crafts, and the Tiwal community has grown ever larger since its young French innovators launched the first model a decade ago. The Tiwal 3R is the continuing evolution of a great idea—with even better execution. Tiwal boats keep getting better, and this one is its best yet.

The “R” is for Race, and that’s because after two years of playing and adventure racing on the early-edition Tiwal 3s, keener owners started asking for more. But the engineering required to make Tiwal’s high-pressure inflatable hull and aluminum frame take on greater rig and structural loads that had them stumped for nearly two years, says Emmanuel Bertrand. They kept breaking it until they got it right.

At 10 feet and 121 pounds fully rigged, the magic of the Tiwal 3R is its portability, which would explain why the company says it sells so many in urban areas around the world. The sail, hull, blades, five-part composite spar and boom, and aluminum frame pack into two 5-foot duffel bags. To put it all together at whatever water’s edge takes about 30 minutes; it’s mere minutes if the boat is coming off the car top already pumped and assembled. 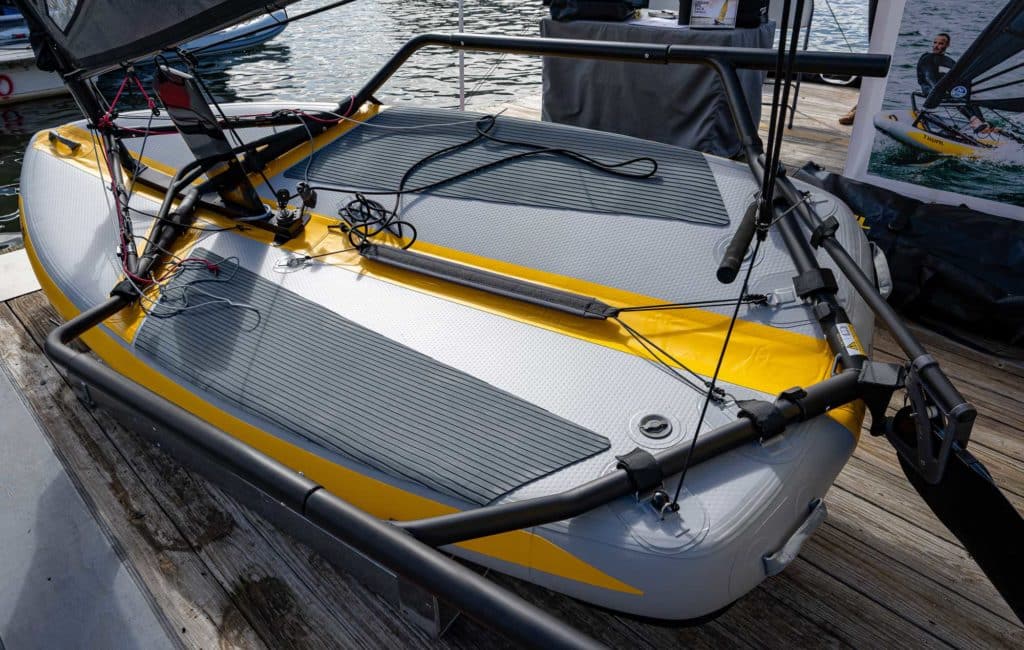 Tiwal reps reported that the 3R can be set up from its bags to sailing in about 30 minutes, and half that if it’s already inflated and the aluminum frame installed. Walter Cooper

The PVC hull construction is identical to all other Tiwals, but the design for the 3R is a big improvement, with a more pronounced V-shape, a bit more rocker, and a reinforcement plate on the bottom near the transom, which gives it stiffness and a cleaner exit. “It’s difficult to get a hard corner on inflatables,” Stewart says, “so that’s a great solution to give it a nice sharp edge and a cleaner break so the water isn’t bubbling up over the back.”

When I got my weight in the right spot, the boat just took off. It’s quicker than quick.

The gust-responsive rig and big sail, built with North Sails racing cloth, is what takes the boat a big step from the recreational sailor’s Tiwal 3 to the racing sailor’s 3R, Powlison says. “This is the same size sail as a Laser, 77 square feet, which is a lot of power. When you get the vang set right, it does make a big difference. It is an effective control that they got right.”

Powlison’s only desire was to be able to get the sail controls to run farther back on the rack, accepting, however, that this would unnecessarily complicate the setup. 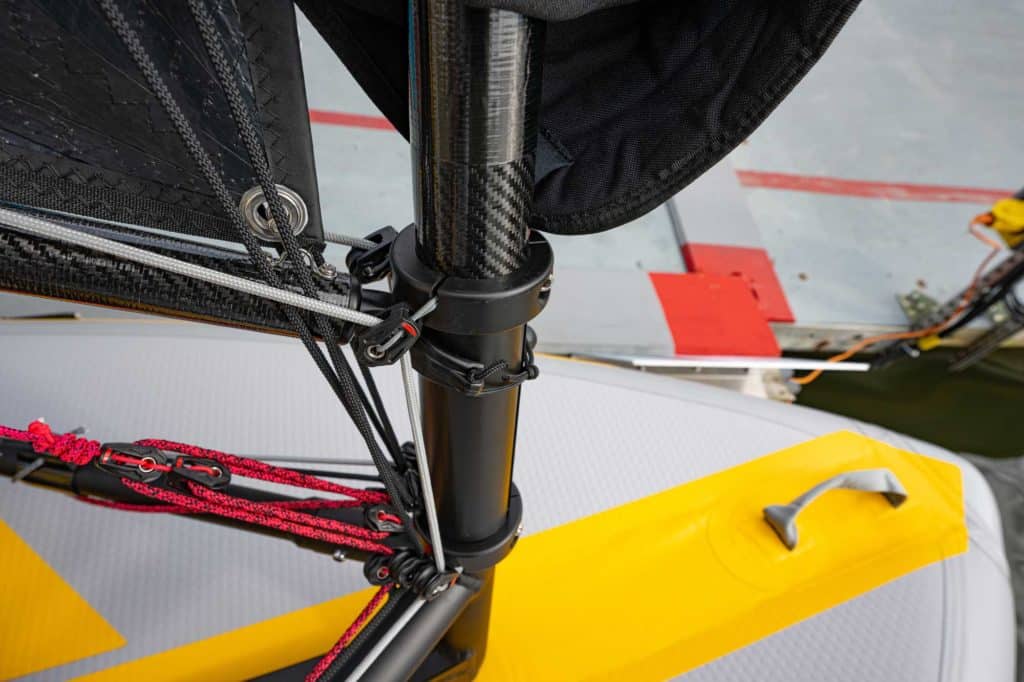 The highly-engineered mast-color system on the Tiwal 3R allows the vang and cunningham systems to be double-ended and very effective at controlling the 77-square foot mainsail’s shape. Walter Cooper

Allen, who’s been a Tiwal fan since the original, is impressed once again. “You definitely get a lot more performance out of this thing,” he says after sailing the boat in 10 to 15 knots and flat water. “I got hit with a puff and was like, dang! This thing’s got some wheels. It’s much faster and stiffer. I’m 170 pounds and was able to stay out on the rack the entire time, even when it got light.”

Stewart’s assessment of the 3R is that it’s built for a slightly more advanced sailor. “This thing is higher tech, with a lot more control lines, so it’s a bit more boat to handle. That being said, I’m a big guy (the manufacturer’s stated maximum load on the wing is 242 pounds), and I was never sitting in water, so it will accommodate a wide range of people.” 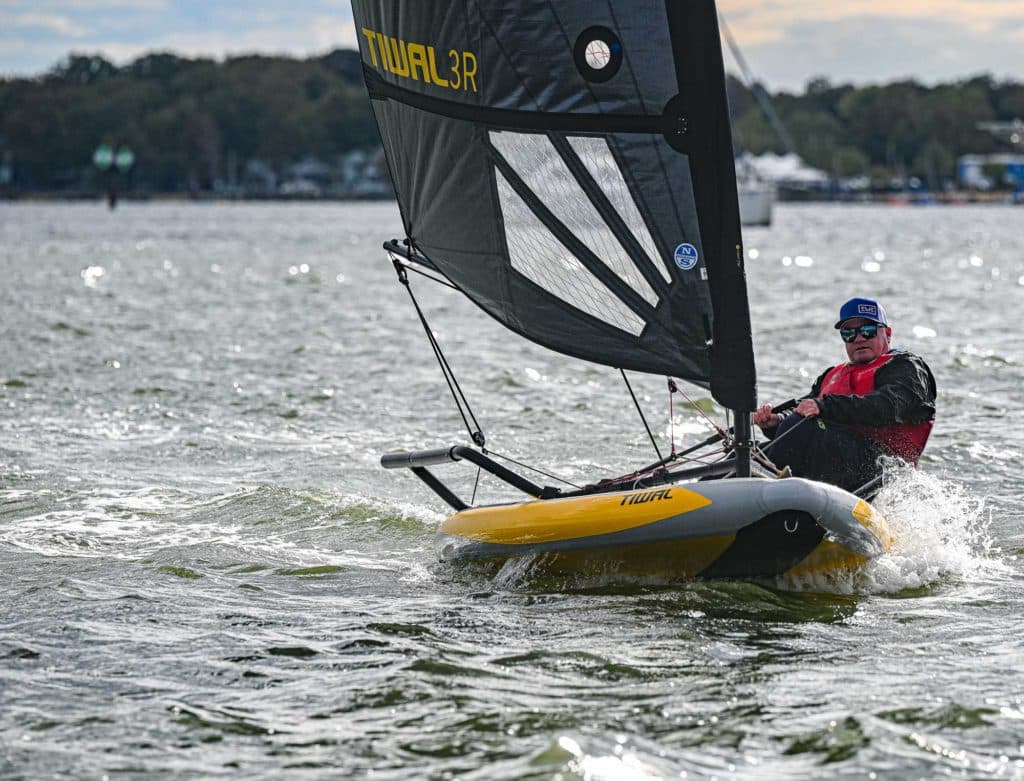 BOTY judge Chuck Allen puts the Tiwal 3R to the reaching test, which ends with two thumbs up. Walter Cooper

Getting the purchase systems for the 4-to-1 cunningham and the two-part vang (all of which are doubled-ended) into the mast collar hardware was an engineering exercise, says creator Marion Excoffon. But the end result is a system of color-coded lines and color-matched Harken blocks that work effectively and smoothly to depower the sail. Once the control systems are assembled, they don’t need to be rerun. When rigging, simply slide the mast into the collar, hook up the mainsheet, attach the rudder, and cast off for a fast and sporty adventure.

“Every time I got a little puff, the boat zipped right along,” Allen says. “The foils are stiff and shaped well, so the boat goes upwind really nicely. The bow was stiff and wasn’t flopping in the chop. But the best part was reaching around in the big puffs, sitting at the back corner of the rack, with the boat just skimming. When I got my weight in the right spot, the boat just took off. It’s quicker than quick.”