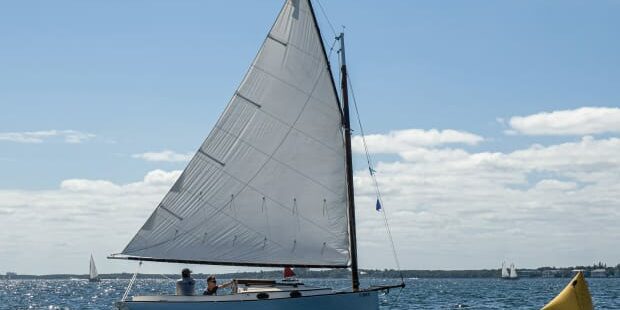 It’s something all sailors dread—seeing the floorboards in the cabin sole afloat—and it’s what I saw on my way back from a sail across Biscayne Bay. Since I was on my own, I immediately let Betty Jane, my 1982 Mystic 20 Catboat, round up into the wind and went below to turn on the bilge pump. For some reason, the automatic float switch had stopped working. I also got out the manual bilge pump and pumped away. Luckily, it wasn’t a massive leak, and a few minutes later the bilge was dry.

In hindsight, I think the excess water in the bilge was due to my running before the wind for the past hour averaging 5 to 7 knots—not too shabby for a 40-year-old catboat! I think the pressure from the following waves in the 15 to 20-knot breeze had pushed a fair bit of it up the bilge pump’s anti-siphon loop and may have also pushed a little in through the propeller shaft stuffing box. A few days later, I replaced the faulty float switch and tightened up the stuffing box nuts. I haven’t had a problem since.

That was an exciting way to end a sailing trip from Coconut Grove over to Key Biscayne, spending the night on the hook in Bill Baggs State Park and then sailing back the next day. I had been planning the trip for a few weeks and decided to leave early on a Tuesday morning despite the forecast, which called for the aforementioned gusty winds. Twenty knots is a pretty strong breeze for just Betty Jane, her 282ftt2 of gaff-rigged mainsail and me.

Setting out, the wind was blowing out of the east-northeast, and I decided to sail close-hauled on a port tack in a generally southeasterly direction for a couple of miles. After that, I tacked onto starboard and headed across the bay. This made for fun, but strenuous sailing, as I had the tiller in one hand and the mainsheet in the other hand—easing it out in the puffs, sheeting in during the lulls. A good upper body workout! In the lee of Key Biscayne, the wind moderated, and the waves grew less troublesome. I tacked again and sailed close along shore enjoying the view of the nearby houses.

Since I had a few more hours of daylight left, I decided to continue on and sail over to “Stiltsville,” a well-known collection of old houses built on stilts set into a shallow bank a mile or so south of Key Biscayne. This is when having a centerboarder comes in handy. Hauling the board up I had no trouble sailing in among this unique set of structures with Betty Jane’s 2ft draft.

From there I sailed on through the pass between Key Biscayne and Stiltsville so that Betty Jane and I could briefly dip our toes in the open Atlantic before coming about and heading back into the bay for the evening. As we did so, a pod of dolphins swam alongside, keeping an eye on our progress.

There is a small harbor on the bay side of Bill Baggs State Park at the southern end of Key Biscayne that has a seawall for use during the day and a small area for anchoring at night. It is called “no name harbor” (some irony there) and is quite popular with local mariners, sail and otherwise, as well as with those making a stopover in the area after having cruised from distant shores.

Arriving in the harbor, I tied up alongside the seawall and had a nice walk around the park. The Waterspeed app on my phone indicated I had covered 13.72 nautical miles that day in just over four hours with an average speed of 2.9 knots and a top speed of 7.0 knots. Again, not bad for a well-worn catboat!

With Betty Jane secure, I met my wife for dinner at the park restaurant, after which she drove home, and I motored back out to the center of the harbor and dropped anchor. Sitting there in the cockpit watching the sun set and the moon rise was quite nice. As an added bonus, another pod of dolphins paid us a visit, making their rounds through the harbor, followed by a handful of cruisers in their dinghies excitedly photographing them. Sleeping on board that night couldn’t have been more relaxing, with the waves lapping up against the hull and yet more dolphins exhaling nearby.

The next morning, after breakfast in the cockpit, I motored out of the harbor, raised the mainsail and set a course for Coconut Grove in the 15 to 20-knot easterly. Betty Jane’s boatspeed topped out at 7.2 knots, and we averaged of 3.7 knots over the 8.2 nautical miles back home. The excitement of all that excess water in the bilge began about a mile from my mooring at the Coconut Grove Sailing Club and convinced me to head straight in, as opposed to enjoying a longer sail on the bay. As I write this, I am already planning my next trip: a day sail over to Elliot Key, a night or two after I get there to explore, and then sail back. If you are ever on Biscayne Bay, keep a lookout for Betty Jane as she takes me on more adventures around this great and surprisingly adventurous body of water.

The Skinny on Biscayne Bay

Sailing on Biscayne Bay is relatively easy, with the locals saying it has ocean winds and lake waves. The bay is about 20 miles long and 7 miles wide, with a line of barrier islands protecting most of it from the nearby Atlantic. It is a shallow body of water, with average depths of around seven to 10 feet. A local joke has it that if the wind dies you can always just get out and walk home. The northern end of the bay is quite developed, with Miami, Coconut Grove, Virginia Key and Key Biscayne. By contrast, the southern end of the bay is quieter and less developed with the eastern barrier island (Elliot Key) uninhabited. Elliot key and the surrounding waters are protected by Biscayne National Park, and there are plenty of marinas around the bay, so services are never far away. Being so close to Miami, the bay can get crowded on weekends, but things fall quiet again on weekdays. Navigation is generally by line of sight, and there are plenty of aids to navigation, including a twin line of day marks delineating the Intracoastal Waterway, which runs through the center of the bay from north to south.