Juneteenth on the Water 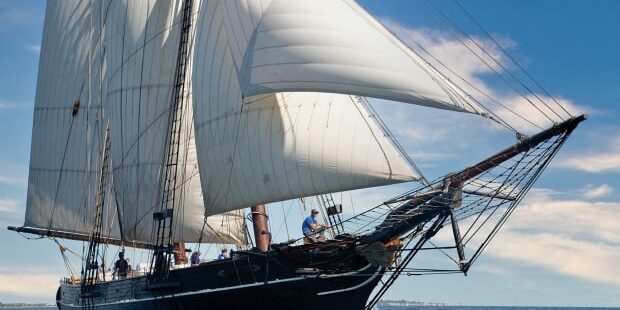 Discovering Amistad and Mystic Seaport Museum have partnered to organize their third annual Juneteenth festival, featuring concerts, speakers and a reflection on the lasting legacy of racial injustice in America. Declared a National Holiday in 2021, Juneteenth celebrates the end of slavery in the United States, commemorating the day news that the Civil War was over and that enslaved people were free reached Galveston, Texas.

Mystic Seaport Museum has an ideal partner for hosting the event in Discovering Amistad, an organization that manages the replica of the Amistad, a 19th century two-masted schooner. In 1839, the schooner was used to transport 53 Mende people (from modern-day Sierra Leone) who were being trafficked into slavery in Cuba. After being sold to Spanish plantation owners, the Mende people fought back and took control of the ship. After doing so they commanded the ship’s crew to bring them back to Africa, but the Spanish sailors brought the ship into American waters instead, hoping to be intercepted. They made it as far as Long Island before being brought to shore in New London, Connecticut, sparking a legal battle over property claims and illegal slavery (treaties against the transatlantic slave trade were in place at the time). The case gained international attention and made it all the way to the Supreme Court, which ruled in favor of the Mende and restored their freedom. The case became a symbol of hope for American abolitionists in the decades preceding the Civil War. Since its creation in 2015, Discovering Amistad has maintained the replica of the Amistad, which in addition to being Connecticut’s flagship serves as a floating classroom, educating visitors about history and racial and social justice.

View the 2 images of this gallery on the original article

The Juneteenth program of events will kick off with an opening ceremony featuring a West African drum call, introductory remarks from both Mystic Seaport Museum and Discovering Amistad, and a selection of musical performances. A panel moderated by Troy Brown will discuss the legacy of slavery and “illuminate how the thread of the past is woven into the fabric of the present.” A Harambee (Swahili for “all pull together”) reflection ceremony will offer visitors a chance to share in the commitment to combating racism and will include another musical performance. Tours of the Amistad replica and a concert featuring Cape Verdean performers will follow. Throughout the day, there will also be food trucks and arts programming. The free event will begin at 1500 on June 19th at the Museum.