Know-how: From Ballast to Berths 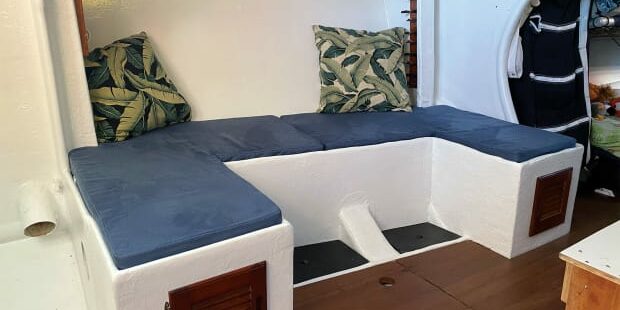 Our Open 66, NV, was originally designed, built, and raced by Hungarian sailor Nándor Fa in the singlehanded around-the-world races Around Alone and the Vendée Globe. Like many such boats, she carried water ballast, up to 4 tons in six tanks (three on each side): one pair amidships, one pair at the stern, and the third pair between these two. Electric pumps filled the tanks, and through-hulls were angled to help the water enter and exit using the boat’s movement and speed. Throughout the bilge, a complex system of pulleys and ropes opened and closed the valves for the different tanks.

When we bought the boat, the water ballast had already been decommissioned, and the tanks were just inaccessible empty spaces. The designer confirmed that the water ballast wasn’t structural or necessary for the normal use of the boat and the cruising we had planned for her, especially with our 4-ton, 4.2-meter (nearly 14-foot)-deep keel. This information, which opened up the possibility of converting those areas to additional livable space, was part of what convinced us that we could turn her from a pure racer into a performance family cruiser.

As with most race boats, NV’s interior was pretty minimal—the only door was to the head. High on our wish list was creating cabins so that we and any guests, crew, family, or friends could enjoy some privacy. With that in mind, we planned to convert the middle ballast tanks to two double cabins on each side of the boat, just aft of the main saloon; remodel the portside forward tank to help open up the main saloon; and recommission the aftmost tanks to expand our freshwater tankage.

Although not as structural as bulkheads, the ballast tank walls still provided some rigidity to the deck and hull, so we had to give careful thought before removing them. In the end, we were able to access and use the space by cutting and removing the longitudinal wall that separated the tanks from the boat’s interior.

View the 6 images of this gallery on the original article

We left the perpendicular walls of the tanks in place as extra structure for the boat. Also, when removing this inner wall, we were careful to leave a few inches of it on all sides around the edges to act as stringers, providing additional support. Finally, we extended the bulkheads—which originally ended at the interior ballast tank walls—along the floor and roof of the area inside what had been the tanks so that they joined with the hull. Using uni- and bi-directional fiberglass strips, we tabbed in the extensions parallel with and 45 degrees to the bulkheads, which would help prevent the bulkhead from twisting. This whole conversion took about a month to complete.

Repurposing the middle tankage area created two nice, cozy cabins on either side of the boat. With the ballast tank wall cut out, there was just enough width for a double bed, with some area around the side for storage. Using the boat’s original aluminum pipe berths as the starting point, we extended this frame to a double, then attached a system of pulleys so the bed could either be lifted slightly to accommodate the boat’s heel and keep the sleeper safe, or come all the way up to allow access to the navigation station and the stern of the boat when the beds weren’t in use.

Opening up the port ballast amidships enlarged our saloon area and let us transform what had been basically a straight-backed bench to a more comfortable C-shape. And with the new configuration, we can fit more people around a table. Opposite, the tank to starboard was behind the galley, an awkward place to reach for any major modifying. But we still improved our use of the space by cutting in access hatches and installing shelves, where we can store some food and other items we don’t need all the time.

Last but not least, we knew we wanted to preserve some of the boat’s water ballast capability for better sailing performance, and we also knew we needed to extend our existing freshwater capacity. We decided to do both by recommissioning the aftmost set of tanks to carry fresh water. These tanks made the most sense for this because the deck is so low in this part of the boat, it’s hard to use it for anything else like living accommodations. (My Italian partner, Timo, even suggested recommissioning one set of tanks with extra virgin olive oil, but since it weighs less than water, this option was overruled!)

Since this aftmost water ballast is mainly used for downwind sailing, we also decided to preserve a bit of the middle tanks—which we’d used for the new cabins—to carry water ballast as well, to help in upwind conditions. So, as we converted the unused tankage in the new double cabins, we walled off about a third of each of them to continue to carry water.

Commissioning these two sets of tanks for fresh water, we now have 1,500 liters (nearly 400 gallons) of drinking water that doubles as water ballast. We use gravity to move it from side to side; before each tack, we open the valve and let the water flow from the windward to the leeward tank, which becomes the windward, ballasted, tank after the tack. We also created a separate 100-liter (26-gallon) day tank for fresh water, keeping the ballast drinking water in reserve. To check the water level of each tank, we’re using the original system, which consisted of a transparent hose on the outside of the tank with a colored floating ball indicating water level.

We’re very happy with the extra space we have onboard, which has already allowed us to have friends, family, and crew stay with us in more comfort. However, we are also happy to have kept some of the tanks to continue using some water ballast, as the boat feels a bit light without them, and having these will allow us to push the boat to go faster with more control.