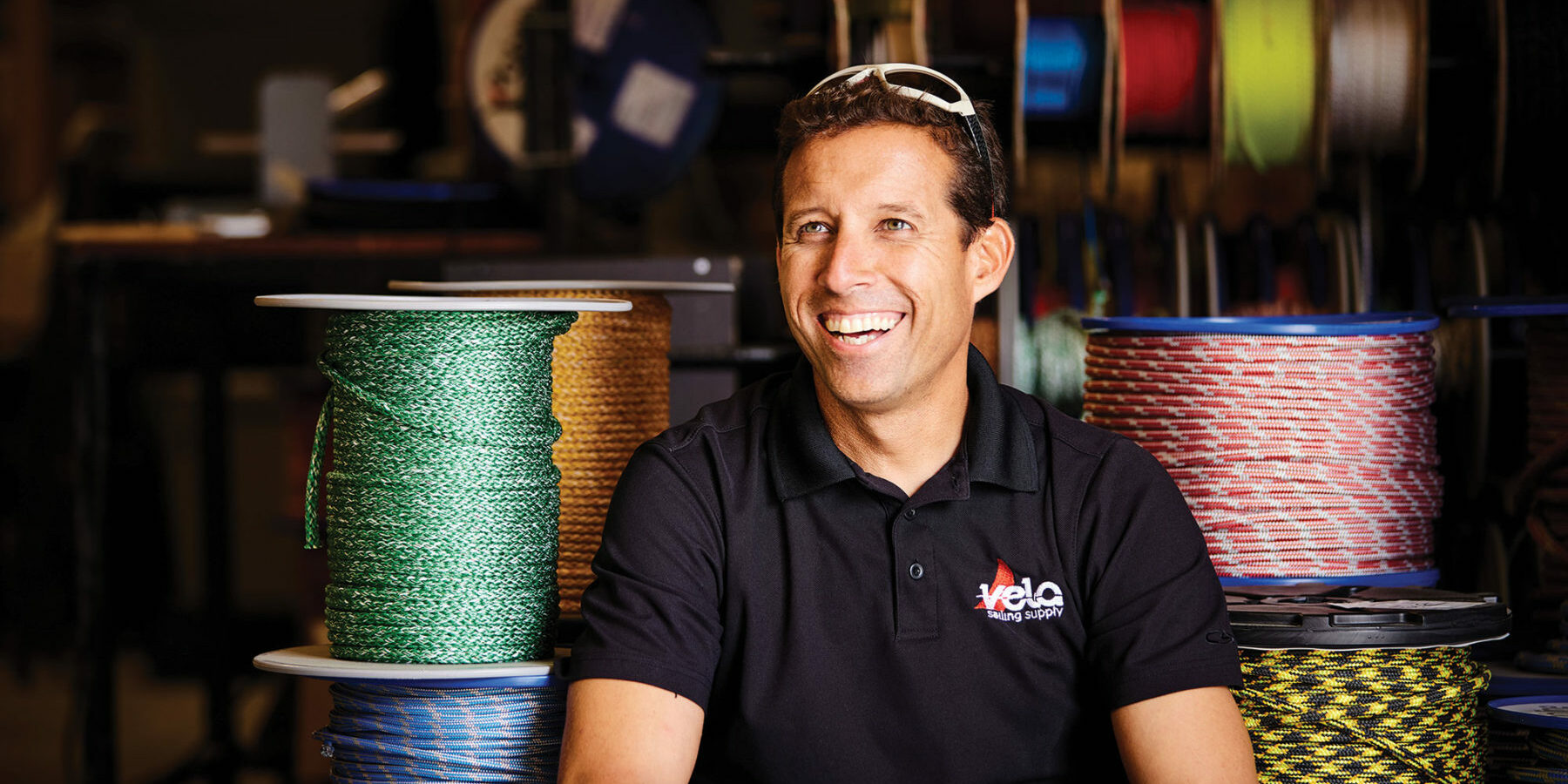 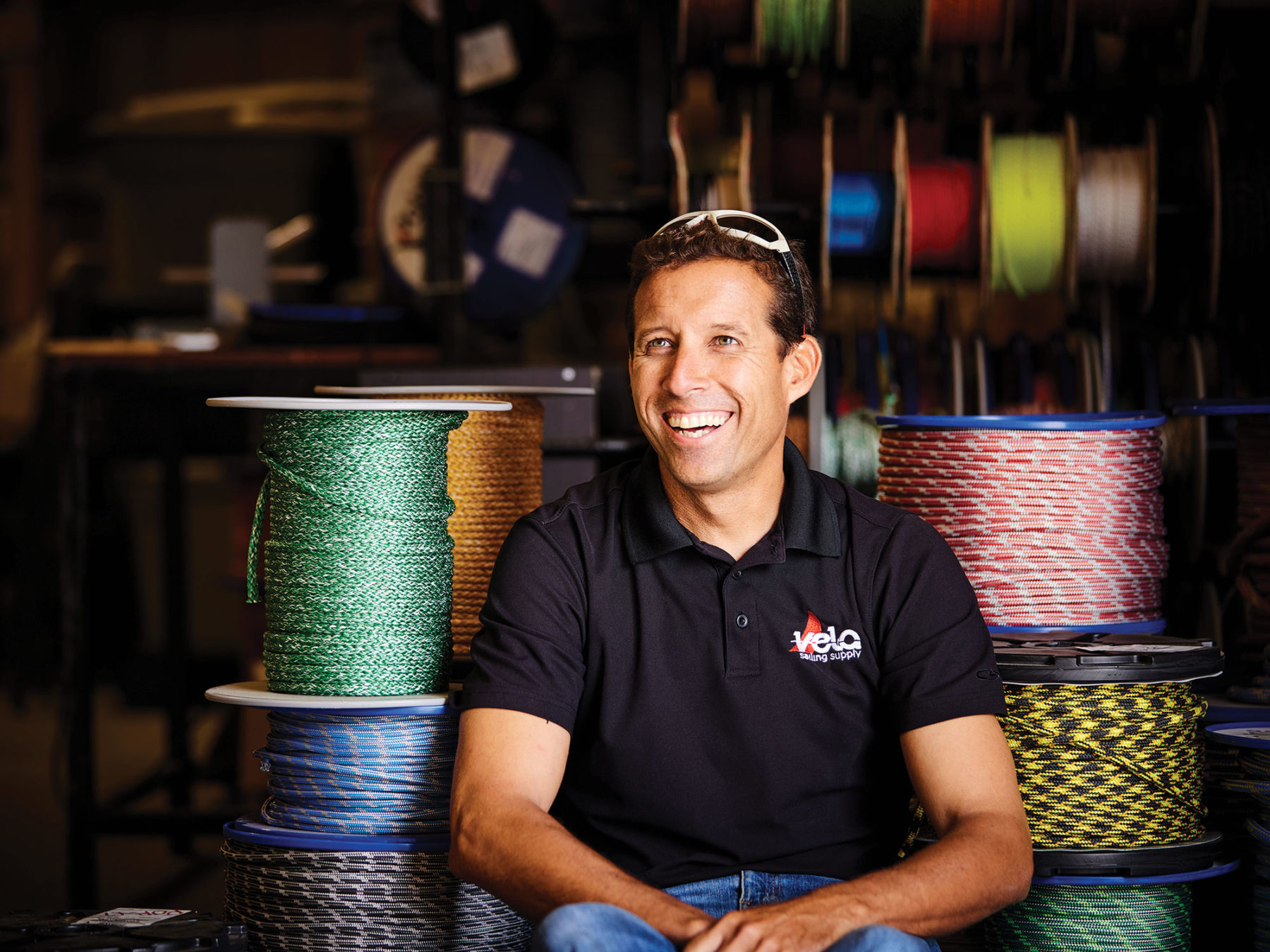 Rod Favela has grown Vela Sailing Supply from a small Texas startup into a go-to e-commerce business in Texas, run for and by sailors. Gustav Schmiege III

To meet one of the hardest-working ­hombres in the sailing industry, you’re going to want to head west on Texas Interstate 30 toward Rockwall and Lake Ray Hubbard. Just past Cavender’s Boot City, where cowboys and girls source their Western wear, is a place called Vela Sailing Supply, where yachtsmen and women now score their sailing gear. Inside this 4,000-square-foot warehouse are racks and shelving to the ceiling packed with sailboat hardware, clothing and dinghies. There is a wall of cordage spools and, at the far end, a loft table for managing sails. In the office is a fast-talking Venezuelan, phone to the ear, laptop open, white-framed sunglasses nested on a tussle of jet-black hair.

What started as an online chandlery business from Favela’s laptop in 2011, the operation is now a bustling business with nine employees—including his wife and son, who manage international shipping logistics of everything from $1 split cotter rings to $35,000 VX One sportboats. Their e-­commerce website and walk-in warehouse offers virtually anything and everything a sailor could possibly need, especially hard-to-find stuff for racers—the niche gear you’ll never find at other big-box marine stores.

While business is booming on account of a pandemic bump in sailing, it’s well-known that those who are loyal to Vela Sailing Supply are so because of the man himself. He’s a champion sailor, a friend to all, and one heck of a salesman. For Favela, there’s no such thing as an eight-hour day or traditional work week. If he’s not in the warehouse, he’s racing the keelboats and dinghies he hawks, or coaching on the side because he’s good at that too.

“For us, the company is very much about connecting to our beliefs, and I don’t want to sound corny about it, but the truth is that you can buy a Harken or Ronstan block anywhere, but what we are doing here is offering solutions to sailing problems,” Favela says. “To make sure sailors have a source and a business friend that they can rely on. We sell everything that makes a ­sailboat a sailboat—that’s what we do.”

Favela’s business and customer savvy didn’t come from formal business schooling, but rather through a long and twisted sailing career that started back in Venezuela. An extremely abbreviated version of his story goes something like this: He was born in Caracas, and at age 10, his family moved 200 miles east to the coastal town Puerto La Cruz. As a kid, he was terrible at other sports, so his parents forced him to try sailing. A fleet of Sunfish leftovers from the Pan American Games was his first bite of the sport.

“I still remember my first coach,” Favela says. “He was very good and very firm, and after my first session, he said I was ready to go on my own. Most kids would take three or four days, but for this guy to say I’m ready—I remember how it gave me so much confidence.”

Favela rose through the ranks of the local Sunfish scene alongside the native greats, like multiple-class world champion Eduardo Cordero, before crewing on bigger boats—IOR dinosaurs that retired in Venezuela. He eventually moved back to Caracas for school, but never finished. Instead, he “lived in the jungle with the natives for five years,” earning a good living in the ecotourism industry. “But it kept me away,” he says. “I would do some regattas from time to time, and one day I was invited to a PHRF regatta, and all the demons came rushing back… Something was telling me I have to come back home; sailing is my home.”

Favela left the jungle gig and worked weekdays at a North Sails loft, living in a marina on a J/24 with his wife and driving two hours to the coast to coach on weekends. Then, in 2005, he had an opportunity to relocate to the United States and work for a Texas-based chandlery—another story for another day. Six years later, at the age of 35, he struck out on his own and started Vela.

“It was intimidating because, here, in the Texas desert, we didn’t have a strong local market, at least not enough to sustain a business,” Favela says. But with the support of early investors and the good faith of suppliers, he was able to make it happen. “I am blessed that the moment I got off the plane in this country that I have had a lot of help from a universe of people believing in us. By no means have I built this on my own and got to where we are today.” 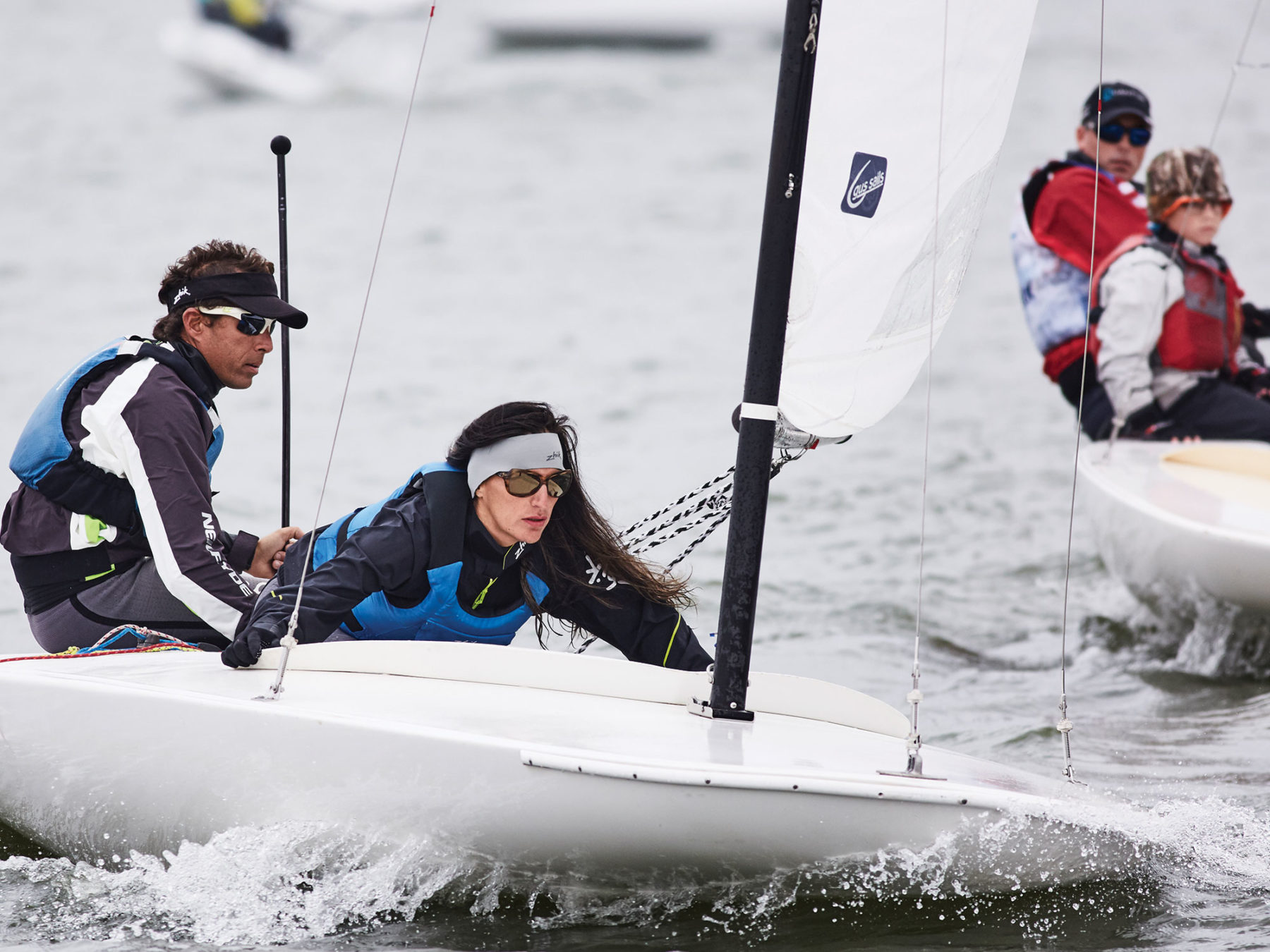 For Favela, life is a trade-off of work, family and racing. When home, he sails with Rush Creek YC’s VX One and MC Scow fleets with his wife, Gisela Quevedo. Gustav Schmiege III

Those who know and sail with Favela note his boundless energy, pearl-white smile and supply of jokes—always at his own expense—as defining traits that make him fun to be around, on and off the water. He’s always happy, he says, because running a business 24/7 and racing as often as he does allow him to enjoy the fruits of both. “We play hard, we sail hard, we work hard and love the sailing world,” he says. “It’s as simple as that.”

Still, it’s not always easy being the face of the company and on the road as often as he is at home. “The long hours and trips do put a toll on the time that I can spend with my family,” Favela says. “They’ve been a crucial part of this. There is the blessing of technology, and the curse because we are connected all the time. There are expectations from customers, and we are committed to them, and sometimes we get behind when I’m away at regattas. But when I do it, I always do it for the business. We have to maintain the connection of what we believe, to be with the sailors.”

Otherwise, he says, he’d be just another hardware hawker.

If Favela had his way, he’d be sailing more and tethered to the laptop less, but there’s a life balance he’s managed to keep by following his own formula. “When I have to make a decision as to whether I go sailing or not, I have essentially three approaches: First, I ask myself, ‘Rod, what do you want to do?’ Second, there’s the family. Is this time away the right time to do it or not? Third, there’s the business. How much is it going to be pulling me away? I have one great way to nail it down, and that is my level of regret. Regret is a scary thing; I know I will regret one of those three, so dollars and pennies aside, which one will I regret the most? And that’s how I decide.”

His boat of choice is the VX One, which has an active fleet in Texas and he can now race with his son. And while he’s accomplished a lot over the past few years, his personal highlight was winning the 2021 J/22 World Championship in Corpus Christi, Texas, with Jeff Progelhof and Olympian Paul Foerster, who Favela says is the ­greatest sailor on the planet.

“It’s a big deal to win the regatta, but just forget about the sailing…just [what] good humans Jeff and Paul are,” he says. “To sail with such amazing humans—and then to win too? I counted my blessings that day. Actually, I count them every day.”