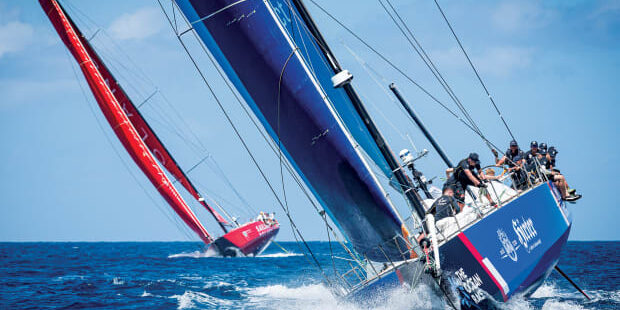 Where does an old VO70 go to retire? Right back to the racing circuit, apparently. This spring saw a remarkable contingent of Volvo Ocean Race one designs back on the water and duking it out on the Caribbean circuit. While it’s no surprise that some of the VO65 teams intending to compete in The 2023 Ocean Race (formerly the Volvo Ocean Race) would be making the most of their remaining training time by jumping into the Caribbean racing season, the number of VO70s that joined them was quite impressive—especially since it’s been a decade since the boats last competed in the round-the-world race they were built for. Many of them, like the Spanish-flagged HYPR (formerly Camper) are now pay-to-play, offering a high-power racing experience to non-professional sailors, meaning fans of past editions can actually go head-to-head with those same teams that will be on the start line of The Ocean Race this January.

View the 2 images of this gallery on the original article

St. Maarten’s Heineken Regatta (heinekenregatta.com) alone saw eight VO65s and VO70s in its CSA division, which also included a Farr 100 and a Botin 85. The event was won by Sailing Poland, one of the VO65s registered to compete in the 2023 Ocean Race. No surprise there, as Volvo Ocean Race legend Bouwe Bekking served as tactician. He will also be the boat’s skipper come January. Bekking’s old boat Team Brunel, now Janssen de Jong-DutchSail, also made waves on the Heineken course, securing second place. Even without Bekking at the helm, Janssen de Jong-DutchSail will be a serious contender in 2023, as the team behind this campaign is much the same as in the 2014-15 and 2017-18 Team Brunel campaigns.

Despite the familiar boats and players, things will nonetheless look a little different for the VO65 fleet on its third lap around the globe. In its inaugural edition, The Ocean Race will include a trio of rules of three—each VO65 team must have at least three crewmembers with significant offshore experience, at least three crewmembers under the age of 30 and at least three crewmembers who are female. Even allowing for sailors who check multiple boxes, on a boat that sails with 10 people (11 on the ultra-leg from Cape Town to Itajaí, Brazil, through the Southern Ocean), that will require some very thoughtful consideration of how to select crew. For the latest on The Ocean Race, go to theoceanrace.com.