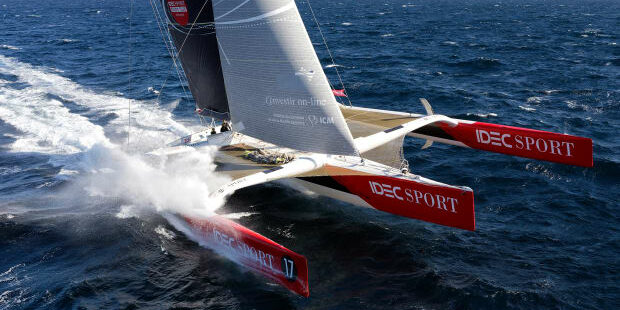 Although the 1903 defender of the America’s Cup, Reliance, was deemed a “racing freak”—the boat pushed design rules to their limit and couldn’t be beaten, at least in very specific conditions—designer Nat Herreshoff was nonetheless onto something. A century later, purpose-built boats have become a staple in the world of speed records, whether they be race records, course records or outright records. Among these records are a few that eclipse all others in terms of prestige: the Outright, Nautical Mile, 24-Hour, Transatlantic and Circumnavigation Records. Each of these records is currently held by a multihull, some more unusual than others, but all representing the absolute cutting edge of design development. Here’s a brief history of the ultra-fast and how we got here.

The Outright Record is a 500-meter speed test that is notable for the cutting-edge (and sometimes strange) designs that have won it over the years. Some of the more recent designs have even faced criticism about whether they’re technically sailing at all. However, the World Sailing Speed Record Council, which monitors many of the major records, considers a craft eligible if it fits broad criteria, like using exclusively wind and water to influence speed, having at least one person onboard and sailing on liquid water not ice.

The first recorded 500-meter speed record was set at 26.3 knots in 1972 by the British sailor Tim Colman on the proa Crossbow. For the next eight years, Colman chipped away at his own record, breaking it six more times, four of which were with his upgraded boat, a catamaran called Crossbow II. In 1986, French windsurfer Pascal Maka took over the title with a 38.9-knot sprint in Sotavento, Spain. With the exception of the proa Yellow Pages Endeavour’s 1993 record-setting 46.5-knot run, windsurfers like Maka’s would reign supreme for 22 years, chasing the record up to 49.1 knots.

Then came the era of the kitesurfers. In 2008, kitesurfer Robert Douglas bested windsurfer Antoine Albeau’s record by less than a knot, setting the record at 49.8 knots and ushering in a new reigning class. The record was broken four times in 2008 alone, a year that also saw French sailor Sebastien Cattelan become the first sailor on record to go above 50 knots. Future Kitespeed World Record holder Alexandre Caizergues also took the title for the first time that year.

In a total departure from the trend toward small and lithe, the next year the 60ft trimaran l’Hydroptère took the title. Its record of 51.4 knots was set by Alain Thébault in Hyeres, France—another deviation from the norm as Namibia had become the preferred location for kiteboarders to base their record attempts. Regardless, on September 4, 2009, l’Hydroptère broke both the Outright and the Nautical Mile records in the same run.

October of 2010 proved an especially volatile month for the Outright, with Caizergues, Cattelan and Douglas all briefly holding the title. In fact, on October 28, Cattelan held the record for just 14 minutes before Douglas took it back.

View the 5 images of this gallery on the original article

Douglas’s record stood for over two years until November of 2012 when Paul Larsen on Vestas Sailrocket 2 smashed it by over 3 knots. Vestas Sailrocket 2 improved on its own time about a week later, breaking the 60-knot barrier for the first time. A decade later, Larsen’s record of 65.5 knots still stands.

Currently, two attempts to best Larsen’s record are underway. The first of these, spearheaded by Caizergues and under development at an innovation lab called Syroco, is Moonshot #1, a nearly frictionless capsule-like craft with a kite sail and counterbalancing T-foil to keep it water-bound. Notably, the Syroco team hopes its design will help make true eco-friendly transportation by sea possible.

The second effort is based in Switzerland where a group of École Polytechnique Fédérale de Lausanne university students and engineers have been working to develop the SP80. Their team boasts some impressive credentials, including a number of folks formerly on the record-setting 2009 l’Hydroptère team. SP80 co-founder Benoit Gaudiot is also in a friendly competition with his own brother, Thomas Gaudiot who is an engineer on the Syroco team. Unlike Moonshot 1, the SP80 is a trimaran with a main capsule reminiscent of a fighter jet’s fuselage bracketed between water ski-like amas. Both groups anticipate their designs breaking the 80-knot barrier—20 knots above the current record—sometime this year.

As both the Outright and Nautical Mile records are sprint distances, the Nautical Mile Record holder’s list contains a number of familiar names. This record has only been kept since 2003 when it was first awarded to the Dutch windsurfer Bjørn Dunkerbeck for a 34-knot mile in the Canary Islands. Dunkerbeck improved his record the next year but lost it the following year to Finian Maynard, an Irish windsurfer who came breathtakingly close to breaking the 40-knot barrier with a 39.97-knot mile in Walvis Bay, Namibia. Dunkerbeck had one more chance to shine the following year when he reclaimed his title and broke into the 40s with a 41.1-knot mile.

Then in 2007, l’Hydroptère set out on a serious winning streak, and with Thébault at the helm, reset the record four times from 2007 to 2009, edging the record up to 50.2 knots. Three years later, Larsen and Vestas Sailrocket 2 set the pace at 55.3 knots where it remains today.

The 24-Hour Record eases back into slightly more familiar designs, with maxi trimarans pretty much as exotic as it gets. This is largely due to the fact that longer speed runs require more stability and consistency than purpose-built speed machines that only need to keep pace for 500 meters. Plus a sprint boat doesn’t need to have berths or amenities for the crews, however sparse they may be aboard today’s ocean racing thoroughbreds.

The first officially recognized 24-hour speed run was by the clipper ship Lightning in 1854, when it sailed 436 miles in a day at an average speed of 18.2 knots. Later that year, the American clipper Champion of the Seas logged a day averaging 19.5 knots, a feat that remained the fastest day on record for 130 years.

It wasn’t until the age of the maxi-multis that the 24-Hour Record changed hands again, first going to the 100ft catamaran Formule Tag in 1983 with an average speed of 21.3 knots—under 2 knots faster than the 250ft clipper. Over the next decade, a number of French campaigns would chip away at the record, only ever improving it by a matter of tenths of a knot. During this time, the World Sailing Speed Record Council took over officiating the record.

Finally, in 1999, American skipper Steve Fossett made the first big dent in the record in decades, bringing the 105ft catamaran PlayStation into the mix with a 24.2-knot run. The slightly larger French-flagged cat Club Med improved upon Fossett’s record by about a knot and a half the next year, and the two boats traded the record back and forth through 2001, pushing it up to 28.6 knots. After that, cats continued to rule the record—with Maiden 2 and Orange II each earning their time in the sun—until 2007, with the arrival of the first trimaran to claim the title in 13 years: the 103ft Groupama 3 (later known as IDEC Sport). Groupama 3 held the record for two years until another maxi tri, Banque Populaire V, shattered Groupama 3’s record by over four and a half knots, setting the pace at 37.8 knots and covering 906 miles in the process. It was the largest single improvement in the 24-Hour Record’s history. Banque Populaire V has been undefeated since, holding it for nearly 13 years.

Crossing the Atlantic quickly and safely has been a priority ever since explorers and colonizers began doing it over five centuries ago, and this legacy makes it one of the most prestigious sailing records of them all. That said, there are a number of different versions of the record with things like the direction of the crossing (west-to-east or east-to-west), crewed or singlehanded, and monohull or multihull all claiming their own records. West-to-east tends to be the most celebrated route due to the fact that it follows the prevailing westerlies and is, therefore, faster than going east-to-west. The course, which measures roughly 2,880 nautical miles, stretches from Ambrose Light in New York to a finish line between Lizard Point, Cornwall, and Ushant, a French island at the southwestern end of the English Channel.

Many of the big names from the 24-Hour Record have held the crewed Transat Record at one time or another including Fossett’s PlayStation, Orange II, Groupama 3 and Banque Populaire V. In the early aughts, all boasted records under five days, with Banque Populaire V posting the current time to beat. This crewed campaign was skippered by Pascal Bidégorry and averaged an astounding 32.9 knots over the course of the crossing.

Though the World Sailing Speed Record Council doesn’t recognize crewed monohull efforts independently from crewed multihull efforts, it must be acknowledged that the 100ft Comanche launched a 2016 campaign to be the fastest monohull to cross the Atlantic. Instead of the typical approach of slaloming two weather systems to maximize wind, navigator Stan Honey theorized that under very specific conditions, a boat like Comanche could pull it off in one. In 2016, the team set a new crewed monohull Transatlantic Record at five days, 14 hours, 21 minutes and 25 seconds. Not bad for a boat with a keel!

The record for fastest circumnavigation is known as the Jules Verne Trophy, named for the author who penned Around the World in 80 Days. In 1993, the first recipient of the Jules Verne Trophy was Bruno Peyron, skippering an 86ft catamaran called Commodore Explorer that completed the course in 79 days, six hours, 15 minutes and 56 seconds, just making the trophy’s original 80-day challenge. Notably, Commodore Explorer also held the crewed west-east Transat Record from 1988 to 2003 under the name Jet Service V.

The same year Commodore Explorer won the Jules Verne Trophy, Formule Tag, the first modern boat to break the 24-Hour Record, was purchased by the power team of Sir Robin Knox-Johnston and Sir Peter Blake. They renamed the boat ENZA New Zealand and sailed it to a new record in 1994, taking four days off the previous record in the process. They were the last non-French sailors to hold the title.

Olivier de Kersauson took the record next aboard Sport Elec. After that, de Kersauson and Peyron traded the record back and forth until 2005, when Peyron sailed Orange II to a new record of 50 days, 16 hours, 20 minutes and four seconds that stood for five years.

From there Groupama 3, skippered by Franck Cammas, improved the record by two days, and in 2012, Loïck Peyron, Bruno Peyron’s brother, skippered Banque Populaire V to a finish time of 45 days, 13 hours, 42 minutes and 53 seconds. Finally, in 2016-17 Francis Joyon sailed IDEC Sport (refitted and renamed from Groupama 3 since Cammas’ record) to the current record of 40 days, 23 hours, 30 minutes and 30 seconds—almost exactly half of the original challenge.

In the five years since Joyon’s record, there have been a number of campaigns to improve upon it, however, all have failed. In 2019, Yann Guichard was forced to abandon after just one day due to rudder problems on Spindrift 2 (formerly Banque Populaire V). Similarly, in 2020, Thomas Coville suffered a rudder failure on Sodebo Ultim 3 that cut his attempt short just after entering the Indian Ocean. Also in 2020, Cammas returned to the race on Gitana 17 (currently known as Maxi Edmond de Rothschild) but broke a foil shortly into his run. Cammas tried again in 2021 but suffered a rudder failure while rounding the tip of South Africa. As recently as this past autumn, an attempt by Sails of Change (formerly Spindrift 2/Banque Populaire V) was abandoned when a weather window failed to open up during the desired start time.