Team Mirage Best in the BVIs 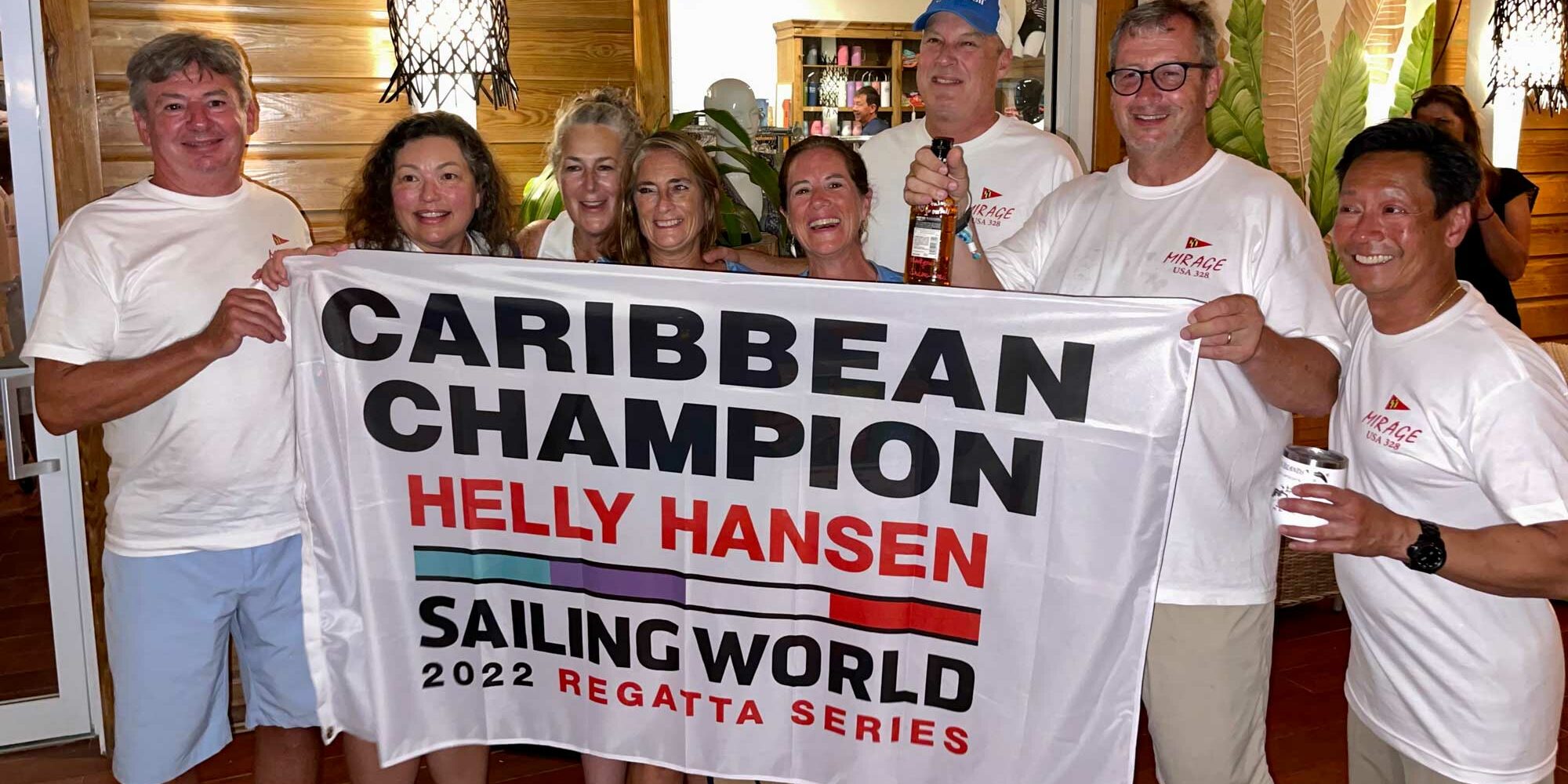 Picking up the story where we left off.

What do hardcore racers do a 32-hour layover at the Bitter End Yacht Club?

That’s easy. There are bars, of course. And there’s some seriously fine dining, but the best of Bitter End is down on the beach where Hobie Waves and Getaways are always neatly arranged, rigged and ready to go. Inside the waterfront center a few wings hang in wait. More boats, and kites and wings are on their way. Rebuilding the house that Irma took is a work in progress, but the place is on its way to former glory. Sailors, friends and family are welcome anytime, so we made ourselves right at home on the marina’s docks, jumped into Wave Beer Can Racing, did Getaway Gorda Sound speed runs on, snorkeled the reef, and tossed back rum drinks with a hundred new friends.

Speaking of tossing back the rum. Our traditional Mount Gay Rum drink contest went a bunch of notches higher with the addition of a real judging panel, including the likes of mixologist Everson Rawlings, who goes by the name of Casper and basically gets paid to sample drinks and make new ones. When it comes to rating taste, presentation and originality, this guy is a pro. Celebrity chef style.

The way the contest works is simple: each team—nine total, remember—must submit a drink to the judging panel. The primary ingredient must be Mount Gay, of course. From there, it’s anywhere you want to go, and for Gary Schwarting’s Team Obsession from St. Petersburg, they went straight to the freezer aisle and scored a pint of BVI-made banana flavored ice cream. 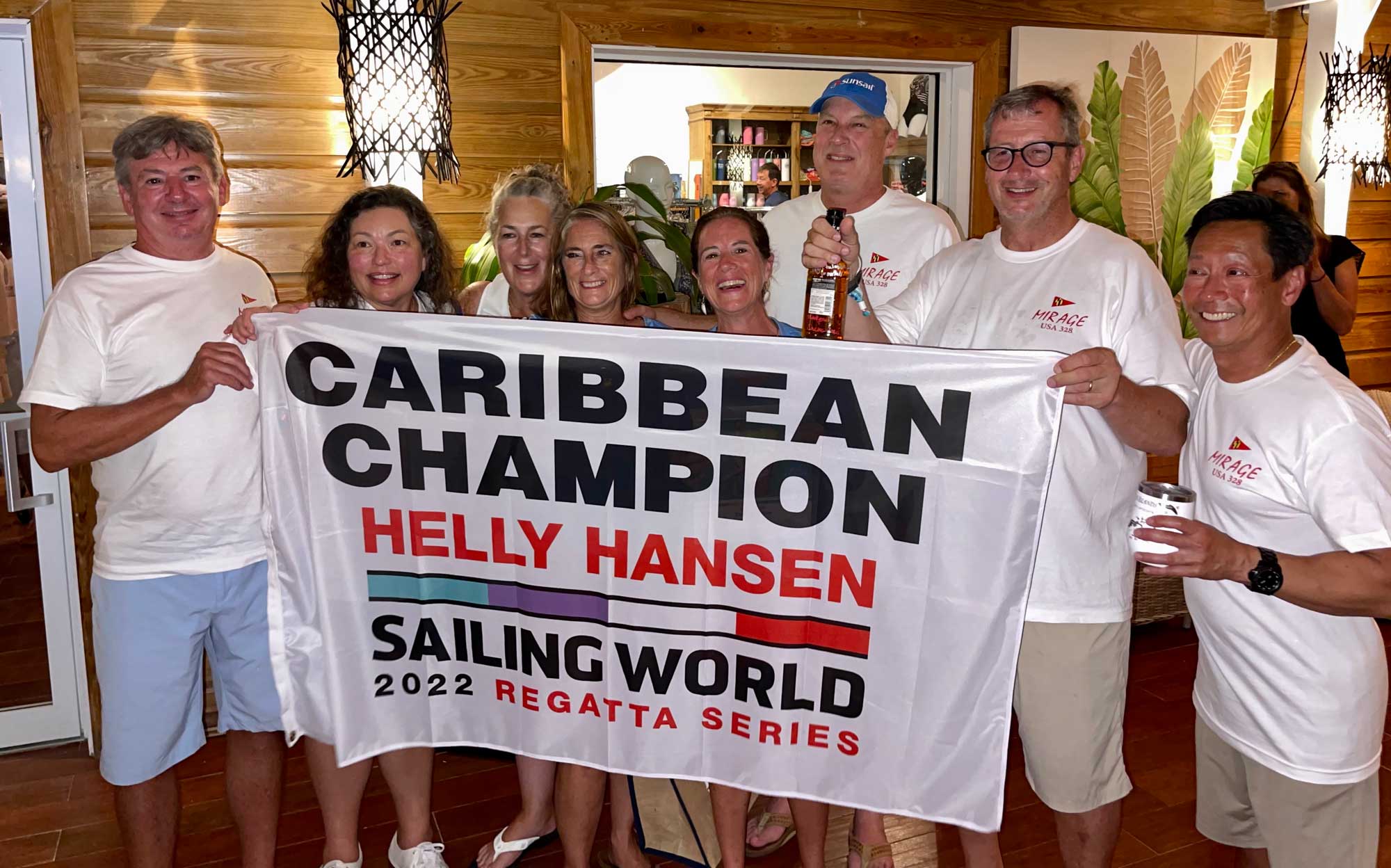 Skipper Cedric Lewis (second from right) led his Annapolis-based J/105 to the Helly Hansen Sailing World Caribbean Championship and then won the regatta on the final day after a blustery boatspeed battle with the defending champion. Brook Alexis

Everson took a pull through his short straw, smacked his lips, bowed his head and declared: “Mon, I’d bottle and label dis. Incredible.”

Nothing, not the Ting-a-Aling nor the runner up Lazy Lizard from Annapolis’ Team Mirage, came close to Obession’s “Slug.” The recipe card reads as such: 12 oz. Mount Gay Rum, 24 oz. fresh pineapple juice, 12 oz. splash of club soda, and one or two scoops of the ice cream. Give it a fresh pineapple slice and dive right in.

This was Team Obsession’s first “win” of the regatta, but it was victory to savor right into the next morning’s Leg from Gorda Sound to Guana Islands. A persistent windshift overnight brought an ominous cloud deck waiting to rain on our parade. Being the kind and understanding PRO that he is, Dick Neville gave Team Obsession’s (renamed Slug) a 15-miniute head start on the inshore legs of the course; a beat to the first Biras Creek channel marker and a jib-pole run straight out of the Gorda. Great Camanoe island to port and a finish line off Guana’s Monkey Point is a straight and long shot.

While Obsession enjoyed an empty race track, the rest of the nine-boat fleet (with the exception of Team Crump, again alone in the Cruising Division), tossed off their sailing gloves and went at each other with tacking duels and loose covers before rounding the mark, deploying custom jib poles and exiting the sound in an orderly fashion, sails winged, bows pointed toward Camanoe. Cedric Lewis’ Team Mirage, which to this point had failed to beat Jim Sears’ illustrious Team Viper, slipped across the line first to notch its first win. Steve Hosch’s posse on Team Omaha checked in next and then came Team Viper to round out the top three, setting up a tie at the top between the Mirage and Viper camps. 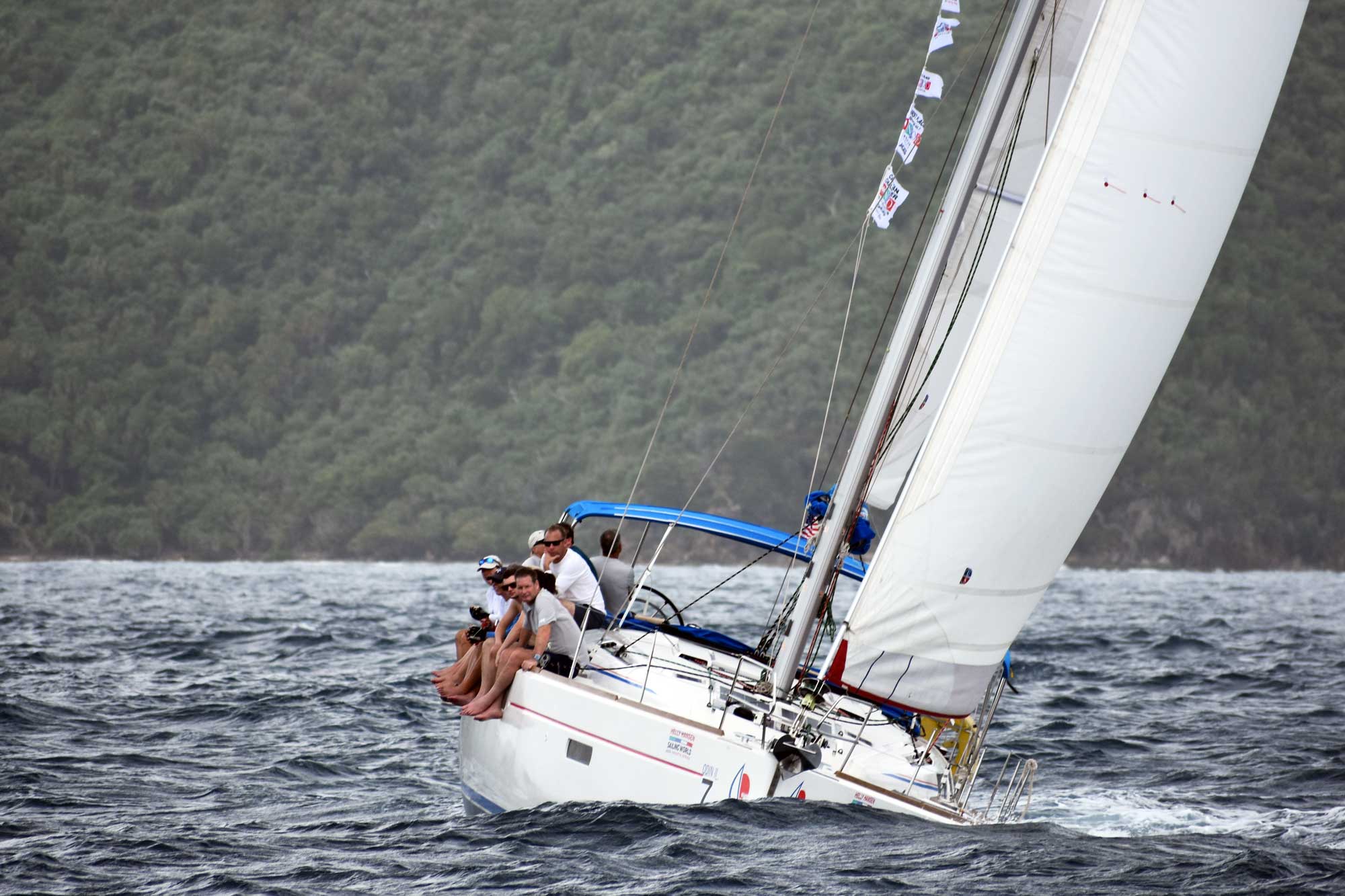 The heavens opened and the winds howled over the top of the lush green towers of Tortola as the fleet set off downwind again toward Sandy Cay. It was a sporty start, but in the vein of things going up must go down, the rain came to an annoying trickle and the breeze all but vanished. Panic ensued across the fleet and the VHF lit up: “Race committee: Will we make it in time for our 6:30 dinner reservation.”

The understanding and merciful race committee pulled the plug. The standings would remain unchanged and competitors were free to scatter to the many watering holes of Jost Van Dyke.

The fleet met again the following morning off picturesque Sandy Cay and for this final regatta leg to Norman Island PRO Dick Neville tweaked the Dick Handicap System by pinging both the Viper and Mirage crews with a 15-minute delayed start.

We finally got ourselves a match race. The two teams wasted little time in trailing and pushing each other around inside the starting box until Mirage shoved the Vipers outside the pin with less than a minute to go. Mirage got away clean and led through Great Thatch Cut and straight into a 25-knot gear buster. By Sears’ account, Mirage was faster at times and it was annoying. With some adjustments, the Vipers started taking bites out of their lead and then tacking duel ensued.

That was the difference in the end, as Mirage beat the Vipers to the Bight and claimed the lead before the afternoon’s one and only buoy race, with marks set inside The Bight. After a lunch and rum break, Sears reported a breakdown—a frayed mainsail halyard—would make him a no-show for the race. Mirage’s crack crew led the buoy race almost wire to wire before sailing into hole on the final leg and getting rolled by Rudolph Hasl’s hard-working crew on Team Paleamon.

With a firm grasp of the 2022 Helly Hansen Sailing World Caribbean Championship title, Lewis and mates—and they are true mates that sailed together for decades on all sorts of Mirages—took their celebration straight to the awards and the Willy Ts, last seen bobbing and weaving on the dance floor in their blue T-Shirts and plotting their defense for this time next year. The team’s 2-2-1-5-2 scoreline is mighty impressive, because, as Lewis pointed out to this large gathering of new sailing friends: Obsession is like one big happy family and a family that sails together wins together. And that’s especially true in the BVIs.

The post Team Mirage Best in the BVIs appeared first on Sailing World.