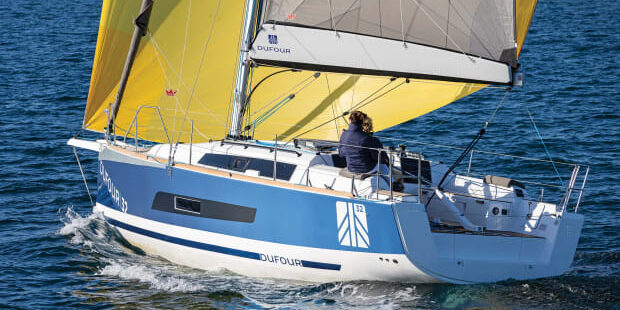 With an increasing number of truly massive yachts on the docks at boat shows these days, it would be easy to assume that the boatbuilding industry is going all in on the “bigger is better” approach. However, nothing could be farther from the truth. As demonstrated in these three new performance-oriented designs, the craftsmanship and innovation expected in a megayacht are also showing up in the more proletarian, shall we say, sized boats of many manufacturers’ ranges.

Like the rest of its siblings in the Dufour range, the Dufour 32 is a sporty yet easy-to-handle boat with comfortable accommodations. This is achieved in part by creating a number of multi-use spaces both on deck and below. Case in point: the boat’s foldable tiller, which allows the skipper to enjoy smooth steerage and instant feedback under sail and guests to have plenty of space to lounge about in the cockpit while on the hook. Despite the focus on performance, the deck has many of the hallmarks of a large cruiser, including an aft sunbathing area and a removable, innovative inflatable aft cockpit “door,” which folds down into a water-level platform, adding square footage to the recreation space. The deck is available in either performance and standard versions, with options for things like mainsheet placement on the cockpit sole or out of the way on the coachroof. A self-tacking genoa track is recessed on the coachroof. The hull is hand laminated polyester/fiberglass.

The interior, though cozy, provides comfort to spare, with features like an oversized table that folds down to create a large sleeping area, making the most of what space there is. Well-sized windows give the illusion of light and volume. Three interior aesthetics are available: a pale, neutral color scheme called “Europe,” a classic darker wood called “Boston,” and a funky teal and gray option called “Millennium.”

I’m somewhat skeptical of the title “performance cruiser,” since a jack of all trades is usually the master of none. However, the Dehler 38SQ is one of those boats that allows sailors to have their cake and eat it too. From first glance, this design looks fast, with its assertive-looking fixed bowsprit, plumb bow and optional square-top main. Looking closer, the boat also includes a wealth of performance-oriented details, like flush-mounted, retractable footrests and extra high stanchions. Twin helms lead to a single rudder (the hull isn’t beamy enough to want a second, even at more aggressive angles of heel), with instruments sensibly tucked in on a somewhat low control panel to starboard, keeping them unobtrusive but still easily visible. Three rigs are available: standard, competition aluminum and competition carbon. Standard, competition and shallow keel options are available as well. The boat’s hull is made up of a balsa wood sandwich core laminated with vinylester resin and fully integrated into a signature Dehler carbon cage-floor structure.

Belowdecks, Hanse has exploited every opportunity to bring in as much natural light as possible to complement the wide array of available finish and textile selections. The result is in a sunny, airy feel that seems a lot bigger than 38ft. Interior options include two or three cabins and three different chart table configurations, which will no doubt please a contentious skipper and/or navigator. In all configurations, the master cabin is in the bow, which may be a bit bouncy during the speedy passages this boat will surely deliver.

There are no two ways about it, the Beneteau First 36 is designed for sailors who want to go fast. Falling somewhere beyond a standard racer-cruiser on the performance spectrum, but coming in short of a full-on Class40, even the standard version of this boat will plane in a moderate breeze. The deck has been laid out to accommodate both shorthanded and fully crewed campaigns, with the positioning of the six winches, twin wheels and other deck gear tested on several mockups to make sure everything flows correctly. Ergonomically cross sheeting to windward has been fully thought through, and the wheels are mounted slightly higher than is typical, making it easier for the person at the helm to participate in sail adjustments when sailing shorthanded. To keep costs down, an aluminum rig and cast iron keel are standard. However, both have been refined to get the most out of their shape and optimize efficiency. Because designers expect this hull to make waves in PHRF and other handicap racing circuits, balancing easy planning with upwind performance was a key consideration.

When taking the boat out more casually, the cockpit table can seat six and a bathing platform makes for easy water access. Belowdecks, Beneteau has carved out as much space in the 36ft hull as possible, achieving roughly the same volume as the company’s venerable First 40.7, despite being a fair bit shorter. The layout includes three cabins with full-sized double berths, a large nav table and a distinctively placed central refrigerator to increase galley space.