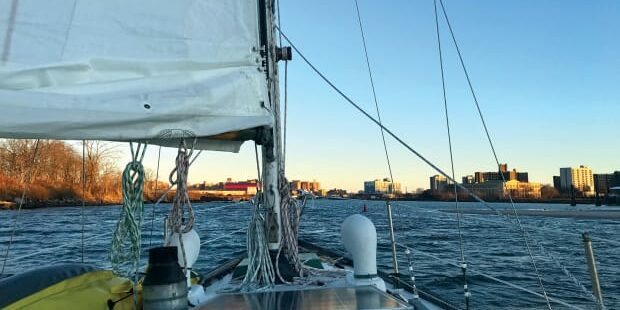 Did you miss Part 1? It can be read here.

Anchored off Liberty State Park, I awoke late in the day to a Manhattan skyline and Hudson River so still and crystalline that I decided the first order of business would be to row my ill-repaired inflatable kayak the three miles to the Liberty Landing Marina. Someone who kept a boat there had left me a key card to the showers and some snacks, and I could very much use both.

The kayak was a bottom-shelf inflatable I’d been given up in Maine. It had served me well until I popped a seam on one of the hulls a few weeks earlier. I repaired it with a piece of sail cloth and 5200, which seemed to hold up fine at first. Then it ripped again after catching on an oyster, and a gale blew away the plastic valve that keeps air in the pontoons after I’d left it on deck. I used a wooden plug instead, but it now slowly leaked air from pretty much everywhere. I just pumped whatever chamber needed it while on longer paddles.

Before shoving off from Teal, my 1962 Tripp 29, I put on my lifejacket with a small personal locater beacon and stuffed my phone in a dry bag for good measure. I also took a few minutes to check out where I had run aground coming in to make sure I didn’t do it again coming out. As I rowed past the seawall in the channel where I’d come in, I noticed the deep water was mere feet from the rocky wall!

The Statue of Liberty ablaze in the pink hued sunset, I continued to hug the seawall as I turned north. By now the tide had turned and I was fighting a strengthening current, but because I was outside the main channel it was doable. I also had to dodge the invisible lines of residents fishing from shore. Water was coming into the kayak, but only in a way that was a nuisance, not a danger. Halfway through my paddle, I remembered the Hudson was filthy. I passed a danger sign warning against paddling and contamination after it rained! Luckily, it hadn’t done so recently, but I was still pretty disgusted.

I reached what I thought was the entrance to the marina, but it turned out to be a huge pier I’d have to go around with a busy ferry dock, much faster opposing current and giant wakes. The kayak was no match. My only option was to scale the rock wall a half a mile back and portage the kayak the rest of the way. The marina bathroom facilities were somewhat lackluster for such an expensive spot, not to mention what I went through to get there. When I was done showering and snacking, I deflated and folded up the kayak and took a cab back to where I’d anchored.

The next afternoon with a brisk northwesterly in store, I bundled up to set sail again. I raised the main while still at anchor, knowing it would not be easy to do so underway. Plus I hadn’t charged the electric motor since going through Hell Gate. That didn’t matter as there was plenty of wind.

What I didn’t know was how fast I’d be going downwind as soon as I was off the hook. Even with a double-reef in the sail, I had underestimated the wind strength and my speed. I wanted to go slow because of the rocks I’d hit coming in at night. There was literally no turning back, however, so by the time I picked up to 5.5 knots, the best I could do was watch for clear water off my port bow, which amazingly for the dirty Hudson, there was.

I had waited until the afternoon when the tide was coming in and made sure to have my self-steering wind vane stowed in case of hitting the rocks again on the way out. As I made it through the pass, the people walking in the park, which felt like an arm’s length away, looked at me like I was crazy. I guess I kind of was.

The current was against me as I made my way out toward the harbor entrance, but all it did was slow me down and make fun waves to surf. At the Verrazano Narrows, I got caught in a tide rip. The mainsail was full, but the boat was still. Unfurling the jib pushed us under the bridge and out to Gravesend Bay. The Atlantic now lay dead ahead, but it was too cold to sail overnight down the New Jersey coast and also getting dark already.

A friend had suggested an anchorage called Coney Island Creek, at the same time warning me to favor the port side close to the rusted, sharp, steel ship’s wreckage lining the entire creek, to avoid the sand bar at the entrance. Of course, it was a narrow channel. Much to my surprise, it was marked the entire way in, a fact that had not been denoted on my chart.

There was plenty of room to anchor once past the abandoned MTA ferry terminal there, and I dropped the hook in the middle of the half-mile-long creek as the sun set, this time on the buildings of Brooklyn. The famous Coney Island Ferry was just on the other side of the land spit. I thought of all the movies set in historic Brighton Beach as the lights of the Verrazano Bridge twinkled in the near distance. I was now on the outskirts of one of the busiest harbors in the world. But New York wasn’t done with me just yet.

The wind was still stiff and cold when I woke up in the morning, so I paddled ashore among the hypodermic needles and homeless people encampments. It was not the Brooklyn of my daydream. That night the wind calmed down, the temperature plummeted, and I lit a fire in the wood-burning stove, ready to catch the tide at first light. A small generator ran on deck to charge the electric motor, but only a little, because I couldn’t stand the noise. I didn’t have a care in the world as it was only a 30-mile daysail to the next inlet.

Suddenly, I heard the sound of another motor and felt a big wake rock Teal. I was surprised because I hadn’t seen another boat in the creek in two days. Farther up the creek there were a few small powerboats, so I figured it was a local—at least until I heard someone yelling about what sounded like a light.

Popping my head out the companionway I yelled, “I have an anchor light!” as yet another light shone in my face from what looked like a Boston Whaler. “No,” the voice called over the sound of the motor and generator, “are you alright?!”

Was I alright? Of course, I was! I turned off the generator but still could barely hear. I yelled that I was fine. The boat got closer, and the man driving it introduced himself as Tony. Apparently, some people on shore had reported seeing someone in distress. Tony pointed to the sky above and the NYPD helicopter now circling us. That was why it was so hard to hear. I asked him what was going on. He pointed to the fire trucks and police cars on shore. “They’re all for you,” he said. The people on land had never seen a girl on a sailboat before and assumed I needed to be rescued.

“You know how people talk,” Tony said in a thick New York accent. “They gossip.”

I remained in disbelief, as Tony motored to shore to consult the authorities. He came back shaking his head, yes, vigorously. I laughed and continued to shake my head, no. To which he replied in repetition, pointing to the now four fire trucks, one helicopter and two police boats coming our way. “It’s all for you, Emily—it’s all for you.”

Now officially dubbed Coney Island Tony, we high-fived before he sped away. He invited me ashore in the morning for coffee and a bagel. Sadly, I couldn’t make it, as I still had to convince the authorities I had never been in distress and needed to leave first thing with the tide.

Under sail again at dawn I turned on the VHF radio and heard two separate pan-pan calls that were for none other than me—a report of someone in the water, from both my kayak adventure along the pier on the Hudson and anchoring in Brooklyn. Past the tankers, tugs and barges in tow I finally got out of New York by reaching in west winds just along the New Jersey coast. I still had a week left until it was officially winter. The jagged rocks of the jetties leading into Manasquan Inlet looked terrifying, but I timed it right to sail in sheeting the main with a swift current behind me.

Once in the protection of the inlet I wasn’t really sailing so much as riding the tide. That’s why, when I tried to turn into the marked channel off to port, I got pulled sideways and ended up completely aground on the wrong side of the buoy. The tide was fully high, so I wasn’t going to just float off. Before I had a chance to think about what to do next a man by the name of “Captain Bill” at the fuel dock a few hundred yards away asked me if I needed help. When I said, maybe, he insisted on calling the local tow boat captain. I figured I might as well accept since some older friends of mine had thrust $150 into my hand on Cape Cod for towboat insurance. It was now once again getting dark. Remembering my self-steering wind vane, which I had deployed again earlier that that, I struggled to get its external rudder detached against the ripping currents. Hanging upside down over the stern I wrestled with the pin. When I finally got it, Captain Bill gave me a thumbs up from shore.

The tow boat came, pulled me off the shoal, and I tied up at for free at Capt. Bill’s Landing, regaling the now gathered crowd with the tale of my run-in with the rescue helicopter the night before. I had finally escaped New York. But New Jersey was off to a hell of a start.

What I did right

• Timed the winds and tides

• Had a lifejacket on and emergency gear when kayaking

What I did wrong

• Was underpowered coming into Manasquan

• Again, was heading south too late in the season